A recent news report from Vietnam features an exquisite and very ancient sculpture of Lord Vishnu. According to a press release from the Communist Party of Vietnam’s Central Committee (CPVCC) the Vishnu sculpture is described as “Vishnu stone head from Oc Eo culture, dated back 4,000-3,500 years.” Recently the Government of Vietnam, despite its official Communist doctrine, has developed many programs and projects highlighting Vietnam’s ancient religious heritage. Its scholarly and archeological research and investigations are legitimate and its conclusions are authoritative. This discovery of a 4,000 to 3,500 year old Vishnu sculpture is truly historic and it sheds new light upon our understanding of the history of not only Hinduism but of the entire world.

The fact is there are no other ‘officially’ recognized Vedic artifacts that have been dated back to such an early date. This would make Vietnam home to the world’s most ancient Vedic artifact. While there are indeed many other ancient artifacts that represent the same Deity, they are not presented in the ‘Indic’ tradition and cannot be directly recognized as the Vishnu of the Indic Vaishnava tradition.

The 4000-3500 year old Vietnamese Vishnu sculpture is part of an exhibit featuring some of Vietnam’s most ancient artifacts. It was discovered in the region of Southern Vietnam’s Mekong Delta. The Mekong (Ma Ganga) River is named after the Ganges River of India. The entire region was once the home to several ancient and prosperous Vedic Kingdoms and many intriguing and unique Vedic artifacts have been discovered. 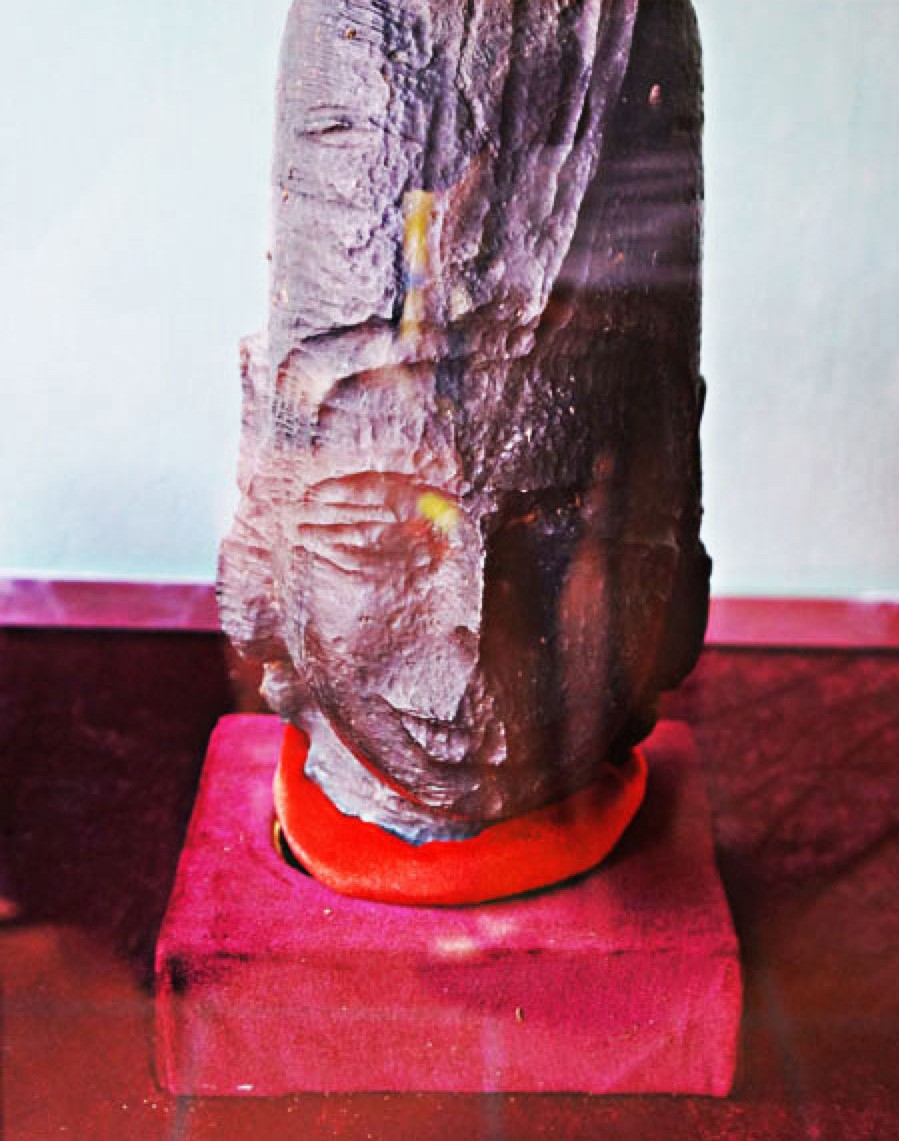 The Vishnu sculpture was officially presented during the 5th Quang Nam Heritage Festival which opened on June 21, 2013 in Hoi An City. The exhibition highlights many ancient objects dated from the Dong Son – Sa Huynh – Oc Eo eras of Vietnam’s ancient history.

“Entitled “Dong Son – Sa Huynh – Oc Eo cultures”, the exhibition put on display over 1,000 an cient objects which come from across the country and are made from diverse materials, from pottery to copper, including jewelry and farming tools, from the pre-ancient period belonging to the three cultures.

The significance of this discovery cannot be overestimated. The entire history of Hinduism and Vedic culture, as taught in the academic institutions of the world, has been built upon a false construct. According to mainstream academia Vedic ‘religion’ or Hinduism did not exist until the alleged ‘Aryans’ invaded India circa 1500 BC. An even later date is given to Vaishnavism which is speculated to have been derived from animist Sun worship. Yet here we have a highly evolved art form depicting Lord Vishnu in the Far South East r egion of Asia dated to somewhere between 2000 BC to 1500 BC.

This completely undermines the entire historic timeline developed by mainstream academia in regards to the development of both Vedic/Hindu civilization and Indian history.

The region of modern India has always been the epicenter of High Vedic/Hindu Civilization and culture. No one anywhere has ever suggested the region of modern Vietnam to be the origin of Hindu civilization yet it is in Vietnam that we now have the world’s most ancient example of Indic style Vedic Va ishnava art. Thus it stands to reason that if Vedic Vaishnava art, culture and religion flourished 4000 years ago in prehistoric Vietnam it was undoubtedly flourishing in ancient India as well.

Once again science and archeology have confirmed the Vedic conclusion. As the Vedic literature states 5000 years ago India was home to a highly evolved and advanced civilization. This civilization was centered on its sacred traditions. The worship of the Supreme Lord Vishnu, Lord Shiva, Lakshmi and Durga was widespread and in fact spanned the entire globe.

These traditions presented themselves in diverse manners, as seen in modern India, yet among this diversity was a commonality based upon the authority of the Vedic scriptures and traditions. The recognizably Indic forms of the Vedic traditions spanned the globe from the Philippines to the Middle East and Siberia to Australia. Yet the same Divinities were worshiped and the same traditions were practiced throughout the world.

The many recent Vedic discoveries from Vietnam are providing a new and sensational view into the authentic history of the world. Not only this, it presents a challenge to Modern India and its leadership. India is home to many startling and amazing artifacts yet they sit ignored and crumbling. In many cases looters and va ndals have destroyed many priceless examples of India’s ancient heritage. India’s leading academics and governing bodies are silent and if they do speak of India’s ancient Hindu heritage it is only to cast doubts and disparage India’s indigenous Vedic culture and Hindu traditions.

Astounding and marvelous ruins and artifacts that would be the pride of any other nation and people are, in general, ignored and forgotten and left to crumble into oblivion. Often they are threatened by the efforts of the various Governmental bodies in the name of progress such as the National Highways Authority of India’s (NHAI) recent attempts to destroy a 1000 year old Shiva temple in Tamil Nadu.

It is a great irony that the officially atheistic Communist Government of Vietnam exhibits more pride in its ancient Hindu heritage than the ‘Secular’ Democratic Government of India. The entire South Asian and SE Asian region was once home to many thriving Hindu Kingdoms and civilizations. The Encyclopedia Britannica writes regarding the Indian influence upon these regions “In the realm of politics, Indian influence accompanied the rise of new political entities, which, since they do not readily fall under the Western rubric of “states,” have been called mandalas. The mandala was not so much a territorial unit as a fluid field of power that emanated, in concentric circles, from a central court and depended for its continued authority largely on the court’s ability to balance alliances and to influence the flow of trade and human resources.”

Perhaps today, as India itself is reeling under the onslaught of enforced ‘secularism’ and as Hinduism has been relegated to the realm of just one of many religions, (rather than being recognized as the heart and soul of India,) we are fortunate that the former Hindu lands of Indonesia, Vietnam, Thailand, Myanmar, Laos and Kampuchea are leading the way towards the reclamation of our ancient Vedic heritage.