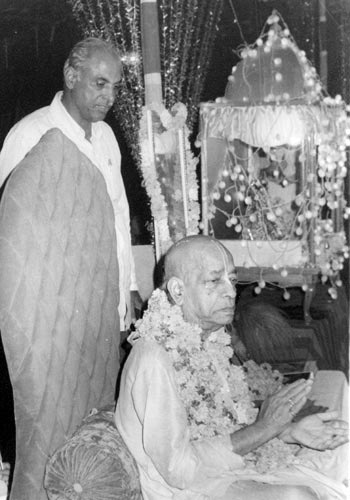 P.L. Sethi, a building contractor who assisted Srila Prabhupada in acquiring and building ISKCON's Juhu temple, passed away on February 16 in Mumbai, India. He was 88.

Although he was never officially initiated into ISKCON, Sethi always regarded Prabhupada as his guru. From the moment the two first met in 1971, Sethi became a life member and a staunch, loyal follower of Srila Prabhupada. That same year, ISKCON acquired four acres near Juhu Beach in Mumbai, dubbed it "Hare Krishna Land," and erected a temporary temple there. But former owners Mr and Mrs Nair weren't letting go easily. In the early 1970s, Mrs Nair convinced the Bombay Municipal Council through one of its members, Pushpakant Mhatre, to issue a demolition order on ISKCON's temporary temple.

Backed up by a large team of police, Nair's demolition squad invaded Hare Krishna Land. As police dragged away the protesting devotees, the squad began to dismantle the temple structure. But just as they were ripping the roof off the Deity room, with Sri Sri Radha-Rasabihari still inside, Bal Thackeray, leader of the local Shiv Sena political party, intervened and stopped them. The devotees took the case to the court, which granted permission to rebuild the temple. But there was a catch: the entire rebuild at to be done the day of the ruling, in time for a final High Court hearing scheduled the following day.

When P.L. Sethi, who had worked on the temporary temple, found out what had happened, he was shocked. Without barely missing a beat, however, he immediately assured devotees that he would reconstruct the temple in one day. Although it was a Sunday and no stores were open, Sethi managed to arrange for all the necessary materials from his own construction site, and amassed a team of laborers, masons, and painters.

At 9pm, just as he began the work, it began to rain heavily. But Sethi was unperturbed, recalling the ancient story of how Lord Krishna had lifted Govardhana Hill to protect Vrindavana's inhabitants from devastating rainfall sent by the god Indra. "Indra wants to test me," he thought. "All right, send the rain, send the rain as heavily as you want — but I have the blessings of Srila Prabhupada. I have a temple to build, and I will build it."

It seemed as if all the forces of the universe were out to stop Sethi in his mission. At 11pm, Mrs Nair's demolition squad turned up again, threatening to send one hundred and fifty gundas (hired thugs) to stop the work. But Sethi, a proud member of the Punjab warrior race, was unfazed. He picked up his rifle, handed a pistol to his son Brijmohan, and said defiantly, "Let them come. They might be one hundred and fifty, but we have two hundred bullets!"

Sethi and his son stood waiting, but no gundas came. His courageous words had met their mark. Toiling away through the night, Sethi's team completed work on the temple by 4am, just in time for the morning mangala arati prayers.

Later that day, Justice Nain issued the court's verdict: "What is built is built, and no one can demolish it." It was a great victory. Srila Prabhupada was extremely appreciative, praising Sethi's bravery and service to the Hare Krishna movement.

Later, when the battle to acquire the property was over, Prabhupada engaged Sethi in building the upper floors on all the existing apartment blocks at Hare Krishna Land, saying: Just as you are building rooms for the devotees, Krishna is building rooms for you in Goloka Dhama.

During his last days, Sethi repeated these very words to his family to comfort them. As he neared the end, he would utter only the words: "Radha Krishna" and "Srila Prabhupada," ceasing all other communication. When it became evident that Sethi would leave soon, the devotees of ISKCON Juhu's Radha-Rasabihari temple gathered in his house and sang kirtan to him 24 hours a day. It was in this setting that Sethi peacefully left this world.

P.L. Sethi always spoke about Srila Prabhupada with great love, and his greatest joy was to invite devotees to his house and serve them. Throughout his life, he always engaged all his assets and his family members in Srila Prabhupada's mission.