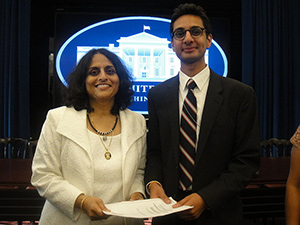 The ancient Indian spiritual text Srimad-Bhagavatam recounts how 5,000 years ago, Bhumi Devi, the presiding Deity of the Earth, was being plundered and destroyed by evil men. Assuming the form of a cow, she approached the creator Lord Brahma for help, with tears in her eyes.

Today, thousands of years later, mother Earth is again under attack. And with teachings that advocate a simple lifestyle protecting the land and animals, Hinduism’s leaders have a responsibility to encourage their temples to ‘go green.’

The project was born in early 2009, while Gopal-lila was working as a part-time intern at the Oxford Centre for Hindu Studies.

At the time, the United Nations Development Programme had approached the British charity ARC (Alliance of Religions and Conservation), to engage major faith groups in working on environmental issues.

The ARC turned to the Oxford Centre for Hindu Studies to facilitate an international effort to encourage Hindus to be more mindful of their impact on the environment.

The OCHS agreed. Its director, ISKCON member Shaunaka Rishi Das, assigned the task to Gopal-lila, who is now working full-time on the project.

“Over the next six months, we hosted several meetings at OCHS with the leaders of major UK temples,” he says. “They included the Balaji temple in Birmingham, the Sanatan Mandir in Leicester, the Swami Narayan temple in Neasden, and ISKCON’s Bhaktivedanta Manor.”

As well as Bhaktivedanta Manor’s president Sruti Dharma Das, other ISKCON devotees were brought in to develop a nine-year plan, including Sita Rama Das of the Manor’s violence-free milk brand Ahimsa, author and activist Ranchor Prime, and Navina Krishna Das of the Krishna Avanti School.

The plan was launched along with those of other faith partners in a celebration at Windsor Castle in November 2009, attended by Prince Philip and Secretary General of the United Nations Ban Ki-Moon.

The plan included developing a worldwide network; partnering with major conservation projects; starting a Bhumi Awards to recognize good environmental practices; organizing academic conferences and online seminars to teach the Hindu perspective on the environment; and promoting the Ahimsa Milk project with a view to replicating it throughout the world.

As well as these, one of the efforts most central to the Bhumi Project is, of course, encouraging Hindu temples around the world to be more environmentally friendly.

“The first thing every temple should do is get rid of those horrid Styrofoam plates, and use a biodegradeable alternative,” he says. “Even if they can’t completely eliminate plastics, at least they can bring in twenty to fifty per cent biodegradeable dishware.

Temples can also begin using organic milk for all food preparations, and specifically for offering to the Deities. Or, even better, milk taken from their own protected cows.

“The way cows are treated on conventional farms is not in line with Vaishnava teachings,” Gopal says, explaining that for the past few years at Bhaktivedanta Manor, only organic milk has been accepted as a donation.

Finally, the Bhumi Project encourages temples to develop their own community gardens and to use organic methods to grow fruit, vegetables and flowers for the Deities and devotees.

If the temple itself doesn’t have the space for a garden, it can encourage its congregation to grow food in their own gardens and bring it to the temple to offer to the Deities.

“I think that ISKCON temples could move a little way in the right direction on all three of those points,” Gopal-lila says. “If the desire is there.”

And the desire is there, at least in some ISKCON communities around the world. Gopal has received an enthusiastic response to his presentations in New Mayapur, France; Radhadesh, Belgium; and Washington D.C., USA to name a few.

In New Mayapur, gardener Giri Govardhana Das is already tending to 1,000 rose bushes and growing a variety of vegetables, flowers and herbs. Four oxen till the land, and six cows yield high quality violence-free milk for the Deities.

At the Potomac temple in D.C., gardener Shyam Gopal Das is coaxing an impressive bounty of vegetables, flowers and herbs from just one third of an acre, using holistic natural gardening techniques.

Meanwhile in Radhadesh, as in New Mayapur, devotees milk their own cows to offer violence-free milk to the Deities.

And there are other temples that have started their own community gardens, use violence-free milk, or have introduced biodegradeable dishware.

Of course, broad and inclusive as it is, the Bhumi Project’s work isn’t just with ISKCON. In the US, the project has developed a partnership with the Hindu American Seva Foundation. It has also partnered with Hindu American Seva Communities, alongside which it presented its Green Temple campaign at the White House in August 2011.

Meanwhile in Nairobi, Kenya, Bhumi is working closely with the Hindu Council of Africa, as well as a team of environmental engineers and scientists.

“We launched a nine-year-plan there in September 2012 that is based on our international plan, but takes into consideration the unique challenges and needs of the Hindu community in Africa,” Gopal-lila says.

In India, Bhumi recently launched a national chapter of the Green Pilgrimage Network, an ARC effort to make holy places around the world more environmentally sustainable.

Working closely with Swami Chidanand Sarasvati of the Parmarth Niketan Ashram in Rishikesh, Gopal-lila has been meeting with both religious leaders and city officials in holy towns all around India.

So far, Varanasi, Rishikesh, Vishakapatnam, and the sacred town of Vrindavana, where Lord Krishna is said to have appeared 5,000 years ago, are all on board the Green Pilgrimage plan.

Bhubaneshwar, Tirupati, and Ujjain are also close to agreeing to the plan, as is Puri, where both the king and the administrative head of the Jagannath temple have given it their endorsements.

Partnering with ICLEI, an NGO that works with local governments on sustainability issues, Bhumi will be conducting environmental audits at five religious sites by this July, beginning with Varanasi and Rishikesh.

The audits will yield reports on how many pilgrims each town can accommodate on a given day, the pressures they would put on sanitation, water and energy, and other concerns. Based on these ICLEI will then give recommendations and approach various international funding and aid agencies, as well as local governments, to fund specific projects.

Awareness will also be raised amongst the pilgrims themselves to leave a positive footprint at pilgrimage sites. The ARC has advised that ways to do this include taking away your own litter and that of others; trying to avoid buying bottled water; eating local, organic food; choosing tourist agencies with a sustainable ethos; buying only sustainably sourced souvenirs; and walking rather than driving.

More ambitious tourists can also engage voluntarily with social and ecological programs; financially support programs to improve the city environment and biodiversity; and share ideas and inspiration with other pilgrims and city residents.

ISKCON devotees in particular can consider doing these things in Vrindavana, their holiest of sites.

“I think we have to think seriously about ISKCON’s responsibility in the upkeep and care of the dhama,” Gopal-lila says. “Because I think that more than most, we have a really serious responsibility for the future of Vrindavana.”

As well as caring for pilgrimage sites, the Bhumi Project is also looking to develop environmental standards and guidelines for various industries in India, beginning with the mining industry.

“Industry heads in India are mostly Hindu, and most of them want to be good Hindus,” says Gopal-lila. “So rather than trying to enforce environmental standards from an economic or governmental point of view, we’re trying to appeal to their religious sensitivities. We find that when we use that argument in India, they usually agree and ask how we can work together.”

In the next year and a half, the Bhumi Project will focus its energies on setting up regional offices with full-time staff around the world. The first of these likely to show up is an Indian office in Mumbai, which will see Bhumi partnering with ISKCON Chowpatty. An African office as well as a North American one, most probably in New York, are also on the cards.

The Bhumi Project is also set to produce a book on Hinduism and the Environment with Mandala Publishing, featuring writers from across the spectrum of Hindu paths, including Vandana Shiva, Deepak Chopra, Satish Kumar, and Radhanath Swami.

In the long term, Gopal-lila hopes to establish Bhumi as its own NGO, separate from the Oxford Centre for Hindu Studies, where it’s currently based. And he hopes that over time, caring for Bhumi, or mother Earth, will become more of a priority for ISKCON devotees.

“For devotees of Krishna, care for the environment is so central,” he says. “Just look at Krishna’s own life. He was tending the cows in the forest, on the banks of the Yamuna. He lived in harmony with nature. And Srila Prabhupada was also an environmentalist, in his own way. So in light of the environmental credentials of Srila Prabhupada and the previous acharyas, I think we in ISKCON need to re-evaulate a lot of the things we do. I think there’s a lot we can learn from them.”