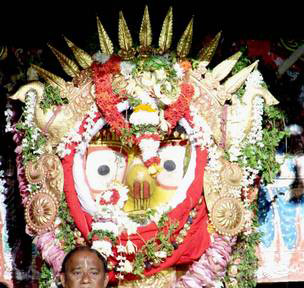 This article is called The Case of Subhadra because what started off as a seemingly simple question with what would appear to be a straightforward answer, turned out to be a case study.

The initial question was, "Is Subhadra Yogamaya?" The answer many of us have heard is "Yes" and rightfully so. But it is not as easy as all that. A simple ‘Yes’ doesn't work in all circumstances.

When we hear the name Subhadra what comes to mind? Naturally one thinks of the sister of Krsna. So what is the history of Krsna's sister? Where is she born? Who are her parents? What potency is she?

To protect the fearful Yadus from Kamsa's attack, the Supreme Soul of all, ordered Yogamaya as follows. (Bhag.10.2.76)

O My auspicious potency, who are worshipable for the entire world and whose nature is to bestow good fortune upon all living entities, go to Vraja, where there live many cowherd men and their wives. In that very beautiful land, where many cows reside, Rohini, the wife of Vasudeva, is living at the home of Nanda Maharaja. Other wives of Vasudeva are also living there incognito because of fear of Kamsa. Please go there." (Bhag. 10.2.7)

Within the womb of Devaki is My partial plenary expansion known as Sankarsana or Sesa. Without difficulty, transfer Him into the womb of Rohini. (Bhag. 10.2.8)

O all-auspicious Yogamaya, I shall then appear with My full six opulences as the son of Devaki, and you will appear as the daughter of mother Yasoda, the queen of Maharaja Nanda. (Bhag. 10.2.9)

By sacrifices of animals, ordinary human beings will worship you gorgeously, with various paraphernalia, because you are supreme in fulfilling the material desires of everyone. (Bhag. 10.2.10)

In different places on the surface of the earth, people will give you different names, such as Durga, Bhadra-Kali, Vijaya, Vaisnavi, Kumuda, Candika, Krsna, Madhavi, Kanyaka, Maya, Narayani, Isani, Sarada and Ambika. (Bhag. 10.2.11)

Above, Srimad Bhagavatam says that the daughter that was born to Nanda and Yasoda was indeed Yogamaya but she is not known as Subhadra. The word bhadra used in verse 10.2.7 means auspicious. In verse 10.2.11 Krsna says that in the material world his Yogamaya potency will be known as Durga, Bhadra-Kali, Vijaya, Vaisnavi, etc, but again Subhadra is not mentioned.

In his Sarartha-darsini commentary to verse 10.2.10 Sri Visvanatha Cakravarti says:

"Your amsa, material maya, will be taken by Vasudeva to cheat Kamsa. You will be worshipped in various forms at the Vindhya Hills and other places. All men will worship you because you are the supreme goddess of those who have all types of material desires."

It seems clear that the daughter born to Yasoda was indeed Yogamaya, but that the female child that Vasudeva took to the palace dungeon of Kamsa was Mahamaya, the external potency of Krsna. In neither instance is she known as Subhadra.

Vasudeva begot his eldest son Rama (Balarama) in Rohini; and their other sons are: Sarana, Satha, Durdama, Damana, Svabhra, Pindaraka, and Usinara; O descendant of Kuru, they also had a daughter by the name of Citra, who is renowned by the name of Subhadra. (1.35.5-6)

This is my sister, O Partha, and born of the same mother as Sarana (this refers to Rohini, the mother of Sarana). May you be blessed. Her name is Bhadra and she is the favorite daughter of my father. (Adi-parva 221.17)

From previous acaryas we have quotes regarding Subhadra, some stating that she is Yogamaya, some that she is Mahamaya and some that she is bhakti-svarupa. The exercise is in how to harmonize the statements of different acaryas. Some quotes from A.C. Bhaktivedanta Svami Prabhupada are as follows:

Subhadra is Yogamaya, The spiritual energy is called Yogamaya. And she had 16 different expansions. Out of these 16 expansions, Subhadra is one. The Mahamaya of the material energy is also expansion of the energy of Yogamaya; and both Yogamaya and Mahamaya are equally important to Krsna as much as any government department is equally important for functioning the government. (Letter to Madhusudana – Montreal 29th July 1968)

Regarding your question about Subhadra and Durga, they are not at all the same. Durga's other name is Bhadra, not Subhadra, and Durga's activities are within the material world. Subhadra does not work as Durga. Subhadra is internal energy, and Durga is external energy. As energy they have a relationship as much as we are energies of Krsna, but the energies are working in different capacities. (Letter to Hamsaduta – LA, 9th Feb.1969)

In 1872 Sri Bhaktivinoda Thakura wrote an essay for a newspaper in Cuttack, Orissa about the Deities of Jagannatha, Subhadra and Baladeva as they are manifest in the temple at Jagannatha Puri. An excerpt follows:

In the middle room [of the temple], there is an elevated seat on which stand four different forms, viz., Jagannatha, Balarama, Subhadra and Sudarsana. According to the Vedanta, God is one without a second, but He has infinite energies and attributes which are not fully known to man. But then man perceives only three energies in God, because he has no other corresponding sides to understand the other powers. From one of the energies proceeds matter in all its different forms and properties and this energy is styled the maya-sakti of God. From the second energy proceeds all spiritual creation, in all its relations and phases. This power is entitled the jiva-sakti of God. The third energy perceivable by man is the energy of Will, which is called cit-sakti. God moving in creation is what is meant by this infinite energy.

Jagannatha is the emblem of God having no other form than the eyes and the hands. They mean to show that God sees and knows and creates. Balarama is jiva-sakti of God; Subhadra is the maya-sakti and Sudarsana is the energy of will." (The Temple of Jagannatha at Puri, 1872)

Before bringing this article to a conclusion we shall also quote from the archives of the acarya, Svami B.R. Sridhara Deva Gosvami Maharaja as follows:

Subhadra-devi has been said to be the representation of bhakti in general, devotion. Balarama, Jagannatha, Subhadra. Guru, bhakti and Krsna — the ultimate end, the devotional process and Baladeva as guru to help. Subhadra – bhakti-svarupa. Not sakti or other svarupa. Subhadra was not in Vrndavana, she was born in Mathura."

From our previous Gaudiya Vaisnava acaryas we have three opinions on the ontological position of Subhadra. Prabhupada says she is Yogamaya. Bhaktivinoda says she is Mahamaya. And Sridhara Maharaja says she is bhakti-svarupa. How to harmonize?

After chastising Kamsa in her multi-armed form while in the dungeon in Mathura, that supremely wonderful Goddess (Mahamaya) left that place to go to the Vindhya Hills to be worshiped in the forms of Durga, Bhadra-Kali, etc. Hence, she did not return as such to take part in the lila of Krsna.

Ultimately, the internal energy of Krsna is one, which manifests as many according to the Lord's will and the requirement of His lila (acintya-bhedabheda). It has also been noted that the use of the word ’yogamaya’ in the vocabulary of the acaryas is interchangeable with the word ‘mahamaya’. Accordingly, the sister of Krsna is one-energy manifesting as different personalities (Yogamaya, Mahamaya and bhakti-svarupa) according to the required service.