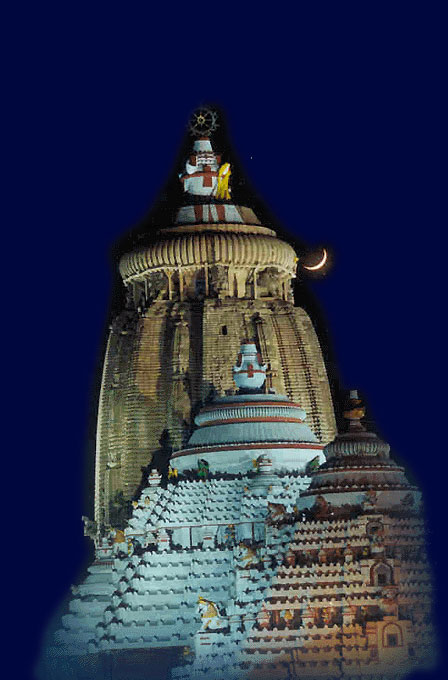 Srikshetra – Jagannath Puri, the soul of Odisha, has been identified as the most sacred place on the map of India's east coast. It is surrounded by the Bay of Bengal to the east and is considered the summer capital of Odisha. The great temple of Lord Jagannath at Puri is a living, vibrant temple. It attracts religious preachers, propagators, saints, devotees, pilgrims and tourists from all corners of India, and also from abroad.

Odisha is known as the land of Jagannath. The word Jagannath literally means 'The Lord of the Universe.' It is one of the four major Dhams of India, known as Srikshetra, Nilachala, Niladri, Purusottama Kshetra, Sankha-kshetra and many other names. Jagannath chetana is a compendium of all cultural, spiritual philosophies and human experiences. Jagannath is the symbol of universal love and brotherhood.

Construction of the present temple was initiated by King Anantabarman Chodaganga Dev in the middle of the eleventh century and completed during the period of King Anangabhima Dev III in the initial part of twelfth century. The Chaturdha Murti in their present shape were established on the high platform inside the inner sanctum of the temple during 1305 AD.

The temple of Jagannath is one of the greatest religious monuments in India. The art and architecture of the temple has been developed with royal patronage, and is a combination of Dravida (South Indian) and Nagara (North Indian) style. During the 6th and 7th century, the tri-ratha type of temple building was in vogue, but with the passage of time the tri-ratha type gave way to pancha-ratha type, of which Jagannath Temple is the finest example.

The pancha-ratha consists of two Anu-rathas, two Konakas and one Raha. The Deities have been considered as head of the State and are therefore provided with all royal facilities such as the Jagamohana (audience hall), Nata Mandapa (dancing hall) and Bhoga Mandapa (dining hall). Over and above that, the principal Deities have been provided with sufficient gold ornaments, valuable dresses, elephants, horses and a magnificent abode, i.e., Viman for their comfortable residence.

The base of the Viman is square, The erected part being circular up to the top (Sikhara) of the temple. The Jagamohan is like a pyramid; the base is square in size and step-by-step projects upwards. The Viman has the following five parts: Bhumi, Bada, Gandi, Mastak and Dhwaja. It is a Rekha Deula with a curvilinear super structure.

The Bada has five sub-divisions: the Pabhaga, Tala Jangha, Bandhana, Upar Jangha and Baranda. The Pabhaga contains all its normal five sub-divisions such as khura, kumbha, pata, kani and basanta, with reference to the then architectural system. On the top, the great Amalakasila and Kalasa are placed to maintain the structure's proper balance.

Different portions of the Jagannath Temple resemble different parts of the human body. The feet with fingers, knee, upper part of the knee, waist, belly, heart and lungs, shoulders, neck, mouth, skull, upper part of the head, and brain of a human being can be compared correspondingly with that of padapitha, bandhan, upar jangha, basant, garbha griha, raha, visama, kantha, amalaka, khapuri, kalasa and ayudha of the temple. In other words, the temple is a model of the human body. A man finds God within the temple so also within himself in his Anahata Mahacakra. After de-plastering of the Sikhara, 24 angasikharas are now visible, Ganesh is found on the topmost angasikhara and the other Deities seen there are Brahma, Goddess Kali, Nataraja, Surya and Siva. The remaining niches are mostly occupied by Vishnu.

There are three Nisa temples in the shape of covered halls with sikharas, on three outer sides of the Viman at its bottom, with three Parsva Devatas: Varaha in the south, Nrusimha in the west and Trivikrama in the north. The images of twenty-four forms of Vishnu have been carved on the front walls of these three temples i.e., eight images in front of each temple.

The Garbhagriha or Manikota is the main inner part of the Viman or main temple. Sri Jagannath, Sri Balabhadra, Sri Subhadra, Sri Surdashan, Sri Madhav, Sridevi and Bhudevi are placed on a raised platform known as Ratnavedi or Mahavedi, its size being 16 ft. long, 13 ft. wide and 4 ft. high. Devotees move around the Ratnavedi, if they so like.

The door of Garvagriha is Kalahat Dwar. Jagamohana or Mukhasala is also a pidha deula; it stands on four squared pillars. This is the main portico before the innermost apartment. People get the darshan from this part. It has two gates, one towards the Mukti Mandap and the other towards the Natamandir. The door towards Natamandir is known as Jaya Bijaya dwar, the dwarpalas being Jaya and Bijaya.

In Natamandap (Dancing Hall) the Devadasis used to perform their daily dancing. The mandap stands on 16 pillars in four rows. On its eastern side there is the famous Garuda Pillar with the image of Garuda on the top. Darshan of Chaturdha Murti from the backside of Garuda Stambha is the colloquial ethical procedure followed in Srimandir. Garuda's bath water (Garuda paduka) is not only pure, but has much medicinal value; people use it to get rid of many diseases.

On the wall of the Natamandap, behind the Garuda Pillar, Brahma and Siva are found standing and offering prayers to the Lord with folded hands. Ten incarnations of Vishnu are seen in southeast corner of the Mandap. Nata Mandap has two main gates, one towards the south and the other towards the north and another four small subsidiary gates. The south main gate is known as Panda-dwara. There are seven steps in the north main gate, popularly known as Sata Pahacha. The deities go to the Car festival and Snana Mandap along these steps. The Mandap contains many pattachitras on which pictures of various deities have been painted.

The Bhogamandap is also a Pancharatha pidha deula. It is made of yellowish sandstone rendered red by ochre paint. The entire structure rests on four pillars and it has four openings. At the time of offering Bhog to Their Lordships, the connecting door to Natamandap remains open for a direct vision of God towards the offerings. Inside the Bhogamandap no paintings are there, but the outer walls have stone carvings depicting many pastime scenes, such as Krishna grazing cows and dancing with the Gopies, Dola yatra, Rama Abhisek, Siva on a bull, the king worshipping Lord Jagannath, Siva Linga, Durga, etc.