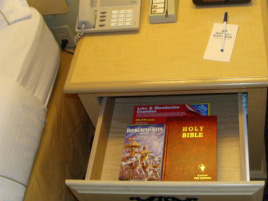 It’s about to get crowded in your hotel room nightstand. The newest addition could soon be a sacred Hindu text called the Bhagavad-Gita.

The Bhagavad-Gita is literally translated as “song of God” and is a discussion between Lord Krishna and his student, Arjuna, on revealing one’s spiritual identity and a relationship with God, says Vaisesika Dasa, founder and president of the Motel Gita project, the group behind the effort.

Motel Gita, with the help of a Hindu nonprofit, has distributed approximately 150,000 copies of the Bhagavad-Gita to 1,100 hotels and motels. Dasa said their goal is to place at least 1 million books to, “provide solace to traveling souls by giving them spiritual knowledge.”

The idea for the project came to Dasa after seeing the positive effect the Bible has had on hotel guests for many years he said. Dasa partnered with Milan Doshi and Dilip Patel, who has been involved in the hotel industry for more than three decades. They started by distributing Bhagavad-Gitas to hotels in the San Francisco Bay Area.

At first they worried guests and hotel owners wouldn’t accept the books, but Dasa said, “we quickly found that prominent motel owners whole-heartedly welcomed and supported this program and that their guests were appreciating finding the Gita.”