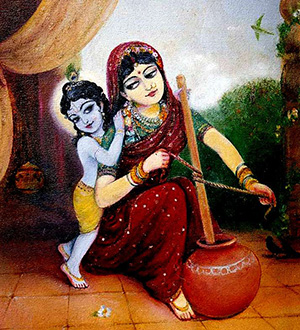 In śāstra, it has been declared that the month of Kārtika possesses the greatest significance in connection with the practice of devotion to Śrī Śrī Rādhā-Dāmodara. This month is sacred to Dāmodara and should be spent in non-stop service while residing in the holy city of Mathurā.

Śrī Kṛṣṇa was born in Mathurā. The modern city occupies practically the site of ancient Mathurā on the river Yamunā. About six miles to the north of Mathurā is Vṛndāvana, and about seven miles to the southeast is Gokula. All three places are located on the banks of the Yamunā; Mathurā and Vṛndāvana being on the western and Gokula on the eastern bank of the river.

After His birth, which took place in the middle part of a dark and tempestuous night, Śrī Kṛṣṇa was immediately taken to Gokula by His father Vasudeva, who crossed the Yamuna, which was then in flood, by wading on foot. Vasudeva and his wife Devakī had been confined in a strongly guarded prison by King Kaṁsa. Vasudeva easily got out of the prison, and performed his journey to Gokula and back, completely unseen by anyone. He left the newborn baby in Gokula in the home of Nanda and brought back with him the newly born daughter of Yaśodā, before the close of the night.

When Kiśora-Kṛṣṇa was twelve years old King Kaṁsa ordered Him to attend a sacrifice at the capital, so He came back to Mathurā from Vṛndāvana, where He had been living with Nanda and Yaśodā. Śrī Kṛṣṇa arrived in Mathurā with Baladeva. He killed Kaṁsa, released His parents from captivity and lived in Mathurā with them for some years. The city of Mathurā was then beleaguered by King Jarāsaṅdha. It was finally given up by Śrī Kṛṣṇa, who then made Dvaraka His capital.

These events are described in detail in the Śrīmad-Bhāgavatam and other Purāṇas.

Dāmodara is the name of Kṛṣṇa. While an infant, Kṛṣṇa had submitted to being bound to a wooden husking-stand by Mother Yaśodā by means of a cord tied around His belly. ‘Damodara’ means literally ‘one with the cord around his belly’.

It is enjoined that those who observe the Urjja-vrata during the months of Kārtika in the holy city of Mathurā practice strict asceticism. They must spend the whole day and night hearing discourses and chanting the name of Kṛṣṇa in the company of devotees. Such strict observance of the Kārtika vrata, when performed with faith in the company of pure devotees, produces the genuine inclination to serve Śrī Kṛṣṇa.

Yet, it may sometimes be seen that even though someone has outwardly followed the rules enjoined in śāstra for the month of Kārtika and lived in the holy city of Mathurā, they are not blessed with that very rare inclination to serve Śrī Kṛṣṇa; but such mishap does not prove śāstra wrong.

Association with the pure devotee is possible and effective only by his own causeless grace. Residence in Mathurā is affected by the mercy of the pure devotee. Mathurā is superior to Vaikuṇṭha. Vaikuṇṭha does not descend to this world. Mathurā has greater power of magnanimity and displays a higher manifestation of the activities of the Absolute than does Vaikuṇṭha. But we must not suppose that it is possible for any person to become eligible to truly live in Mathurā in the same way that one moves to some geographical location on this mundane plane. In order to attain the eligibility to reside in Mathurā, it is necessary to practise association with the sādhus, chant the holy name, listen to the Bhāgavatam and worship the lotus feet of the holy image with spiritual faith. Even those who help others along in such functions, in any way, also perform the function of sādhus.

Residence in Mathurā is no doubt the adored object of our spiritual endeavors. But we also know that Kaṁsa was a resident of Mathurā. Did Kaṁsa thereby obtain the fulfilment of worshipful service? Kaṁsa desired his own pleasure, not the pleasure of Kṛṣṇa. He wanted to misappropriate the pleasure that belongs properly to Kṛṣṇa alone. Kaṁsa attained the state of inactive, self-pleasure as the reward of being killed and liberated by Śrī Hari. He did not attain the plane of intimate service to Śrī Kṛṣṇa in the realm of Mathurā, although he had been, to all appearances, a resident of Mathurā.

A person can find himself in the real Mathurā through his pure disposition to serve. Kaṁsa tried not to serve, but to enjoy Mathurā. But Mathurā is the plane of unalloyed spiritual existence in which Kṛṣṇa manifests Himself to the serving consciousness of His pure devotees in His own, true form. Mathurā is possessed of the quality of perfect spiritual initiative. Mathurā is not any mundane country that possesses no consciousness of its own. We can practice our enjoying mood towards inanimate mundane countries, but if we try to live in Mathurā in that mode, we will miss the experience of residence in Mathurā, for she is an object of worship. Those who serve Mathurā are enabled, by virtue of their discipleship of Mathurā, to serve the manifestation of the birth of Kṛṣṇa in the inner Mathurā of their own pure hearts.

On the plane of the divine Mathurā, the cognitive manifestation is not the mere relative, mundane function. The cognitive function that displays itself in Mathurā has no relation to ay form of mundane activity or inactivity. The pure cognition there is absolutely self-contained in Mathurā’s purely spiritual manifestation. This cognition is indivisible. Our former master, Śrī Mādhavendra Purī, has sung the glory of Mathurā in his famous couplet: “There is Mathurā in the ear, Mathurā in the mouth, Mathurā in the heart, Mathurā now, and here Mathurā, only Mathurā, exceedingly sweet, yes most sweet.”

The denizens of Mathurā are the servitors of Kṛṣṇa. Here in Mathurā, everything is engaged in the service of Kṛṣṇa and there can be no entity who does not serve Kṛṣṇa; and no experience except the realization of service to Him. Every tiny creeper, every little blade of grass in Mathurā occupies a position of superiority to me. Every one of them is my guru; the servant of my Kṛṣṇa. If one’s judgement reaches this point, only then is it possible for him to be a resident of Mathurā. Residence in Mathurā means the attainment of eligibility to serve all those entities who are eternally engaged in the service of the nativity of Kṛṣṇa.

Śrī Māyāpura is identical with Mathurā. In Mathurā, the Lord of Vaikuṇṭha, He who is not subject to mundane birth, manifests His eternal transcendental nativity.

People of this world perform the worship of māyā at the close of the rainy season. Māyā means that power by which one is enabled to measure or comprehend an entity of this mundane world by one’s defective faculties. This function is performed toward the shadow of the reality. This measuring propensity is the root cause of all of our miseries. Our unserving disposition is responsible for our inclination to engage in such activities. Māyā dresses us up as imaginary lords of this phenomenal world, but Yogamāyā makes us spiritual servitors of the Divine Pair, Śrī Śrī Rādhā-Dāmodara.