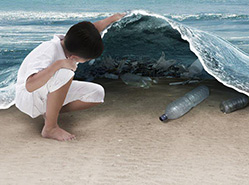 Representatives from ISKCON, Environmental Non-Government Organizations (NGOs) and other Hindu organizations presented letters to Ambassadors at Indian Embassies in several capitals of the world including Washington D.C., London, and Brussels (European Union) this week in connection with the Sri Krishna Janmastami holiday, expressing their grave concern about deadly levels of pollution now affecting India’s Yamuna River.

The river is considered sacred by hundreds of millions of devotees in India and worldwide, and is particularly connected with the pastimes, or lila, of Lord Sri Krishna.

Representatives of International Society for Krishna Consciousness (ISKCON) joined the Association of United Hindu and Jain Temples (USA), Friends of the River (USA), Hindu American Foundation, Hindu Council UK, Hindu Forum of Europe, Hindu Forum of Britain, National Council of Hindu Temples UK, and many other esteemed local and international organizations in presenting a shared letter to the Ambassadors in their respective Embassies, stating that:

“It is with a heavy heart that we bring your attention to the plight of the river Yamuna…a traditional water resource and pilgrimage destination for millions of people. Ancient scriptures, traditional and contemporary art, music, festivals, and even the Indian National Anthem demonstrate the tremendous esteem in which the river is held…The Yamuna, along with the Ganges, is a cultural icon and defining symbol of India. Yet, the United Nations website (UN-HABITAT) has declared that the Yamuna River downstream of New Delhi is now officially ‘dead’.”

Studies have shown that 97% of the water from the Yamuna has been diverted away from its natural riverbed before it reaches New Delhi, India’s capital city. A report compiled in 2006 by the Central Pollution Control Board of the Indian Government stated there is “almost no fresh water in the river” from Delhi on.

“This is a call to action,” said Brajraj Sharan, spokesperson for the India-based Save the Yamuna organization. “We know the Government is concerned about the environment. This is an opportunity for them to demonstrate their commitment to protect India’s ecology and her people.”

The religious groups and NGOs are calling for the Indian Government to live up to India’s own Supreme Court High Powered Committee ruling of 1998 that said: 1) Sewage should be diverted away from the Yamuna River and be treated, 2) The states through which the river flows should maintain a constant and adequate flow of natural fresh flow in river Yamuna throughout, to protect and preserve the river’s ecology.

Despite a Supreme Court ruling, and public and private pronouncements of support from Government officials, little has been done to resolve the crisis.

Thousands of pilgrims from around the world—including many members and friends of ISKCON—that visit the Yamuna annually also face tremendous health risks.

On May 27, 2012, The Hindu, a prominent Indian newspaper, reported that two pilgrims, a mother and daughter, died, and other family members fell ill, while bathing in the Yamuna near Vrindavana, UP. After entering the river and apparently sipping the water, they started vomiting. Although rushed to the district hospital, the mother and daughter died soon after.

The letters to India’s Ambassadors coincided with a rally in Mathura, Lord Krishna’s birthplace, on the 8th of August, to demonstrate local support for cleaning up the Yamuna and protecting those who live beside her.

Organizations signing on the letter in the USA:

Friends of the River
Sacramento, CA