A few days ago I was intrigued by an article in the Hindustan newspaper about a sant who had been planting tens of thousands of trees on the side of Govardhana for the past five years, calling it a “green revolution.” From the article, I learned that not only had he slowly begun the operation of planting, but that he had put into place an elaborate system of irrigation and caretaking that had resulted in a considerable greening of this most sacred spot in Vraja.

Rather than simply translate the article, I decided I wanted to follow up personally and get more information about this sant, Jugal Kishore Dasji, in order to see what kind of man he is and what motivates and inspires him to do this work. So yesterday I came to Govardhana and, after wandering around the town a bit, headed down the parikrama marga in search of Vamsivat Asrama.

Asking for directions every few feet, I finally found the asrama. There is a new Gaudiya Matha being built by a Parvat Maharaja on the parikrama marga itself. Just before it is a side road, newly paved with interlocking brick that connects with the Sonkh Road further south, going through a small farmer community. Vamsivat Asrama stands out here, a three-storey building in the middle of a field.

When I was being “vetted” at the entrance, I showed the Hindustan article to the young gatekeeper, along with my card. I was later rather surprised to find that no one in the asrama had seen the article or was even aware of it. Rather unlike most people who are engaged in activities of this sort, there seems to be little or no desire to exact some return on the good deed “investment” through publicity and enhanced public reputation.

Acarya Jugal Kishore Dasji was younger than I first expected. Perhaps it is because I myself am getting old! Now 47, he came to Vrindavana as a young boy to stay in his guru Haricharan Dasji’s ashram (Nimbarki) near Vamsi Vat, Kishore Kutir.

He took training in Bhagavata from Atul Krsna Goswami (Jnana Gudri) of the Radha Raman Goswamis, and eventually started his own career as a Bhagavata speaker. Somehow, this career took a different turn from that which most Bhagavata speakers from Vrindavana seem to aspire to–getting on Aastha TV and holding huge Bhagavata saptahas in Delhi and Mumbai, or on cruise ships to Dubai, traveling to foreign lands and having government ministers trekking to your asrama or temple to show their reverence. Instead, he started to go and give programs in villages and small towns to audiences of farmers and country folk.

Even now, says Jagdish Goswami, his principal assistant in the plantation project, Jugal Kishoreji will not accept any invitation from a wealthy donor unless the patron first sponsors at least three village programs. This has led to some interesting results as we shall see.

About twelve years ago, Jugal Kishore Dasji got the “call” to come and serve Govardhan. The opportunity came to build an asrama on a plot of land off the parikrama marga. Govardhana parikrama became a feature of the asrama‘s life, and even now there is a prominent sign that says, “You came this far, now go and do parikrama of Giriraj.” And the various rules and regulations for the parikrama are written on the outside wall. “First of all, bow down to the holy mountain, either with your full body or on five limbs. Do not insult the sacred dust of Vraja by shaking it from your body.”

But it wasn’t long before, in his words, “we saw the situation of the parikrama–empty stretches of barren land without any shade, gokharu thorns strewing the path and making it impossible to walk barefoot. We thought that this was not the ideal atmosphere in which to do this holy parikrama and our hearts went out to the pilgrims making the walk. If the government does not take responsibility, then someone else has to step forward to realize the dream.”

In 2006, he began by planting 1500 trees from the Talhati towards Anyaur. He arranged for a drip irrigation system with sweet water which he had piped in from his asrama.

Gradually the march westward continued and reached Anyaur. The sector from Anyaur to Puchari is already served by the district’s Udyana Vibhaga (Parks Department), but Jugal Kishore took on responsibility for greening the sector between Puchari and Jatipura and then from there to Govardhana.

In the beginning, he begged saplings from devotees in Agra, Dehradun, and other places where he gave Bhagavata saptahas. But now he has his own nurseries in Puchari and elsewhere. In order to get sufficient water for irrigation, he pipes in sweet water from five kilometers away and even the Parks Department is making use of this facility.

Another feature of the Vamsivat Asrama program is the govar gas plant and vermicompost tanks. The asrama has a small goshala that provides sufficient govar for all of its cooking needs and also enough fertilizer to nourish the young saplings.

“Altogether,” says Jagdish Goswami, “the asrama employs about 100 gardeners and other workers to keep the project going.”
Now, five years later, the results of the effort can be seen, thousands of young neem, banyan, kadamba, rose apple (jamun), and mulberry (shahtut) trees, as well as varieties of flower bushes and vines, fill the entire parikrama area from Govardhana to Puchari and back.

In all of this, Jugal Kishoreji says that he has taken no government aid. And the government officers, who are quite happy to see him taking this responsibility, are standing back and letting him follow his inspiration without interference. Seeing the success of his efforts, others are being inspired to come forward. Now the district Forestry Department is working with the Siddha Siddhanta Yoga Academy to plant trees in the Govardhana-Radha Kunda segment of the parikrama marga using the same strategies that Jugal Kishore has implemented. Except it seems that Yogi Shailendra Sharma has decided to concentrate on rat ki rani and kadamba.

The slight and unassuming Jagdish Goswami calls himself Jugal Kishore Dasji’s technical advisor. Jugal Kishore calls him his right-hand man and is not slow to praise him.

In 2009, Jagdish, who lives in Radha Kunda, observed that the government was planning to widen the parikrama marga on the Radha Kunda side even further, opening it up to more vehicle traffic and eradicating the soft shoulder areas of the walk that are so necessary to pilgrims making the walk. As a result of the protests he spearheaded, the more than Rs 50 crore plan was eventually scrapped by the government.

But, interestingly enough, all these accomplishments already seemed to be things of the past for the two men. Jugal Kishore Dasji was much more excited about something else, an unusual and inspired annual go-seva program that is conducted during Kartika month. [Read about the wonderful go-seva program, here.] 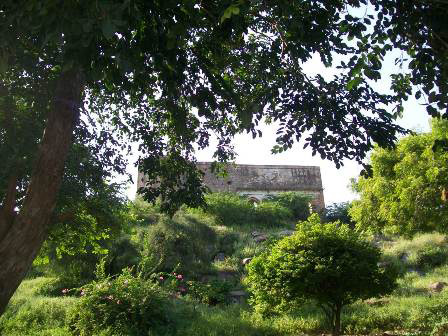