The Fifth Jewel of Gaudiya Kanthahara, entitled Nityananda-tattva, in honor of the observance of Sri Nityananda Trayodasi, the Appearance day of Lord Nityananda, February 16th. 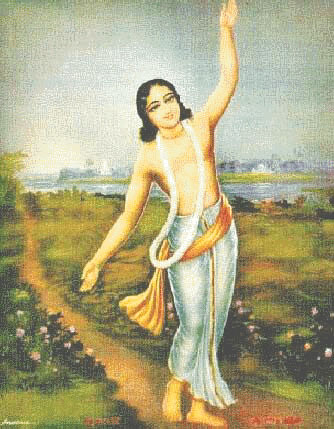 Nityananda Prabhu and Advaitacarya are the two expansions of Lord Caitanya Mahaprabhu who assist His transcendental pastimes. (Cc. Adi 5.146)

I surrender unto the lotus feet of Sri Nityananda Rama, who is known as Sankarsana in the midst of the catur-vyuha. He has full opulences and resides in Vaikunthaloka far beyond the material creation. (Cc. Adi 1.8)

I offer my full obeisances unto the feet of Sri Nityananda Rama, whose partial representation called Karanodakasayi Visnu, lying on the Karana ocean, is the original Purusa, the master of the illusory energy and the shelter of all the universes. (Cc. Adi 1.9)

I offer my full obeisances unto the feet of Sri Nityananda Rama, a partial part of whom is Garbhodaksayi Visnu. From the navel of Garbhodaksayi Visnu sprouts the lotus stem that is the birthplace of Brahma, the engineer of the Universe. The stem of that lotus is the resting place of the multitude of planets. (Cc. Adi 1.10)

I offer my full obeisances unto the feet of Sri Nityananda Rama, whose secondary part is the Visnu lying in the ocean of milk. That Ksirodakasayi Visnu is the Supersoul of all living entities and the maintainer of all the universe. Sesa Naga is His further sub-part. (Cc. Adi 1.11)

Baladeva is the Original Sankarsana

Lord Balarama is the original Sankarsana. He assumes five other forms to serve Lord Krsna. He helps in the pastimes of Lord Krsna, and He does the work of creation in four other forms. (Cc. Adi 5.8,9)

Balarama and Nityananda are non Different

For two purposes to spread the cult of bhakti and to defeat and sub- due the atheists Lord Nityananda, the most dedicated devotee of the Lord, moved throughout the country. (Cc. Antya 3.149)

The Glories of Nityananda Prabhu

[All glories to Nityananda Prabhu!] Maddened by ecstatic love of Godhead, he overwhelmed the universe with ecstasy. He slapped his hands together like a warrior who is about to attack, and upon seeing this, the wicked Kali fled in terror, fearing for his life. All souls were drowned in happiness because of the dancing of Sri Gauranga [and Nityananda]. Seeing such dancing, or even hearing of it, melts the hearts even of great atheists. (Gitavali, Nagara-kirtana, 8)

Nityananda is the Savior of the Most Fallen

I am more sinful than Jagai and Madhai and even lower than the worms in stool. Anyone who hears my name loses the results of his pious activities. Whoever utters my name becomes sinful. Who in this world but Nityananda could show His mercy to such an abominable person as me? Because He is intoxicated by ecstatic love and is an incarnation of mercy, He does not dis- tinguish between the good and the bad. He delivers all those who fall down before Him. Therefore He has delivered such a sinful and fallen person as me. (Cc. Adi 5.205-209)

One who would cross over the ocean of material existence and swim in the bhakti ocean should worship the lotus feet of Nityananda. (Cb. Adi 1.77)

Nityananda is the Foremost Preacher

These two brothers (Gaura and Nitai) are like one body; they are iden- tical manifestations. If you do not believe in Lord Nityananda, you will down. If you have faith in one, but disrespect the other, your logic is like the logic of accepting half a hen. (Cc. Adi 5.175,176)

Faith in Gaura Without Nitai, or Nitai Without Gaura,
is Flickering Faith and in Opposition to Pure Devotional Service

It would be better to be an atheist by slighting both brothers than a hypocrite by believing in one and slighting the other. (Cc. Adi 5.177)