In the Western world the swastika is synonymous with fascism, but it goes back thousands of years and has been used as a symbol of good fortune in almost every culture in the world. As more evidence emerges of its long pre-Nazi history in Europe, can this ancient sign ever shake off its evil associations?

In the ancient Indian language of Sanskrit, swastika means “well-being”. The symbol has been used by Hindus, Buddhists and Jains for millennia and is commonly assumed to be an Indian sign.

Early Western travellers to Asia were inspired by its positive and ancient associations and started using it back home. By the beginning of the 20th Century there was a huge fad for the swastika as a benign good luck symbol.

In his book The Swastika: Symbol Beyond Redemption? US graphic design writer Steven Heller shows how it was enthusiastically adopted in the West as an architectural motif, on advertising and product design.

“Coca-Cola used it. Carlsberg used it on their beer bottles. The Boy Scouts adopted it and the Girls’ Club of America called their magazine Swastika. They would even send out swastika badges to their young readers as a prize for selling copies of the magazine,” he says.

It was used by American military units during World War One and it could be seen on RAF planes as late as 1939. Most of these benign uses came to a halt in the 1930s as the Nazis rose to power in Germany.

The Nazi use of the swastika stems from the work of 19th Century German scholars translating old Indian texts, who noticed similarities between their own language and Sanskrit. They concluded that Indians and Germans must have had a shared ancestry and imagined a race of white god-like warriors they called Aryans.

This idea was seized upon by anti-Semitic nationalist groups who appropriated the swastika as an Aryan symbol to boost a sense of ancient lineage for the Germanic people.

We will always remember what the swastika was like in our life – a symbol of pure evil
Freddie Knoller, Holocaust survivor

The black straight-armed hakenkreuz (hooked cross) on the distinctive white circle and red background of the Nazi flag would become the most hated symbol of the 20th Century, inextricably linked to the atrocities committed under the Third Reich.

“For the Jewish people the swastika is a symbol of fear, of suppression, and of extermination. It’s a symbol that we will never ever be able to change,” says 93-year-old Holocaust survivor Freddie Knoller. “If they put the swastika on gravestones or synagogues, it puts a fear into us. Surely it shouldn’t happen again.”

The swastika was banned in Germany at the end of the war and Germany tried unsuccessfully to introduce an EU-wide ban in 2007.

The irony is that the swastika is more European in origin than most people realise. Archaeological finds have long demonstrated that the swastika is a very old symbol, but ancient examples are by no means limited to India. It was used by the Ancient Greeks, Celts, and Anglo-Saxons and some of the oldest examples have been found in Eastern Europe, from the Baltic to the Balkans .

If you want to see just how deeply rooted the swastika pattern is in Europe, a good place to start is Kiev where the National Museum of the History of Ukraine has an impressive range of exhibits. 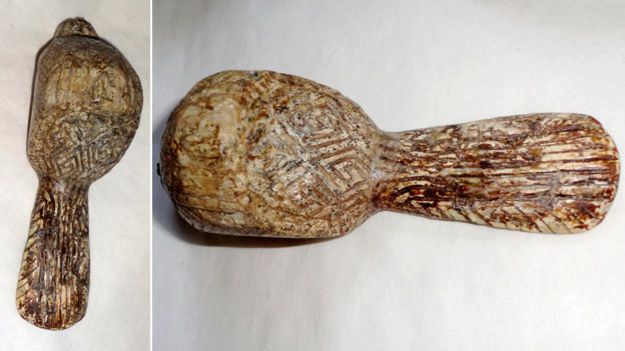 Among the museum’s most highly prized treasures is a small ivory figurine of a female bird. Made from the tusk of a mammoth, it was found in 1908 at the Palaeolithic settlement of Mezin near the Russian border.
Find out more

On the torso of the bird is engraved an intricate meander pattern of joined up swastikas. It’s the oldest identified swastika pattern in the world and has been radio carbon-dated to an astonishing 15,000 years ago. The bird was found with a number of phallic objects which supports the idea that the swastika pattern was used as a fertility symbol.

In 1965 a palaeontologist called Valentina Bibikova discovered that the swastika meander pattern on the bird is very similar to the naturally occurring pattern visible on a cross-section of ivory. Could it be that the Palaeolithic makers of the figurine were simply reflecting what they saw in nature – the huge mammoth they associated with well-being and fertility?

Single swastikas began to appear in the Neolithic Vinca culture across south-eastern Europe around 7,000 years ago. But it’s in the Bronze Age that they became more widespread across the whole of Europe. In the Museum’s collection there are clay pots with single swastikas encircling their upper half which date back to around 4,000 years ago. When the Nazis occupied Kiev in World War Two they were so convinced that these pots were evidence of their own Aryan ancestors that they took them back to Germany. (They were returned after the war.)

In the Museum’s Grecian collection, the swastika is visible as the architectural ornament which has come to be known as the Greek key pattern, widely used on tiles and textiles to this day.

The Ancient Greeks also used single swastika motifs to decorate their pots and vases. One fragment in the collection from around 7th Century BCE shows a swastika with limbs like unfurling tendrils painted under the belly of a goat.

Perhaps the most surprising exhibit in the museum is of fragile textile fragments that have survived from the 12th Century AD. They are believed to belong to the dress collar of a Slav princess, embroidered with gold crosses and swastikas to ward off evil.

The swastika remained a popular embroidery motif in Eastern Europe and Russia right up to World War Two. A Russian author called Pavel Kutenkov has identified nearly 200 variations across the region. But the hakenkreuz remains a highly charged symbol. In 1941 Kiev was the site of one of the worst Nazi mass murders of the Holocaust when nearly 34,000 Jews were rounded up and killed at the ravine of Babi Yar.
In Western Europe the use of indigenous ancient swastikas petered out long before the modern era but examples can be found in many places such as the famous Bronze Age Swastika Stone on Ilkley Moor in Yorkshire.

Some people think this long history can help revive the symbol in Europe as something positive. Peter Madsen, owner of an upmarket tattoo parlour in Copenhagen says the swastika is an element of Norse mythology that holds a strong appeal to many Scandinavians. He is one of the founders of last year’s Learn to Love the Swastika Day on 13 November, when tattoo artists around the world offered free swastikas, to raise awareness of the symbol’s long multicultural past.

“The swastika is a symbol of love and Hitler abused it. We’re not trying to reclaim the hakenkreuz. That would be impossible. Nor is it something we want people to forget,” he says.

“We just want people to know that the swastika comes in many other forms, none of which have ever been used for anything bad. We are also trying to show the right-wing fascists that it’s wrong to use this symbol. If we can educate the public about the true meanings of the swastika, maybe we can take it away from the fascists.”

But for those like Freddie Knoller who have experienced the horrors of fascism, the prospect of learning to love the swastika is not so easy.

“For the people who went through the Holocaust, we will always remember what the swastika was like in our life – a symbol of pure evil,” he says.

“We didn’t know how the symbol dates back so many thousands of years ago. But I think it’s interesting for people to learn that the swastika was not always the symbol of fascism.”