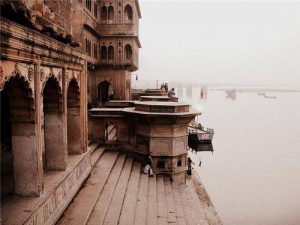 The Vrindavan riverfront has been made world famous for their beauty. They had been the witness of the beautiful past times of Radha and Krishna. But now these ghats, which had been the symbol of devotion, history and culture, are struggling for existence because of negligence by the city administration.

The structure of Keshi Ghat is cracking in many places. Stones from the steps are eroding from their original place. The beautiful arches of the ghat are also eroding and falling apart. The balcony to have a beautiful over view is also damaged, and the turrets are also cracked.

Vrindavan once had around 40 ghats, most of which are vanished now. Yamujna has also maintained distance from those ghats who are still existing. Keshi ghat is the most prominent ghat in Vrindavan today but the negligence from the government has made its condition pathetic.

It is said that Lord Krishna killed the horse-shaped Keshi demon at this very spot. That’s why it was named as Keshi Ghat (and not “K.C. Ghat” as is becoming more and more frequently seen!). Lord Varaha himself praised Keshi Ghat in the Varaha Purans stating that the place where Keshi was killed is so sacred place as to kill all the sins of one who bathes there.

Mr. Lakshmikant Tiwari, secretary at Braja Cultural Research Institute, told our correspondent that the Yamuna ghats have become the symbol by which both the Yamuna and Vrindavan are universally recognized. Keshi Ghat was constructed by Lakshmi, Queen of Bharatpur and wife of King Surajmal, in the year 1760.

At that time, the Yamuna used to flow very near to Keshi Ghat and always came right up to the steps. Indeed this was the case up until quite recently. But in the past few years, the water level of Yamuna has been dropping steadily because of pollution and the greenhouse effect.

In combination with the build-up of sediment near the pillars that were built for the half-circle bridge, this weakened flow of the river has resulted in its path flowing far from Keshi ghat.

An even worse desecration of the ghat is that the large sewers that flow into the river from Jugal Ghat and Bhramar Ghat are the only water that flows by Keshi Ghat, to come to a dismal halt a bare hundred meters or so after the ghat in what is now the old riverbed. And with this pool of sewage water sitting in front of the ghats, the flowers and dhonas that sit and rot right in front of the ghat make for a truly dismal sight.