India is all set to give hot yoga a cold shoulder.

In order to stop self-styled yoga gurus from claiming copyright to ancient `asanas', like Bikram Choudhury's Hot Yoga — a set of 26 sequences practised in a heated room — India has completed documenting 1,300 'asanas' which will soon be uploaded on the country's Traditional Knowledge Digital Library (TKDL), making them public knowledge.

Around 250 of these `asanas' have also been made into video clips with an expert performing them.

According to the Council of Scientific and Industrial Research ( CSIR) and Union health ministry's department of Ayush, "once the database is up online, patent offices across the world will have a reference point to check on everytime a yoga guru claims patent on a particluar `asana'."

CSIR's Dr V P Gupta, who created TKDL, told TOI, "All the 26 sequences which are part of Hot Yoga have been mentioned in Indian yoga books written thousands of years ago."

He added, "However, we will not legally challenge Choudhury. By putting the information in the public domain, TKDL will be a one-stop reference point for patent offices across the world. Every time, somebody applies for a patent on yoga, the office can check which ancient Indian book first mentioned it and cancel the application."

Nine well known yoga institutions in India have helped with the documentation. "The data will be up online in the next two months. In the first phase, we have videographed 250 'asanas' — the most popular ones. Chances of misappropriation with them are higher. So if somebody wants to teach yoga, he does not have to fight copyright issues. He can just refer to the TKDL. At present, anybody teaching Hot Yoga's 26 postures has to pay Choudhury franchisee fee because he holds copyright on them," Dr Gupta added.

TKDL will have photos and explanation of the postures. Dr Gupta said, "A voice-over will also point out which text mentions the posture. The information will be available in several international languages. We have screened through several ancient books like Srimad Bhagwat Gita, Vyas Bhashya, Yogasava Vijana, Hatha Praditika, Gheranda Samhita, Shiva Samhita, Yoga Sutras of Patanjali and Sandra Satkarma to exactly document all known `asanas' and yoga references."

Till now, it is estimated that the US patent office alone has issued over 200 yoga-related copyrights. Experts say yoga has become a $225 billion market in the West. Americans supposedly spend about $3 billion a year on yoga classes.

The TKDL, which has 30 million pages of information, has been created to prevent those living abroad from claiming patent for existing knowledge. 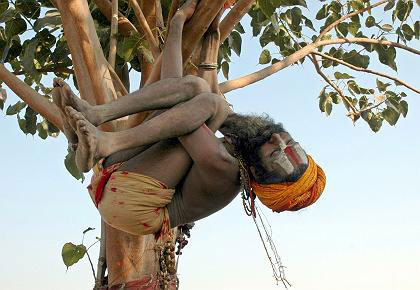