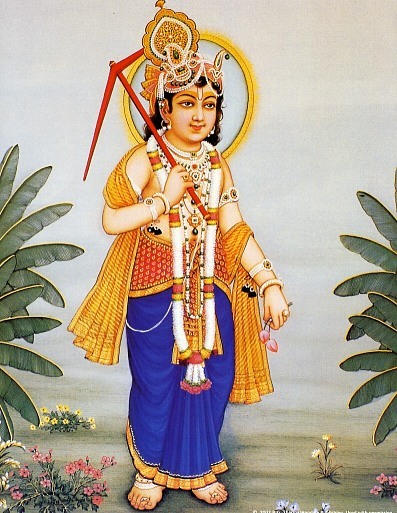 by Swami B. V. Tripurari

Baladeva bears the plow, which symbolizes his agricultural leaning stemming from his mother’s side, who despite her royal marriage, for all intents and purposes lived as a vaisya throughout Rama’s formative years. It also symbolizes the importance of the guru’s need to till the field of the heart of his or her student before planting the seed of bhakti therein. This preparation is not any kind of puruscarya, or purification process, as much as it is the awakening of faith. The puruscarya for mantra diksa of the Gopala mantra can amount to nothing more than the guru’s grace. And no puruscarya is required for chanting Krishna nama, but sri guru will give us his or her blessing to do so if the requisite faith is awakened. To give this blessing where faith has not arisen is an offense to the divine name. Balarama’s other self in Gaura lila, Sri Nityananda Prabhu, gave the holy name liberally to those who paid the price of their faith alone. So we follow Nityananda Rama in this and make adjustments as needed in consideration of time and circumstance. Rama’s lead has also been followed by Sri Rupa Goswami, who explains that it is faith that grants one eligibility to tread the path of bhakti. Thus sri guru follows Baladeva, the original guru—Krishna in the form of his best servitor.

Sri Balarama also manifested his plow in Vraja during his yamunakarsana lila (dragging the Yamuna) at the time that he returned from Dvaraka to deliver a message to the Vrajavasis. He is also referred to as “he who bears the plow” (Haladhara) in the Vraja lila involving the slaying of Pralambasura. At that time, in spite of using this name to address Balarama—a name that reminds us of his power—Sukadeva depicts him in very human terms, momentarily frightened as Rama was by Pralamba’s astonishing transformation from a cowherd into an asura, tvisadbhutam haladhara isad atrasat. Rama was, that is, completely absorbed in his identity as a gopa, and Pralamba was in the guise of a cowherd. Suddenly Pralamba assumed his actual form, and it was Krishna who revived Rama’s sense of his Godhood, empowering him to deal effectively with the asura. Rama thus remembered how Krishna had killed the woman Putana and the calf Vatsasura, and thereby he came to his senses regarding Pralamba, who appeared as one of Krishna’s friends. Krishna’s remembrance empowered him, and despite his Godly prowess, Balarama leans eternally on the shoulder of his younger brother, Ramanuja, and derives his strength in life from him, his friend and master, for whom in lila he also assumes the role of Krishna’s guru with regard to decorum. This is Haladhara, the maryada purusa of Gopala Krishna.

Krsnadasa Kaviraja Goswami also mentions Rama with reference to his bearing the plow when he informs us that Nityananda Prabhu is directly Balarama, nityananda gosani saksat haladhara. And when Mahaprabhu accepted the ecstasy of Balarama he also assumed the form of Haladhara.

But for the most part Baladeva does not carry his plow in Vraja, but rather a buffalo horn. Every morning he blows this horn signaling the time for the young cowherds to assemble and awaken Kanai Krishna. Zillions of cowherds stampede to the courtyard of Nanda Baba at the sound of Rama’s horn. While Krishna sends his devotees into a trance with sound of his flute, Rama awakens those in vatsalya, sakhya, and dasya rasas to their nitya seva. Always in the forefront of seva, he is the root of the serving ego in all souls and the seva that underlies the entire lila, bhakta abhiman mula balarama. With his buffalo horn, he leads the world of divine service and with his plow he prepares the field of our heart where the seed of that seva is first planted.