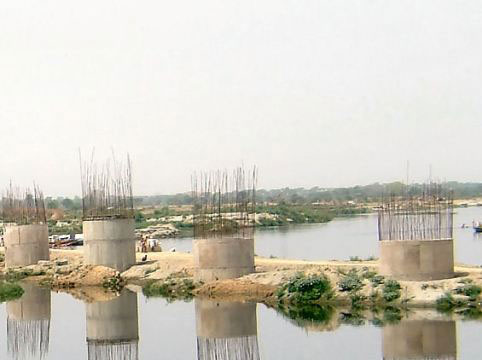 A Full Range of Considerations Regarding the Possibility of a 25 Concrete Pillar Flyover in Front of the Historic and Protected Landmark Jugal Kishore Mandir at Keshi Ghat, Vrindavan.

The Positives, with counter considerations:

The Flyover was the result of arbitrary planning unsupported by preliminary studies on viability, alternatives or environmental impact. No model was ever made. No plan was made by independent architects.

Pillars that were already constructed for the flyover tilted or collapsed in the first flood of 2010, indicating that planning and workmanship are poor and, like many structures, will not withstand several monsoon seasons and their accompanying floods.

The Flyover offends aesthetic feelings of Vrindavan’s heritage art, which is valued by devotees, academics, conservationists of built heritage and historians everywhere.

The Flyover helped awaken a public consciousness that civil action must be taken to protect Vrindavan. The Braj Vrindavan Heritage Alliance (BVHA), a public forum open to all, was formed to make everyone aware of the facts surrounding the flyover so they may reach an informed opinion and hopefully persuading citizens in favor of the bridge to change their stance to protect Vrindavan. BVHA (online bvhalliance.org) is also determined to rally concerned citizens together as one to resolve many other problems Vrindavan is facing.

Please write or call vrindavantoday.com editor Jagadananda or call Devendra Chaitanya Maharaj at 91 9410084200 to be invited to BVHA meetings, to participate in BVHA action committees, or to submit a commentary for publication sharing your views on problems and prospects regarding Vrindavan’s future. With a straw between my teeth I beg you all: Let us serve Vrindavan together.

Eliminate sewage flows into the Yamuna and garbage littering throughout town.

All with the help and mercy of Srimati Radharani.