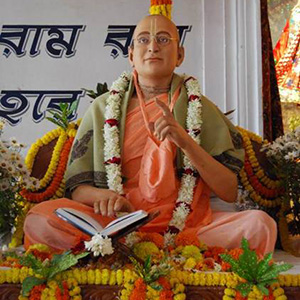 Srila Bhaktivinoda Thakura gave his son the Harinama Maha-mantra and Nrsimha mantra at five years of age. At seven, he received the Kurmadeva mantra and began worshiping a self-manifested deity of Kurmadeva. As a child, Bimala Prasada inadvertently ate a mango which was not yet offered to Lord Krishna. When asked about this by his father, Bimala Prasada was so upset over this offense to Lord Krishna that he took a vow to never eat another mango throughout his life. He also kept a life-long vow of celibacy. He took this vow when he formed a club at high school for those who wanted to avoid family entanglement. He excelled in all subjects at school, but spent most of his time reading his father’s books on Bhakti. He entered the Sanskrit University in 1892 and received the honorific title of “Siddhanta Sarasvati” in recognition of his vast knowledge of astrology and Bhakti. He then left university as he understood that if he continued on this path, he would become entangled into material life. He then spent all of his time serving his father who trained him in editing and publishing.

In 1900, while staying with his father in Godrumadvipa island of Sri Navadvipa-Mayapur Dhama, he took initiation from Srila Gaura-Kisora Dasa Babaji and received the name Sri Varsabhanavi-Devi [meaning the servant of the daughter of King Vrsabhanu, Srimati Radharani.] Five years later, he took a vow to chant one billion (ten crores) Holy Names of Lord to prepare himself for Krishna consciousness preaching. It took him 10 years to fulfil his vow, during which time he lived in a small bamboo hut chanting Hare Krishna Maha-mantra,

in front of his deity, Gauranga Mahaprabhu which is in the Rudradvipa island of Navadvipa Dhama. Then, in 1918, on Gaura-Purnima day, he accepted sannyasa order of life at Candrasekhara Bhavan and took the name Bhaktisiddhanta Sarasvati. He then began to preach Krishna Consciousness all over India, establishing Lord Caitanya’s mission with such vigour no one had seen before. He established sixty-four mathas (one for each of the sixty-four limbs of Bhakti), initiated over 60,000 disciples, and re-established Vraja-mandala and Navadvipa-mandala Parikramas. He also established printing press in Mayapur, Delhi, Chennai and other major cities. Publishing and distributing magazines and books was the major thrust of his preaching.

On 31st December 1936, Bhaktisiddhanta Sarasvati Thakura left his body in Kolkata surrounded by his disciples singing bhajans. His life-size murti is worshiped at Sri Caitanya Math in Mayapur.