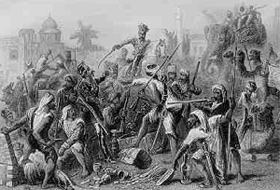 Quoting from The Cambridge History of India on Aurangzeb's campaign of temple destruction:

"Besides numberless shrines throughout the empire, all the most famous Hindu places of worship now suffered destruction: the temples of Somnath at Patan, Vishvanath at Benares and Keshav Dev at Muttra [Mathura]. Even the loyal state of Jaipur did not escape, sixty-six temples being demolished at Amber. During the Rajput war, in Udaipur and Chitor alone in two months 239 temples suffered ruin by his order.

The work of destruction was often accompanied by wanton desecration, such as the slaughtering of cows in the sanctuary and causing the idols to be trodden down in public squares." [1]

In 1679, Aurangzeb reinstated a crushing jizya tax on the Hindu infidels – the 'unbelievers' – knowing that those who could not pay would be forced to convert to Islam, thereby spreading the faith far and wide. That, or face death. Hindu clerks and accountants were replaced by Muslims, as were all revenue collectors. A few years prior to this, in 1668, Hindu religious fairs were decreed forbidden throughout the empire. Only the Rajputs were allowed to ride in palanquins, on elephants or good horses, or to carry arms.

"Forcible opposition to [Aurangzeb's] temple destruction was offered only in Rajputana, Malwa, Bundelkhnand and Khandesh, which were remote from the center of the imperial authority, and even there only when the emperor was not present. But we read of reprisals in the second half of the reign by certain Rajput and Maratha chiefs, who demolished converted mosques in retaliation or stopped the chanting of the call to prayer in their locality. In some places, the Muslim tax collectors were expelled after having their beards plucked out."

As has been the case with all the Mughal emperors covered in this series, from Babur through Aurangzeb, there are many versions of history to be found that slant the story in favor of the Muslims. While that could be done more easily with emperors like Akbar, who was renowned for supporting Vedic arts and culture, it is less easily done with Aurangzeb. Even the Islamic apologist have to admit that his legacy of destruction stands for the record, although of course, they paint it as 'militaristic prowess' rather than the depraved viciousness that it actually was. 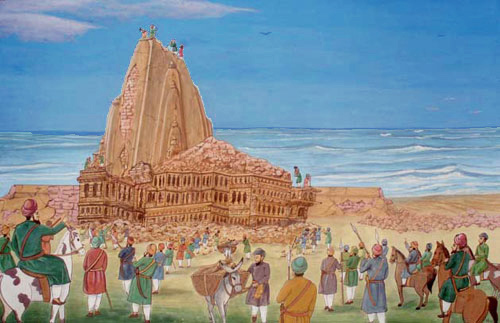 There are many examples of written records, in various historical and biographic literatures, which document the details of Aurangzeb's destruction of temples. Here is a selection [2] for the reader's consideration:

" …Hindu writers have been entirely excluded from holding public offices, and ALL THE WORSHIPPING PLACES OF THE INFIDELS AND GREAT TEMPLES of these infamous people HAVE BEEN THROWN DOWN AND DESTROYED in a manner which excites astonishment at the successful completion of so difficult a task. His Majesty personally teaches the sacred kalima to many infidels with success. … All mosques in the empire are repaired at public expense…"

This work, written in AD 1688 contains a history of the first ten years of Aurangzeb's reign.

" …In 1661 Aurangzeb in his zeal to uphold the law of Islam sent orders to his viceroy in Bihar, Daud Khan, to conquer Palamau. In the military operations that followed MANY TEMPLES WERE DESTROYED…"

" …Towards the end of the same year when Mir Jumla made a war on the Raja of Kuch Bihar, the MUGHALS DESTROYED MANY TEMPLES during the course of their operations. IDOLS WERE BROKEN AND SOME TEMPLES WERE CONVERTED INTO MOSQUES. …"

The author completed this history in 1710 at the behest of Inayatu''llah Khan Kashmiri, Aurangzeb's last secretary and favorite disciple in state policy and religiosity. The materials which Must'ad Khan used in this history of Aurangzeb's reign came mostly from the State archives.

"…The Lord Cherisher of the faith learnt that in the provinces of Tatta, Multan, and especially at Benaras, the Brahmin misbelievers used to teach their false books in their established schools, and that admirers and students both Hindu and Muslim, used to come from great distances to these misguided men in order to acquire this vile learning. His majesty, eager to establish Islam, issues orders to the governors of all the provinces TO DEMOLISH THE SCHOOLS AND TEMPLES OF THE INFIDELS and with utmost urgency put down the teaching and the public practice of the religion of these misbelievers…"

" …It was reported that, according to the Emperor's command, his officers HAD DEMOLISHED THE TEMPLE OF VISHWANATH AT KASHI. …"

" … During this month of Ramzan abounding in miracles, the Emperor as the promoter of justice and overthrower of mischief, as the knower of truth and destroyer of oppression, as the zephyr of the garden of victory and the reviver of the faith of the Prophet, ISSUED ORDERS FOR THE DEMOLITION OF THE TEMPLE SITUATED IN MATHURA< FAMOUS AS THE DEHRA OF KESHO RAI. In the short time by the great exertions of his officers the DESTRUCTION OF THIS STRONG FOUNDATION OF INFIDELITY WAS ACCOMPLISHED< AND ON ITS SITE A LOFTY MOSQUE WAS BUILT at the expenditure of a large sum…"

" …Praised be the August God of the faith of Islam, that in the auspicious reign of this DESTROYER OF INFIDELITY AND TURBULENCE, such a wonderful and seemingly impossible work was successfully accomplished. On seeing this instance of strength of the Emperor's faith and the grandeur of his devotion to God, the proud Rajas were stifled and in amazement they stood like images facing the wall. THE IDOLS, LARGE AND SMALL< SET WITH COSTLY JEWELS WHIC HAD BEEN SET UP IN THE TEMPLE WERE BROUGHT TO AGRA< AND BURIED UNDER THE STEPS OF THE MOSQUE OF BEGUM SAHIB, IN ORDER TO BE CONTINUALLY TRODDEN UPON. The name of Mathura was changed to Islamabad. …"

" … Darab Khan who had been sent with a strong force to punish the Rajputs of Khandela and TO DEMOLISH THE GREAT TEMPLE OF THE PLACE, attacked on March 8th/Safar 5th, and slew the three hundred and odd men who made a bold defence, not one of them escaping alive. THE TEMPLES OF KHANDELA AND SANULA AND ALL OTHER TEMPLES IN THE NEIGHBOURHOOD WERE DEMOLISHED …"

" … On 24th Rabi S. (Sunday, May 25th), Khan Jahan Bahadur came from Jodhpur, AFTER DEMOLISHING THE TEMPLES and bringing with himself some cart-loads of idols, and had audience of the Emperor, who higly praised him and ordered that the idols, which were mostly jewelled, golden, silver, bronze, copper, or stone, should be cast in the yard (jilaukhanah) of the Court AND UNDER THE STEPS OF THE JAMA MOSQUE, TO BE TRODDEN UPON…"

" … Ruhullah Khan and Ekkataz Khan WENT TO DEMOLISH THE GREAT TEMPLE in front of the Rana's palace, which was one of the rarest buildings of the age and the chief cause of the destruction of the life and property of the despised worshippers. Twenty 'machator' Rajputs who were sitting in the Temple vowed to give up their lives; first one of them came out to fight, killed some and was them himself slain, then came out another and so on, until every one of the twenty perished, after killing a large number of the imperialists including the trusted slave Ikhlas. The Temple was found empty. THE HEWERS BROKE THE IMAGES. …"

" …On Saturday, the 24th January, 1680 (2nd Muharram), the Emperor went to view lake Udaisagar, constructed by the Rana, AND ORDERED ALL THE THREE TEMPLES ON ITS BANKS TO BE DEMOLISHED. …"

" …On the 29th January/7th Muharram, Hasan Ali Khan brought to the Emperor twenty camel-loads of tents and other things captured from the Rana's Palace and REPORTED THAT ONE HUNDRED AND SEVENTY-TWO OTHER TEMPLES IN THE ENVIRONS OF UDAIPUR HAD BEEN DESTROYED. The Khan received the title of Bahadur Alamgirshahi…"

"… Abu Turab, who had been SENT TO DEMOLISH THE TEMPLES of AMBER, returned to the Court on Tuesday August 10th (Rajab 24th), and reported that HE HAD PULLED DOWN SIXTY-SIX TEMPLES. …"

" … Hamiduddin Khan Bahadur WHO HAD GONE TO DEMOLISH A TEMPLE AND BUILD A MOSQUE (IN ITS PLACE) in Bijapur, having excellently carried his orders, came to court and gained praise and the post of darogha of gusulkhanah, which brought him near the Emperor's person…"

• "…LARGE NUMBERS OF PLACES OF WORSHIP OF THE INFIDELS AND GREAT TEMPLES OF THESE WICKED PEOPLE HAVE BEEN THROWN DOWN AND DESOLATED. Men who can see only the outside of things are filled with wonder at the successful accomplishment of such a seemingly difficult task. AND ON THE SITES OF THE TEMPLES LOFTY MOSQUES HAVE BEEN BUILT…"

[1] A list of dates and authorities is given in my History of Aurangzeb, vol. III, chap. XXXIV, Appendix V. [2] Literary records compiled by Rajiv Varma.