A chapter from Dr. Sahadeva Dasa's book entitled as Made for Each Other.

In vedic society, the cow is not considered a money-making machine but a sacred animal, an entity who softens human passions, elevating humanity to the mode of goodness so that it can lead a peaceful and harmonious life.

The cow is considered very sacred in vedic tradition for very good reason. It's good qualities are those that we can emulate. 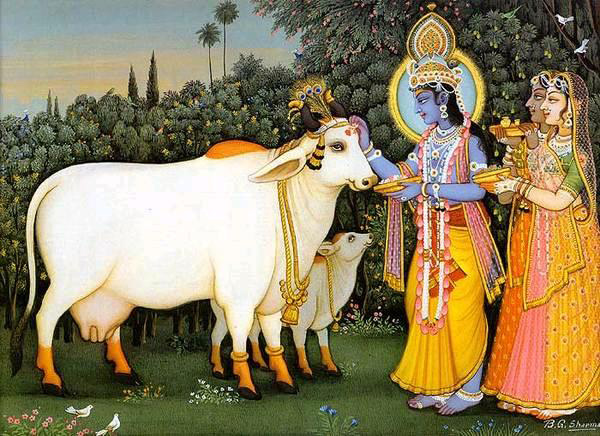 Serene by temperament, herbivorous by diet, the very appearance of a white cow evokes a sense of piety. Vedic authorities strictly forbid cow killing; for compulsive meat eaters, they advise substituting some less important animal instead. Because we drink the cow's milk, the Vedic literatures consider her one of human society's mothers. Cow protection is thus imperative, for cow's milk stimulates the growth of healthy brain tissues required for understanding the principles and executing the practices of bhakti-yoga, devotional service to God. On the other hand, meat contains poisons and cholesterol that simply dull the mind and debilitate the body.

Almost universally, cows are seen as an emblem of peace. Even the word “bucolic,” referring to a peaceful pastoral scene, comes from the Greek word boukolos, which means “cowherd.” Unlike dogs and cats, cows are generally not inclined to fight one another, even for food. They are sociable and fond of one another and affectionate to their caretakers. Because cows are naturally peaceful, cowherds tend to take on this quality.

Furthermore, one must have a peaceful demeanor for milking cows and training oxen. Cows and bulls are sensitive to human moods. Cows will not give milk if the milker acts upset. Oxen will not learn commands if the trainer is angry. The cowherd has to cultivate peacefulness to get the job done.

To deal effectively with cows and bulls, a keeper has to have patience and forbearance. These animals lead a life at their own pace and can not be hurried. A farmer has to check his nature, whatever that may be to suit the animals’ and adapt to their temperament. Otherwise cows will not be happy. Happy cows means happy farmers and crabby cows lead to broke farmers.

In traditional pastoral communities, crime and host of other social evils are almost nonexistent.
One important aspect of self-control is control of the tongue. When by caring for cows a person sees how friendly and loving they are, his compassionate nature may get aroused. Then he can easily give up eating meat, not wanting to kill the animals he loves and depends on.

Training oxen is another important aid to sense control. There’s a New England saying that you train the boy by having him train a team of oxen. There’s truth in that. In Sanskrit ‘go’ means “cow,” and it also means “senses.” A trainer can see that when the oxen (go) do whatever they feel like, they’re useless. Once they’re trained and controlled, they’re useful and happier. The trainer can see that the oxen are proud and happy to work with him when they can control their senses. The comparison with his own senses (go) is automatic. The trainer sees that when he trains and controls his own senses to serve God, he too will be happier and more productive.

In Vedic system, one is supposed to offer foods (vegetarian only!) to God or Krishna first before eating them. This spiritual practice of eating offered food promotes control of the tongue. When the cowherd offers Krishna milk products from Krishna’s own cows, and grains and vegetables from His own land, and then takes the remnants in the form of prasadam (mercy), the cowherd’s brain becomes spiritually purified, and the words he speaks become sober and happy in glorification of God or Krishna.

In a society that truly practices cow protection, the bull is fully used for growing food and transporting it. As a valuable member of society, the ox is carefully maintained and protected from slaughter.

Economically, using the ox as the means of transport rules out the pileups of wealth that go with trucking things around with coal, gasoline, and nuclear power. Each farmer can farm only so much land with oxen, much less even than with horses. So the use of oxen regulates the scale of production, which helps guarantee that land and wealth are fairly distributed. Economic inequality and social unrest is prevented. There are no 1000-acre agribusinesses. And no heaps of wealth to make it easy for people to become entangled in frivolous activities of sense gratification.

Because the work of caring for the cows and the land is satisfying, artificial sources of pleasure are not required. As spiritual life develops, austerity and simple living become a pleasure, not a burden. A cowherd farmer may not have time and may not feel the need for night clubs, bars, cinemas and casinos. Herding the cows and taking care of them day and night engages him or her fully and it is a very satisfying chore.

Cows can tolerate a wide range of physical conditions. They thrive in the cold Scandinavian countries, in the hot, dry African plains, in the wet tropical jungles of Latin America. But they cannot tolerate filth. They quickly become diseased if not kept clean. As the cowherd works to keep the cows clean, he or she practices living a clean way of life.

Probably no other animal is as tolerant as a cow. If by your daily care and affection you convince the cow or ox that you are its well-wisher, it won’t hold a grudge against you for reprimanding it. It won’t attack you. For example, once, by my foolish negligence, one of our milk cows got loose from her stall, and when I walked into the barn I found her eating from a grain cart. I knew she could die from overeating if she didn’t stop. So I yelled at her, but she didn’t stop. I hit her on the back with a stick, but she still kept eating. Finally, I had to hit her in the face, which I hated to do, especially since it was my fault she got loose. But she stopped eating grain and returned to her stall. In five minutes she was mooing softly for me to come and pet her. She wasn’t at all afraid of me, and she wasn’t angry at me. I knew a dog or cat or even a child would never have such tolerance.

Cows have very high threshold for pain tolerance. They do not reveal their ailments so easily. But a person they trust can find out about their health issues more easily than a stranger. When in pain or heading for slaughter, pigs squeal and thrash around but cows tolerate it very soberly. The cowherd can learn tolerance from the cows and oxen.

Milk production will drop because cows don’t want to drink that nasty-tasting water. You forgot about the six o’clock milking? You’ll be kicking yourself tomorrow when you have to take care of a cow suffering from mastitis. You’ll probably never forget again. Cow protection is a practical way of learning to be honest and conscientious.

Cultivation of spiritual knowledge starts with a healthy brain. For this, milk is essential. Prabhupada explains, “The body can be maintained by any kind of foodstuff, but cow’s milk is particularly essential for developing the finer tissues of the human brain so that one can understand the intricacies of transcendtal knowledge.” (Srimad-Bhagavatam 3.5.7)

Scientists support this view. They say that Vitamin B12 is essential to maintain healthy nerve cells. (The brain is made up of nerve cells.) A Vitamin-B12 deficiency can take years to manifest, but it is a deadly serious matter, as explained by nutrition expert Laurel Roberts. “The first signs of damage are a characteristic sore back, numbness and tingling in the feet, and diminshed vibration and position sense.

The only natural source of vitamin B12 in a vegetarian diet is milk. (Obtaining B12 from meat products creates new problems because of the adrenalin and toxins one ingests with the meat.) In a peaceful society, therefore, milk is essential to properly maintain brain cells needed for spiritual intelligence.

Prabhupada emphasizes this point again, “For such important brain tissues we require a sufficient quantity of milk and milk preparations. Ultimately, we need to protect the cow to derive the highest benefit from this important animal. The protection of cows, therefore, is not merely a religious sentiment but a means to secure the highest benefit for human society.” (Light of the Bhagavata)

Thus when the cowherd comes home and takes a cup of hot milk at the end of a day of hard work in the fields, he or she is making the brain fit to contemplate spiritual topics. And the peaceful fields and pastures provide the perfect environment to cultivate knowledge and wisdom.

No need to be a great scholar. No need to be a powerful warrior, or even a highly talented craftsman. If the cowherd faithfully carries out the duties of caring for the cows and bulls and producing food to offer to God, he or she will become spiritually satisfied.

“Milk is liquid religiosity,” says Srila Prabhupada. So what could be more religious than to produce milk and grains and offer them to God? Bhagavad-gita says that a person can understand God only by devotional service.(Bg. 18.55) And one can perform devotional service by doing one’s daily work as an offering to God (Bg. 18. 45,46). Besides that, just by seeing the cows every day one can easily remember Krishna and His cows in Goloka Vrindavan, in the spiritual sky. That remembrance is the highest religiousness.

Through philosophy and scripture alone a few intelligent people can be motivated to undertake spiritual life. For them to get started on the path back to Godhead may be easy. But most of us are not like that. For us God has very kindly sent the cow and the bull to coach us in developing qualities that will help us in God consciousness.

In today’s ‘me and mine’ civilization, people have become impersonal. Isolation and urban loneliness are emerging as major issues of the day. Modern man is utterly lonely amidst the swarming city crowds. Man is trying to explore moon but has no idea about the next door neighbor.

Pastoral life, surrounded by cows and bulls, on the other hand is different. There is bound to be intimate exchange and community feelings between humans and between animals and humans. Amidst these loving creatures, there is no chance of becoming lonely. Cows expect very personal dealings and want to be called by a name.

In fact a study by the university’s School of Agriculture, Food and Rural Development, involving 516 farmers across the UK, found that cows that are named and treated with a “more personal touch” can increase milk yields by up to 500 pints a year. The study, by Published in the journal Anthrozoos, found farmers who named their cows gained a higher yield than the 54% that did not give their cattle names. Dairy farmer Dennis Gibb, who co-owns Eachwick Red House Farm outside Newcastle with his brother Richard, said he believed treating every cow as an individual was “vitally important”.

Thus cow protection contains valuable lessons on how to be warm and personal.