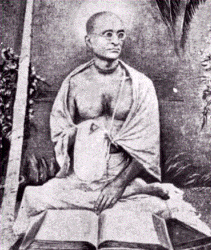 The name of Krishna on the lips of the supreme Lord (Sri Caitanya) had the power of making all persons, who heard it, realize the truth of whom they had been told by the scriptures. This was a most marvelous experience.

In this Iron Age it is only the name of Krishna appearing on lips of a bona fide sadhu who can lift the conditioned soul to the plane of the absolute. As a matter of fact even the scriptures also can only faintly describe the personality Godhead.

The mere study of the scriptures can convey no full knowledge of the absolute as substantive entity. The name Krishna has the power to put the person on the absolute plane and endow the words of the revealed scriptures with their living meaning.

On the plane of the absolute all entities serve Godhead in infinite variety of forms and run harmoniously into, instead of clashing against, one another.

Division of the person who once hears the name of Krishna undergoes this marvelous change. He can only then really believe in Godhead because he understands and sees whom he is to serve. He becomes in the substantive sense a bona fide theist or Vaisnava.