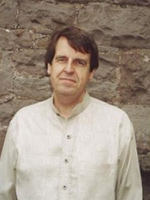 Mr Das, who lives in Brecon, said that Hinduism's focus on the symbiotic relationship between mankind and the cow could be taken on by all people as a way of reducing carbon emissions caused by intensive beef farming.

He was one of several religious representatives who attended the Faith in the Environment conference hosted by BBC Wales in November 2009.