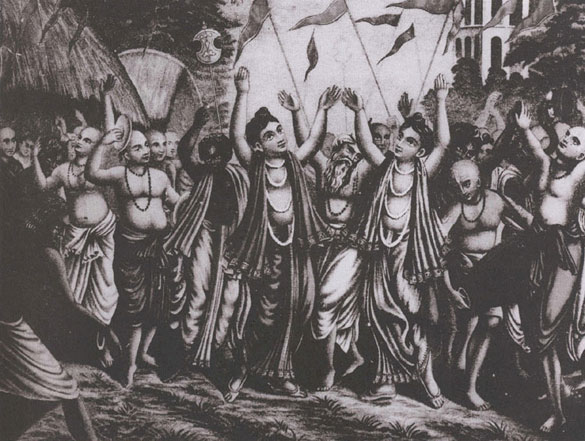 The Disappearance day of Sri Govinda Ghosh is observed on March 30th.

Govinda is counted amongst the branches of Chaitanya Mahaprabhu (Chaitanya Charitamrita 1.10.118). Eventually, he made his home in Agradvipa, Vasudeva in Tamluk, and Madhava Ghosh in Dain Hat. [Agradvipa and Dain Hat are villages lying between Nabadwip and Katwa, while Tamluk is in Mednipur.] Govinda Ghosh Thakur's house is not far from Agradvipa in Kashipura Vishnutala. Some are of the opinion that Vaishnavatala was his birthplace.

Govinda Ghosh participated in Mahaprabhu's lilas in Srivasa Angan, in the nagara-sankirtan to the Kazi's house, and in the house of Raghava Pandit. During the Rathayatra festival, he was the lead singer in the fourth kirtan group, accompanied by his two brothers, Junior Hari Das, Vishnu Das and Raghava Pandit. Vakresvara Pandit joined this group as the principal dancer.

On Mahaprabhu's direction, Govinda revealed the Gopinath deity from a black stone in Agradvipa. Mahaprabhu also instructed him to get married. The story goes that Govinda Ghosh's wife and son both died untimely. As he grew older, Govinda began to wonder who would perform the last rites for him, as it is considered important for one to have a son who can do the shraddha ceremony on his behalf. He had a dream in which Gopinath appeared to him and said, "Don't worry about this. I will perform the shraddha ceremony for you myself."

When Govinda Ghosh finally died, Gopinath offered the pinda on his behalf. Gopinath continues to perform this ceremony every year on the anniversary of Govinda Ghosh's departure from this world. This takes place on the krishna trayodashi of the month of Chaitra. Vasudeva Ghosh's disappearance day is on the second day of the waxing moon in the month of Karttik.

O Mukunda! My life! What did I suddenly hear today? If I say it I will die… the words do not want to come out of my mouth. Gauranga is really going to leave Nabadwip.

We didn't know this, but we saw Gora this morning; he was sitting with his head bowed in thought. Streams of tears flowed from his eyes and washed over his chest, and his moon-like face had lost its luster.

When we saw him like that, our own hearts fluttered and we could not ask him anything. For a moment I regained consciousness and humbly asked him the question and that is what he told me.

Becoming disturbed, I ran here to you right away without saying anything further to him. I have told you this and now do what you can. As far as we are concerned, I don't think that we have any hope of continuing to live.

When he heard this, Mukunda started to cry. He could no longer keep his calm as he looked at Gadadhara. Govinda Ghosh says, Let it not be, for if he leaves, I will die.

O people of Nabadwip, at whom are you staring?
Spread your arms to stop Gora, make him come back!
Who is there now who will clasp you to his chest?
Who will come and beg you to take love of Krishna?
A shaft has pierced my heart! A shaft has pierced my heart!
The image of my life has abandoned Nabadwip and gone.
No longer will we be able to go and sit with Gauranga;
no longer will we be able to enjoy kirtan the way we did.
All the devotees are crying; their hearts are bursting
and, like a stone, Govinda Ghosh does not go to join them.