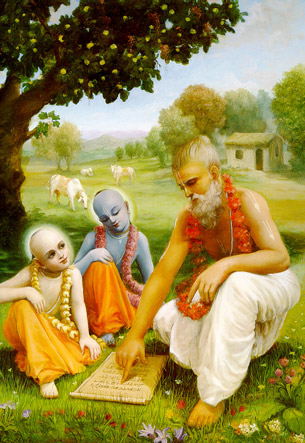 It is not empiric wisdom that is the object of quest of the devotee. Those who read the scriptures for gathering empiric wisdom will be pursuing the wild goose chase… The mutual admiration society of dupes does not escape, by the mere weight of their number, the misfortunes due to the deliberate pursuit of the wrong course in accordance with the suggestions of our lower selves… Thakura Bhaktivinoda is acknowledged by all his sincere followers as possessing the powers of the pure devotee of Godhead.

His words have to be received from the lips of a pure devotee. If his words are listened from the lips of a non-devotee they will certainly deceive. If his works are studied in the light of one's own worldly experience their meaning will refuse to disclose itself to such readers. His works belong to the class of the eternal revealed literature of the world and must be approached for their right understanding through their exposition by the pure devotee. If no help from the pure devotee is sought, the works of Thakura Bhaktivinoda will be grossly misunderstood by their readers. The attentive reader of those works will find that he is always directed to throw himself upon the mercy of the pure devotee if he is not to remain unwarrantably self-satisfied by the deluding results of his wrong method of study.

The writings of Thakura Bhaktivinoda are valuable because they demolish all empiric objections against accepting the only method of approaching the Absolute in the right way. They cannot and were never intended to give access to the Absolute without help from the pure devotee of Krishna. They direct the sincere enquirer of the truth, as all the revealed scriptures do, to the pure devotee of Krishna to learn about Him by submitting to listen with an open mind to the transcendental sound appearing on his lips. Before we open any of the books penned by Thakura Bhaktivinoda, we should do well to reflect a little on the attitude which serves as the indispensable prerequisite to approach its study. It is by neglecting to remember this fundamental principle that the empiric pedants find themselves so hopelessly puzzled in their vain endeavor to reconcile the statements of the different texts of the scriptures. The same difficulty is already in process of overtaking many of the so-called followers of Thakura Bhaktivinoda and for the same reason…

Those who want to understand the contents of the volumes penned by the piecemeal acquisitive method applicable to deluding knowledge available to the mind on the mundane plane, are bound to be self- deceived. Those who are sincere seekers of the truth are alone eligible to find Him, in and through the proper method of His quest.

In order to be put on the track of the Absolute, listening to the words of the pure devotee is absolutely necessary. The spoken word of the Absolute is the Absolute. It is only the Absolute Who can give Himself away to the constituents of His power. The Absolute appears to the listening ear of the conditioned soul in the form of the name on the lips of the sadhu. This is the key to the whole position. The words of Thakura Bhaktivinode direct the empiric pedant to discard his wrong method and inclination on the threshold of the real quest of the Absolute. If the pedant still chooses to carry his errors into the realm of the Absolute Truth he only marches by the deceptive by- path into the regions of darker ignorance by his arrogant study of the scriptures. The method offered by Thakura Bhaktivinoda is identical with the object of the quest. The method is not really grasped except by the grace of the pure devotee. The arguments, indeed, are these. But they can only corroborate, but can never be a substitute for, the word from the living source of the Truth who is no other than the pure devotee of Krishna, the concrete Personal Absolute.