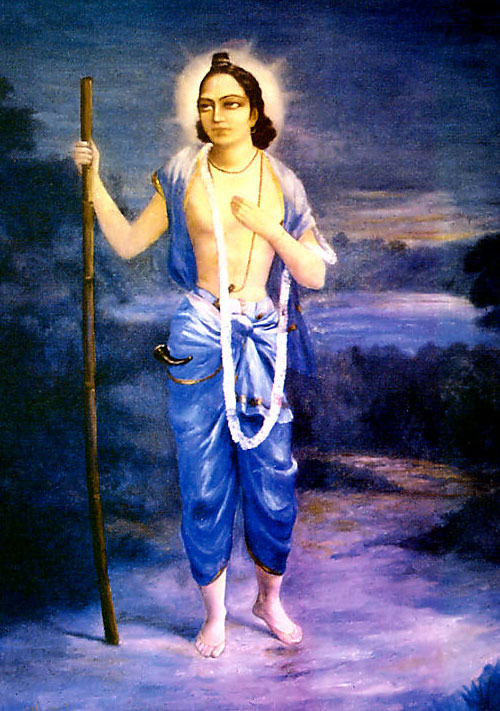 By Swami B.V. Tripurari, excerpted from his forthcoming book, Friends Forever: Sakhya-rati of Uttama-Bhakti, for the occasion of Nityanada Trayodasi.

The circle of Gaura dhama is populated by many siddhas playing the role of sadhakas—sadhana siddha bhumi. Narottama Thakura sings gaurangera sangi gane nitya siddha kore mani, “The associates of Gauranga are all eternally liberated.”(1) By far the most influential among them was Nityananda-rama, the Balarama of Gaura-lila. Sri Nityananda appeared in Eka Cakra and entered the circle of Gaura’s associates just after Sri Caitanya began his school of prema sankirtana upon returning from Gaya in December of 1508.

The Bengali poetry of Narottama dasa informs us that the treasure of Goloka is its prema and that this prema was exported to this world, packaged in nama sankirtana, golokera prema dhana harinama sankirtana.(2) The principal bearers of this gift are Sri Caitanya and Prabhu Nityananda, whom Narottama identifies with Krishna and Balarama, vrjendranandana yei saci suta hoilo sei balarama hoilo nitai.(3) This sankirtana is very special. It is sankirtana woven together with Vraja prema into a garland worn by Gaura and given to the world by Nitai-bhai, without whose touch is impossible to attain, heno nitai vine bhai radha krsna paite nai.(4) That which Gaura is all about Nitai knows very well. Sri Vrndavana das writes that the gopi-bhakti described in Srimad Bhagavatam was given to the world by Nitaicanda.(5) And although Nityananda-rama did not articulate it in Vedantic detail, he wasted no time in shedding light on Gaura and his gift, the result of which, among other things, was that others also paid attention to Gaura and eventually turned the waterfall of his ecstasy into an approachable lake of teachings grounded in the earth of Eastern revelation.

After arriving in Nadiya, it was Nitai who started the Gaudiya sampradaya along the Ganga delta. He did so with the help of twelve associates of his own—the dvadasa gopalas. While Gaura had begun his nocturnal school of Krishna sankirtana in the courtyard of Srivasa Thakura, upon his arrival, Nityananda-rama turned the focus from Krishna to Gaura—Gaura Krishna. Instead of repeating the teaching of Gaura to worship Krishna, teach about Krishna, and chant Krishna nama, Nitai boldly declared bhaja gauranaga kaha gauranaga laha gaurangera nam re, “Worship Gauranga, speak of Gauranga, chant Gauranga’s name,” assuring those who did so that he himself could be purchased by those who followed his advice, ye jana gauranga bhaje sei amara prana re, “Those who worship Gauranga are my life breath.” Again, to date there were no theological/philosophical texts that constituted a Gaudiya scriptural canon, all of which followed Nitai’s outspoken insight into, not only the divinity of Gaura, but the sense that he was Krishna himself in golden hue. The idea that Nitai could be purchased by the focus on Gaura he advocated was a compelling prospect, such was his own spirituality.

Dressed as a great avadhoot, large in stature, boundless was the depth of his gravity. Day and night he chanted Krishna-nama. He was Caitanya-dhama itself, incomparable within the worldly realms, bhur bhuvah sva. Roaring loudly in his own ananda, he appeared intoxicated, as if Balaramaavatara. His heart-warming countenance conquered millions of moons, the enchanting smile on his lips the life of the universe. His two hands reached his knees; his chest raised high; his pair of large lotus feet tender yet deft at dancing. He spoke to all with great compassion. On hearing the words from his lotus mouth, one’s karma was destroyed.(6)

Nitai arrived on the eve of Guru Purnima—July of 1509—but on the night before his arrival he appeared to Gaura in a dream in the dress of Balarama riding a vehicle marked by a flag bearing the insignia of a palm tree—the mark of Balarama’s chariot. With a loud voice he repeatedly called out for Nimai Pandita, and as morning broke Sriman Panditji informed his devotees that a great person had arrived in Nadiya. Then Gaura brought them to Nandana Acarya’s door where Nitai sat in waiting, more effulgent than millions of moons, smiling in contentment. Seeing his elongated lotus eyes, the lotus itself would wilt.

Here in Nadiya, the maryada purusa of Krishna’s cowherd life and lila exhibited a childlike disposition. And it was Gaura who repeatedly protected Nityananda-rama’s reputation, making sure that he was not misunderstood in the assembly of devotees. Nitai carried his heart in his hand extended to Gaura in spiritual madness such that his behavior often breached social norms, and on such occasions it was Gaura who taught his devotees to always show Nitai the highest regard, regardless of his unorthodox behavior. Above, Vrndavana dasa describes Nitai “dressed as an avadhoot.” The Sanskrit wordavadhoot, however, refers to one who fails to adorn his body, being practically unaware of it. Sridhara Swami defines the word avadhoot accordingly—asamskrta deha.(7) Inner spiritual absorption leading to forgetfulness of bodily necessities can result in uncommon behavior. On the occasion of Gaura’s first meeting with Nitai, in the ecstasy of sankirtana Gaura took Nitai on his lap in a reversal of their roles—Vishnu supporting Sesa—in order to assure the assembled devotees of Nitai’s spiritual standing.

When Nityananda-rama met Sri Caitanya he was thirty-five years old, while Sri Caitanya was only twenty-three and just beginning to manifest his sankirtana lila. Nitai appeared in the world a dozen years before Gaura and departed a decade after his departure. In January of 1510, less than one year after the two first met, Mahaprabhu accepted the renounced order and left Nadiya for Jagannatha Puri accompanied by Nitai. It was within this short period in Nadiya prior to their departure to Puri that Nityananda began to gather his band of twelve principal associates—dvadasa gopalas—who eventually widely initiated disciples along with him, thus giving the initial shape in Bengal to what would become the Gaudiya sampradaya.