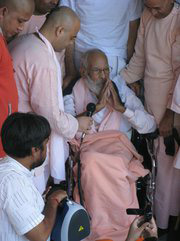 After deep concerns that Bhaktivedanta Narayan Maharaj would perhaps not make it through to Karttik Purnima, his physical condition has seen slow but steady progress in many areas.

Most of the some 1500 devotees who had come from all over the world to join the Braj parikrama during Karttik left somewhat confident that his health was improving, at least for the time being. Narayan Maharaj’s appetite has been improving and he has been capable of walking and moving about a little.

His cancerous tumor is still present, but his health care and support team is giving him medicines to help dissolve it. He has also been receiving Ayurvedic treatment. His doctor was happy to find some rare herbs growing in the vicinity of Narayan Maharaj’s Govardhan Math and added them to the treatment he had prescribed.

Now that his health has improved somewhat, Srila Narayan Maharaj left by plane for Jagannath Puri yesterday, in the hopes that the fresh and clean ocean air will bring further improvements. It is hoped that the imbalances causing him discomfort will be alleviated in the climate of Puri.