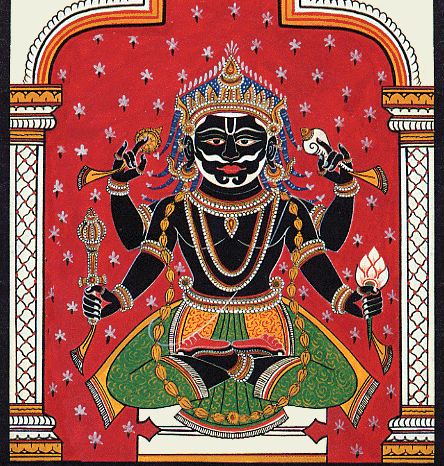 In honor of the auspicious appearance day of Bhagavan Nrsimhadev and the disappearance day of Hiranyakasipu we present two verses spoken by Prahlad Maharaja, wherein he chastises his father for thinking he has enemies:

“Give up your demonic nature. Make your mind equal to all beings. There are no enemies except the mind which is uncontrolled and deviant. Worship the unlimited Lord.” (Śrīmad Bhāgavatam 7.8.9)

Srila Visvanath Chakravarti Thakur comments: “Give up your demonic nature and make your mind think yourself and others to be equal. “How can I make my mind equal to enemies?’ There are no enemies, except for the mind which is uncontrolled. When you control the mind and see everyone equal to yourself, you will not see any enemies. That is being equal everywhere.”

“In former times there were many fools like you who did not conquer the six enemies that steal away the wealth of the body. These fools were very proud, thinking, ‘I have conquered all enemies in all the ten directions.’ But if a person is victorious over the six enemies and is equipoised toward all living entities, for him there are no enemies. Enemies are merely imagined by one in ignorance.” (Bhāg. 7.8.10)

His Divine Grace A. C. Bhaktivedanta Swami Prabhupada comments: “In this material world, everyone thinks that he has conquered his enemies, not understanding that his enemies are his uncontrolled mind and five senses (manaḥ ṣaṣṭhānīndriyāṇi prakṛti-sthāni karṣati [Bg. 15.7]). In this material world, everyone has become a servant of the senses. Originally everyone is a servant of Krishna, but in ignorance one forgets this, and thus one is engaged in the service of māyā through lusty desires, anger, greed, illusion, madness and jealousy. Everyone is actually dependent on the reactions of material laws, but still one thinks himself independent and thinks that he has conquered all directions. In conclusion, one who thinks that he has many enemies is an ignorant man, whereas one who is in Krishna consciousness knows that there are no enemies but those within oneself — the uncontrolled mind and senses.”
Visvanath comments: “Foolish persons like you, not conquering the six plunderers who steal everything, think that they have conquered the ten directions by themselves. Where are the enemies for the wise person who has conquered the mind and thus conquered the six plunderers? Why would he have enemies? He has none, because enemies are created by one’s illusions.”
——————————-
A statement similar to Prahlad’s above instructions to his father is found in the prayers of the Avanti Brahmin:

“Failing to conquer this irrepressible enemy, the mind, whose urges are intolerable and who torments the heart, many people are completely bewildered and create useless quarrel with others. Thus they conclude that other people are either their friends, their enemies or parties indifferent to them.” (Bhāg. 11.23.48)

There is no limit to passionate persons who decide to appoint themselves to be reformers and saviors of the world — or at least saviors of the Hare Krishna movement. Sometimes such self-appointed reformers mount the horses of their minds and dash off to do jihad with the windmills of the world, like Cervantes’s Don Quixote.

Our self-appointed reformer friends may protest, “But we can’t compromise! We should preach in the same way as Srila Bhaktisiddhanta Saraswati Thakur.” However, in their zest they sometimes ignore the important fact that they themselves do not have the purity nor do they command the respect that Srila Bhaktisiddhanta Saraswati had. Moreover, as repeatedly stated above, reform begins from within. If we are not willing to change ourselves, what is the value of our shouting at others?

Strong uncompromised preaching is appropriate when we are speaking to persons who have faith in us. Such faith may be generated hopefully by our saintly behavior, surrender to guru, and knowledge of śāstra. Just by their social position, Sannyāsīs, gurus, preachers, parents, and senior devotees have an obligation to speak in an uncompromising way — provided their followers have faith in them. Faith in guru is the fundamental principle of discipleship. Without such faith, one is not a genuine disciple and will be unable to deeply hear and imbibe the message of sādhu-guru. Conversely for those who take it upon themselves to reform everyone else, if the persons we are “blessing” with our realizations don’t have faith in us, or don’t want to hear from us the only result of our “preaching” may be quarrel and offense. Our “preaching” will be like spitting at the wind. The only result is something unpleasant stuck to our faces.

The ninth offense to the holy name is:

“It is an offense to the holy name to give instructions to persons who are aśraddadhāne, don’t have faith in us, or are vimukhe, uninterested in hearing from us.”

Again, a similar statement to Prahlad’s above instructions to his father is made by Srila Bhaktisiddhanta Saraswati Thakur:

“The world stands in no need of any reformer. The world has a very competent person for guiding its minutest happenings. The person who determines that there is scope for reform of the world, himself stands in need of reform. The world goes on in its own perfect way. No person can deflect it even the breadth of a hair from the course chalked out for it by providence. When we perceive any change being actually effected in the course of events of this world by the agency of any particular individual, we must know very well that the agent possesses no real power at any stage. The agent finds himself driven forward by a force belonging to a different category from himself. The course of the world does not require to be changed by the agency of any person. What is necessary is to change our outlook on this world. This was done for the contemporary generation by the mercy of Sri Chaitanya. It can only be known to recipients of his mercy. The scriptures declare that it is only necessary to listen with an open mind to the name of Krishna from the lips of a bona fide devotee. As soon as Krishna enters the listening ear, he clears up the vision of the listener so that he no longer has any ambition of ever acting the part of a reformer of any other person, because he finds that nobody is left without the very highest guidance. It is therefore his own reform that he is increasingly able to realize, by the eternally continuing mercy of the Supreme Lord.” (From, The Harmonist, May 1932, issue number 11. Article originally titled, “Sree Chaitanya in South India. Pages 325-326.)

The American cartoon character Pogo famously said, “We have met the enemy and he is us.” This is very similar to the Vaiṣṇava conception presented by Prahlad Maharaja, “The only real enemy is our uncontrolled mind and senses.”
All devotees are meant to be reformers, but that reform should first begin with us as individuals. Once we are purified and qualified, guru and senior persons, or even Krishna himself, may instruct us to preach and reform others. We want the blessings and guidance of guru and higher Vaiṣṇavas. Without which we will be stuck listening to our minds and may end up uselessly pursuing war against the windmills of the world.

As Srila Bhaktisiddhanta states above, change is not actually done through the person we see doing it (or the “agent” as he says). The “force” for that change comes from outside (the Lord or his dear devotees). Self-appointed reform is always and necessarily a failure. Divine blessings and empowerment are required. Otherwise, our “powerful jihad” may simply be a product of our imagination. That divine force sometimes comes directly from the Lord, but more often through guru and senior Vaiṣṇavas.

I knew a new bhakta who after memorizing a few verses fancied himself a powerful preacher. Once the prime minister of that country came to visit the devotee community where he lived. Seeing that the prime minister was a lady, our bhakta friend took the opportunity to display his erudition and impress her with one of the few verses he had memorized. He said, “Oh, you are a woman and a politician. Chanakya Pandit has written a verse about you!” And he quoted, viśvāso naiva kartavyaḥ strīṣu rāja-kuleṣu ca — “There are two persons one should not trust; a politician and a woman.”

It was a verse that Srila Prabhupada quoted a number of times. By citing it, our new bhakta friend was speaking in a bold uncompromising way. However, for some reason it didn’t go over well with the Prime Minister.

That was the last time she ever visited the temple.

We should be reformers and destroy the enemies, but our battle has to begin within. Otherwise, if we run around like a child waving a sharp sword in a crowded marketplace, instead of destroying the enemies we may end up destroying the movement of our spiritual master.

In closing, all these points are wonderfully expressed in the following statement from Srila Bhaktisiddhanta Saraswati Thakur Prabhupada:

“We should display anger toward those who are envious of devotees. This is a particular limb of devotional service. A lack of anger against blasphemers is unjustified. But we need to understand who is actually envious of devotees. Those who do not serve the Supreme Lord, the Supersoul and most blissful friend of all living entities, do not benefit themselves but instead invite trouble by their envy of Krishna and the Vaiṣṇavas. Such people are branded as envious, and we should not show them mercy. These people become intoxicated by worshiping materialists. We should both ignore them and display our anger toward them.
“But before that, we have to see whether we ourselves are envious of devotees, whether we ourselves are actually serving Krishna. Or are we serving something else on the pretext of serving Krishna? How much are we attached to Krishna? Are we trying to enjoy the objects meant for Krishna’s enjoyment?

“I think my enjoyment-prone material body is fiercely envious of Krishna and His devotees, because instead of thinking constantly of Krishna’s lotus feet and happiness, I am busy worrying about my own happiness, blaspheming others, and looking for faults. I do not look at myself at all. I am such an offender at the feet of devotees that I should first learn to display anger toward myself. I am so envious of devotees that I should beat myself with shoes simply to purify myself. Then I can set an example for others and sincerely engage in the service of Hari, guru, and the Vaiṣṇavas. I must remember that everyone is worshiping Hari but me. I am unable to do so. I should also remember that I may die at any moment.
“So first we should show anger toward our own sinful propensities, such as our desire for profit, adoration, and distinction and our propensity to cheat others. We must correct ourselves first. Otherwise, we cannot correct others. Then we have to correct those who are related to us, who are envious of the spiritual master and Krishna and who are pulling us toward material enjoyment by tempting us. This is the secret of success.” (From Amrta Vani, collected teachings of Srila Bhaktisiddhanta Saraswati Thakur. Compiled in Bengali by Sri Bhakti Bhagavat Mayukha Maharaja. Adapted and translated into English by Bhumipati Das and Isvara Das. Touchstone Media. Mumbai. 2004. Pages 112-113.)

May the Vaiṣṇavas be pleased with this humble offering.
Vaiṣṇava-kṛpā-prārthī,
Madhavananda Das.
Sri Jagannath Puri Dham.
Nṛsiṁha-caturdaśī 20 May 2016