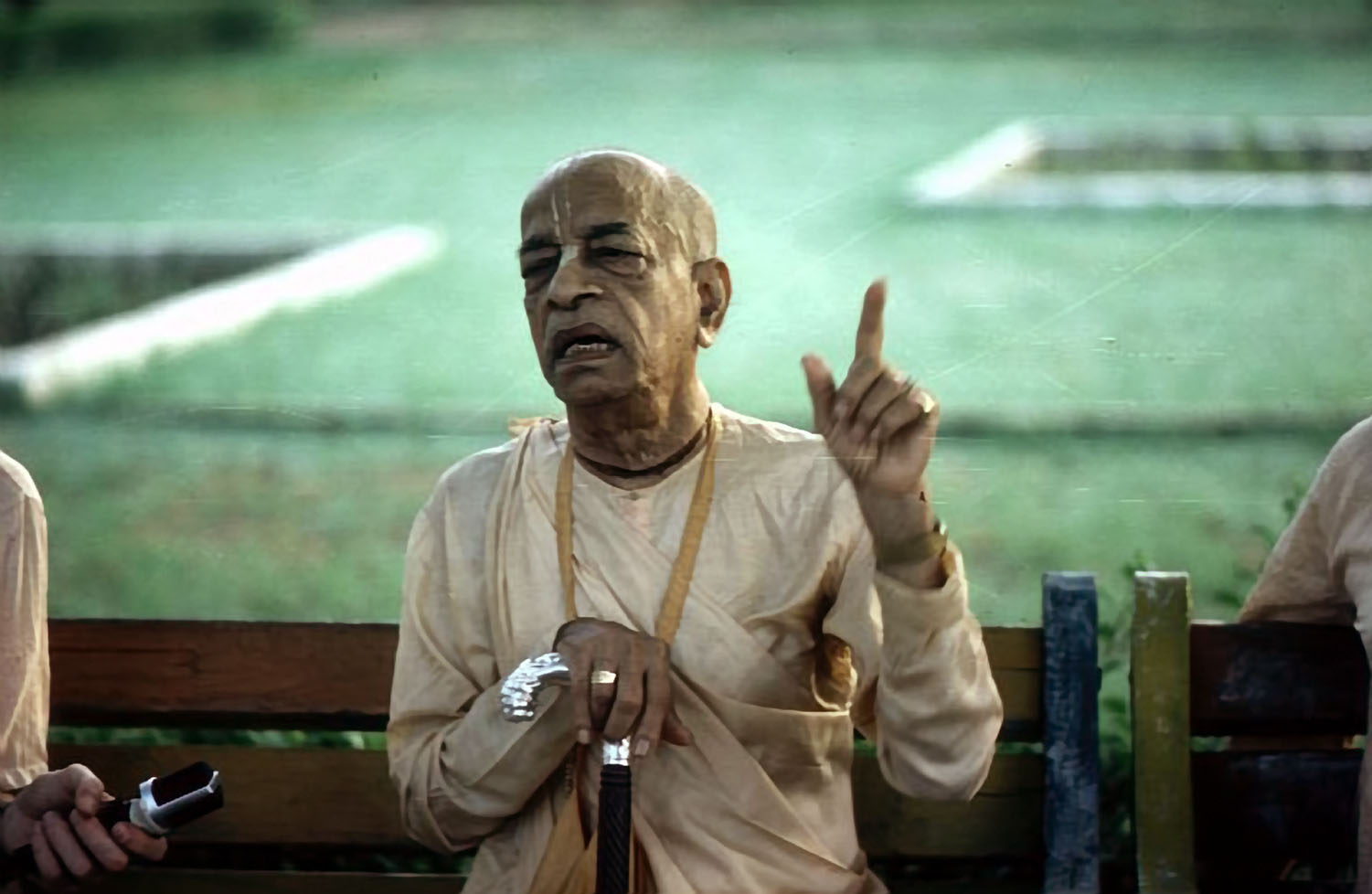 Prabhupāda: We think, according to our philosophy, everything is the property of the Supreme Lord, and we are all sons. So everyone has the right to use the property of the father. So that consciousness should be spread. This barrier of nationalism is against Kṛṣṇa consciousness. Why there should be? Actually everything belongs to God. Īśāvāsyam idaṁ sarvam (ISO 1). The sky, the land, the water, they are all creation of God, God’s property. But we should not take more than what is allotted to us. That is real life. Otherwise, I have practically studied that there is enough land. Just like in your country, in America, there is enough land, not utilized. They can be properly utilized, and if food grains are produced, there is no question of scarcity of food all over the world. Not only in America—in Africa, in Australia. (break) If we get nourishing food, every one of us, so there is no economic problem.

Mr. Boyd: How do we handle these people who don’t seem to want to carry their own weight, though, Prabhupāda? The ones who don’t want to work and help produce this food?

Prabhupāda: They should be trained up. Therefore Vedic civilization is training. Some section of the people, they should be very intellectuals, brain, just like to maintain this body we require first of all the brain. If the brain is not order, then other parts, they may be there, but they are also useless. So similarly, in the society, some intellectuals should be maintained. They are called brāhmaṇas, and some of the brāhmaṇas, they are sannyāsīs. They are simply meant for giving good instruction. They should personally become very good and intellectual, and they should give instruction to other people what is the value of life, how to live. This is one section. They should be free from the anxiety of maintaining themselves. The society should treat them as children and give them all necessities, bare necessities, not they are meant for living very luxuriously. No. Simple living. Then the next class, kṣatriyas, the politicians, administrators, they are also required to give protection to the people from injury. Kṣatriya, kṣat means injury, and trāyate, “one who saves people from injury.” It is kṣatriya’s duty. So kṣatriya should protect all the living entities, including the animals. They are also subjects. So the first, intellectual brāhmaṇas, then kṣatriya. Then vaiśyas, their business is to produce food. Food production you can do by agriculture, kṛṣi, and by giving protection to the cows. If you get sufficient food grains, like rice, wheat, pulses, and sufficient milk—from milk you get yogurt, butter, ghee—then your all food problem is solved. You must eat. You must eat, you must live properly. So this first, second, third, the intellectual class, the administrative class, and the productive class, these three classes must be there in the society. And those who cannot be grouped either of these three classes, they should generally help as workers. They are called śūdras. So the workers means… Suppose you require a sitting place: the carpenter is there. Suppose you require a knife: so the blacksmith is there. You require clothing: the weaver is there. In this way, four classes of men. First class, second class, third class, or the intellectuals, the administrators, the producers and the general workers. This is Vedic system of division. Brāhmaṇa… This is for our living condition, and then human life especially meant for spiritual realization, self-realization. For that purpose, again, another four divisions. Generally, the brahmacārī, student life; gṛhastha, married life; vānaprastha, retired life; and sannyāsa, renounced life. So at the end of life one should be renounced from all other responsibilities and completely devote his life for Kṛṣṇa consciousness, or God consciousness. In this way, when a person dies in God consciousness, his life is perfect. This is Vedic civilization. Eight divisions, varṇa and āśrama. And if you simply produce śūdras, working class, then you cannot have any happiness. That is not possible. And nowadays democratic, if you send some śūdras to act as kṣatriyas, they cannot do it. You have got practical experience. In Vietnam, what happened?

Puṣṭa Kṛṣṇa: The American soldiers, they were simply taking intoxication, hunting after prostitutes and running from the enemy.

Prabhupāda: And when they were attacked, they were running away. Because they are śūdras. How they can fight? They are not trained up as kṣatriyas. Huh? Anyone who is unemployed, let him become a soldier, but he cannot fight. That is not possible. Neither this class of men can have good brain to give direction to the society. The democracy means anyone can go to the government, and because he’s not kṣatriya, his only business is how to get money so long he’s on the post. Just like you did not like your President, Mr. Nixon. So that is the risk. If you keep the society in chaotic condition, any department, intellectual, administration, production, they’ll be all topsy turvey, and there cannot be any peace in the world. So this Vedic scheme, varṇāśrama, is a very important scheme. If possible it should be introduced and taken up very seriously. That is one of the items of Kṛṣṇa consciousness movement, to reestablish the institution of varṇa and āśrama. Not by birth, but by qualification. Cātur-varṇyaṁ mayā sṛṣṭaṁ guṇa-karma-vibhāgaśaḥ (BG 4.13). Guṇa-karma, by quality. In India, the varṇāśrama is there, but it is not organized because the government does not take care. The government is imitating Western way of life, “There is no need of brāhmaṇa, there is no need of kṣatriya, simply śūdras.” Everywhere this is the position, the śūdra population, kalau śūdra sambhavaḥ. In this age everyone is a śūdra. So it doesn’t matter, everyone is born śūdra, but he should be trained up. Just like in our practical life we see that everyone is not born a scientist or engineer or lawyer. Everyone is born innocent, child, then he’s trained up by the guardians. Similarly, there should be a training how to become brāhmaṇa, how to become kṣatriya, how to become vaiśya. And the government should see that everyone, as he is trained up, he is working according to his quality and occupational duty. Then there will be complete peace and harmony. That human society is perfect.

Vipina: His question is that now the government is corrupt, so what can be immediately done?

Prabhupāda: How there can be, because the democracy? You are corrupt, therefore your government is corrupt. You correct yourself, the government will be automatically corrected. If you are rascals, the government will be rascals. The government means elected. So if you are not rascal, you’ll not elect another rascal to take charge of the government affairs. But because you are rascal, you’ll send another rascal. So how can you expect good government? You do not know whom to select. And besides that, the whole population is rascal, śūdra. So anyone you elect, if he’s by qualification he’s a śūdra, worker, he’s not intelligent person, he’s not brāhmaṇa, he’s not kṣatriya. Actually, the legislative assembly, or in your country, Senate? They should be all brāhmaṇas. They give advice. Formerly this was the system. Although it was monarchy, even Lord Rāmacandra or similar kings, they were not ruling independently—they were taking advice from learned brāhmaṇas, sages. So the legislative assembly should be composition of intellectual brāhmaṇas. Then the other administrators, the President or the minister, they should be kṣatriyas. In this way, if social organization is made, then there will be perfect peace. If śūdras are allowed to rule over, what they know? Their only aim is that so long he is in the office, “Let me collect some money,” that’s all. And that will be the latest atmosphere, dasyu-dharmabhiḥ. Rājanyair dasyu-dharmabhiḥ. All the government men will become thieves and rogues. Dasyu, dasyu means thieves and rogues. So as the thieves and rogues capture you on the street and ask “Whatever you have got, give, otherwise I shall kill you,” so this will be the position in the Kali-yuga. It is happening now. You cannot have any private property; everything you have to declare. Otherwise, it will be taken by force. So people will be very much embarrassed by two things: one thing is taxation, and another thing will be scarcity of food. In this way, all the people all over the world will be embarrassed, so much so that they will leave their home, hearth and home, ācchinna-dāra-draviṇā yāsyanti giri-kānanam. Being separated from family and property, they will take shelter in the hilly ranges or in the forest to get relief. This will be the position. Harassment, so much harassment, by nature, by government. So therefore for complete happy society, this Kṛṣṇa consciousness movement is essential. All intelligent persons, they should join this movement and reform the present social, political, religious. All field of activities, they should reform. Then people will be happy. Not only happy in this life, but also next life. Unfortunately, the present education does not provide knowledge of next life. There is no such education. They are kept in darkness like cats and dogs. They do not know that there is life after death, and we get our next life according to our present activities—karmaṇā daiva-netreṇa (SB 3.31.1). These things are unknown. Very risky life. If I am prime minister in this life or president, and if I am going to become a dog next life, then what is the benefit of becoming prime minister or president? And nature’s law is that you get your next life according to the mentality at the time of death. So if I have acted like cats and dogs throughout whole life, naturally I shall think like cats and dogs at the time of death. Then next life is cats and dogs. So I may be worshiped here in a statue, that “Here is our beloved prime minister,” and next life, I’m barking as a dog. Then what is the benefit?”