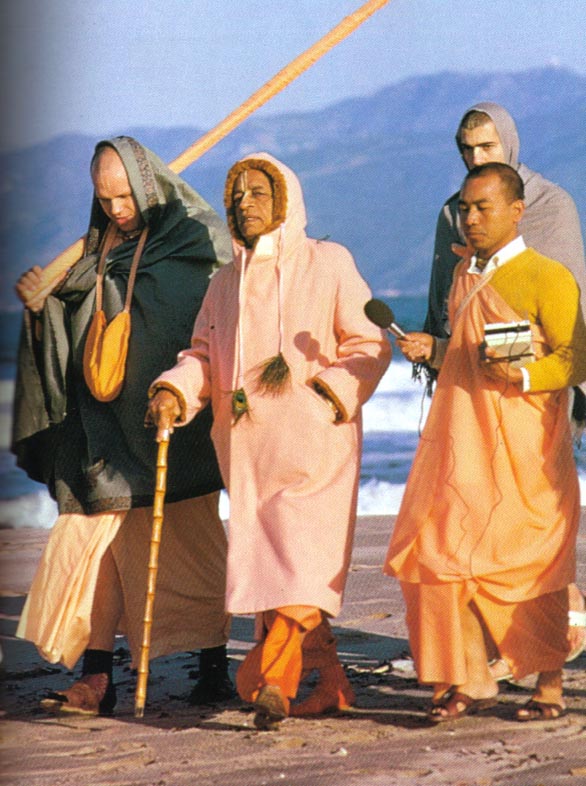 An excerpt of the article which originally appeared in the Back To Godhead Magazine, November/December 2009 Edition.

By His Divine Grace A. C. Bhaktivedanta Swami Prabhuapada

A selection of quotations from the books, letters, and talks of His Divine Grace A. C. Bhaktivedanta Swami Prabhupada, with comments (in italics) by Drutakarma Dasa.

According to Darwin, the origin of the bodies of living things occurred like this: In some warm pond, chemicals combined to produce the first single-celled organism. Once this happened, multicellular creatures arose in the water, diversifying into plants and animals. Later some of these plants and animals migrated onto the land. The first land animals were amphibians and reptiles. Later the mammals emerged, and finally humans came into existence.

Today, some theologians, and many other people, explain this development in terms of theistic evolution, with God operating in such a way as to cause the generation of the first life forms and their subsequent evolution into various species without violating the laws of nature recognized by modern science. But according to Srila Prabhupada, the Bhagavatam says that all the life forms, including the most intelligent, were manifested at the beginning of the day of Brahma, which occurred about 2 billion years ago. Thus the Bhagavatam view of the origin of species—the timing, order, and process—is different from that of both unguided materialistic evolution and guided theistic evolution.

In the following excerpt from Srila Prabhupada’s purport to Srimad-Bhagavatam (4.29.60), Prabhupada expands upon one of the points he made in the excerpt above, namely that there is more to a living thing than the gross material body.

Since modern scientists and philosophers are too materialistic, and since their knowledge is taken away by the illusory energy, they cannot explain how the gross body is changing. The materialistic philosopher Darwin has tried to study the changes of the gross body, but because he had no knowledge of either the subtle body or the soul, he could not clearly explain how the evolutionary process is going on.

According to the Bhagavatam worldview, there is a kind of evolution, but not the kind that Darwin imagined. The soul evolves through different kinds of material bodies until it comes to the human form, which offers liberation from material existence. As explained in Srila Prabhupada’s purport to text 5.14.30, some souls come to the bodies of humans from the bodies of monkeys.

According to the Bhagavatam, time goes in cycles of four yugas, or ages. We are now in the age of Kali, which is dominated by the tamo-guna, or mode of ignorance. Srila Prabhupada takes it as ironic that evolutionists falsely believe that the human body evolved from the bodies of ancient apes. In terms of the evolution of the soul, this is actually in some sense true, because in the age of Kali most souls entering human bodies are born in the mode of ignorance and came into their human bodies from the monkey or ape bodies they had in their last lives.

The importance of the human body in the evolution of the soul through different bodies is explained in Srimad-Bhagavatam (7.13.25):

In the course of the evolutionary process, which is caused by fruitive activities due to undesirable material sense gratification, I have received this human form of life, which can lead to the heavenly planets, to liberation, to the lower species, or to rebirth among human beings.

Srila Prabhupada elaborates his purport to this text.

All living entities within this material world are undergoing the cycle of birth and death according to the laws of nature. This struggle of birth and death in different species may be called the evolutionary process, but in the Western world it has been wrongly explained. Darwin’s theory of evolution from animal to man is incomplete because the theory does not present the reverse condition, namely evolution from man to animal. In this verse, however, evolution has been very well explained on the strength of Vedic authority. Human life, which is obtained in the course of the evolutionary process, is a chance for elevation (svargapavarga) or for degradation (tirashcham punar asya cha). If one uses this human form of life properly, he can elevate himself to the higher planetary systems, where material happiness is many thousands of times better than on this planet, or one may cultivate knowledge by which to become free from the evolutionary process and be reinstated in one’s original spiritual life. This is called apavarga, or liberation from the punishment of material existence. . . .

The word tirashcham refers to degraded life. Human life, of course, provides an opportunity for the best living conditions. As Western people think, from the monkeys come the human beings, who are more comfortably situated. However, if one does not utilize his human life for svarga or apavarga, he falls again to the degraded life of animals like dogs and hogs. Therefore a sane human being must consider whether he will elevate himself to the higher planets, prepare to free himself from the evolutionary process, or travel again through the evolutionary process in higher and lower grades of life. If one works piously one may be elevated to the higher planetary systems or achieve liberation and return home, back to Godhead, but otherwise one may be degraded to a life as a dog, a hog, and so on. As explained in Bhagavad-gita (9.25), yanti deva-vrata devan. Those interested in being elevated to the higher planetary systems (Devaloka or Svargaloka) must prepare to do so. Similarly, if one wants liberation and wants to return home, back to Godhead, he should prepare himself for that purpose.

Our Krishna consciousness movement is therefore the highest movement for the benediction of human society because this movement is teaching people how to go back home, back to Godhead.

One reason Srila Prabhupada objected to the Darwinian theory of evolution was its compatibility with atheism and materialism, which serve to distract people from the real goal of human life, thus insuring for them continued suffering in the cycle of birth and death. In the following conversation with one of his scientifically trained disciples (biochemist Dr. Thoudam Damodar Singh, later known as Bhaktisvarupa Damodara Swami), Srila Prabhupada blames governments for promoting evolution. The conversation took place on February 3, 1977, in Bhubaneswar, India.

Srila Prabhupada: So why is the government fostering this godless “evolution” science—this dishonesty? Because the government leaders are themselves dishonest. They want simply to accumulate money by inducing people to work in their big industries. So they are cheating the people out of their birthright: to live the simple, natural life, to become God conscious, and at life’s end, to go back home to God. The government must make sure that people develop genuine God consciousness. That is the government leaders’ actual business. They should promote genuine God consciousness, strict following of God’s natural laws. Anything not genuine should be finished. Nothing bogus allowed. This is real government. This we are working for. The government leaders’ business is to see that the scientific or intellectual group is giving the students a sense of the transcendent Personality of Godhead, a sense of the divine.

Dr. Singh: Nowadays, the government leaders are seeing that the intellectuals impart a sense of all-pervasive matter, with no soul and no Supreme Soul. A sense of the demoniac, one might say. It’s hard to imagine these demoniac types being convinced by godly arguments.

Srila Prabhupada: We must push forward. Gradually the whole world will see that here are first-class gentlemen and here is first-class culture. Vedic, godly culture. Real culture. We must always remember, people are inclined to this God conscious culture. It is natural. And Lord Krishna wants it. Why should we care about some rascal’s objections? Do something to spread God conscious culture. It is Krishna’s business. Print books. Travel all over the world. Challenge this godless government policy. Challenge their intellectual hirelings. “Come on, rascal scientists. You have given yourself to spreading materialism and godlessness. We shall scientifically establish the existence of the spiritual self—the soul—and God.”

Srila Prabhupada directly instructed his scientifically trained disciples to challenge the Darwinian theory of evolution. Sometimes he would refer to the supporters of the theory of evolution in strong terms (“rascals”). Some may object that not all evolutionists are godless materialists. For example, today there are some who support varieties of theistic evolution, which involve accepting as true the Darwinian picture of the development of bodies of living things. They say, “God created the bodies of plants and animals, but He did it by Darwinian evolution.” As can be seen in this selection of quotes, this idea is not compatible with the account of the origin of the bodies of living things given in the Vedic literature (defined broadly as including the Puranas). 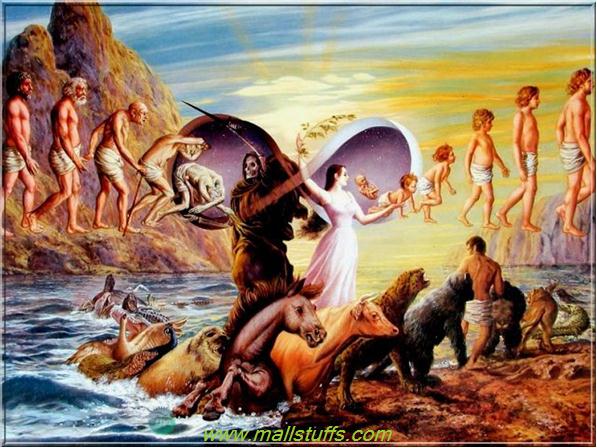