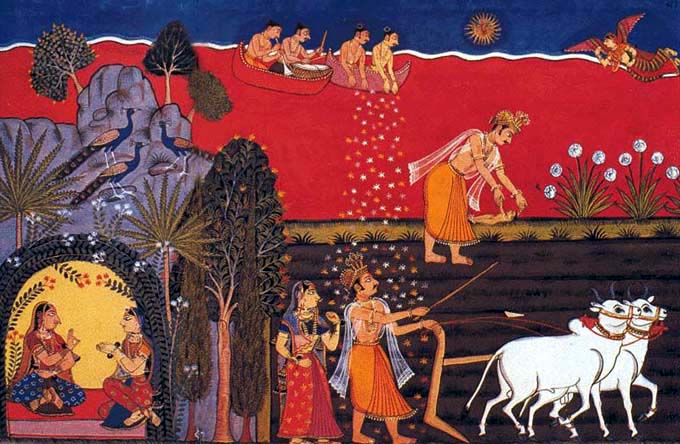 In honor of Sita Devi’s Appearance, we present a beautiful Indian Miniature depicting an episode from the Ramayana — the Birth of Sita devi. Sita devi, who is an incarnation of Laksmi, was not born of woman but of the Earth Goddess, Bhumi devi herself. In Maharishi Valmiki’s own words, Ramayana is known as the noble story of Sita — “Sita-ayah Charitam Mahat”.

Here is the story of her birth and discovery: 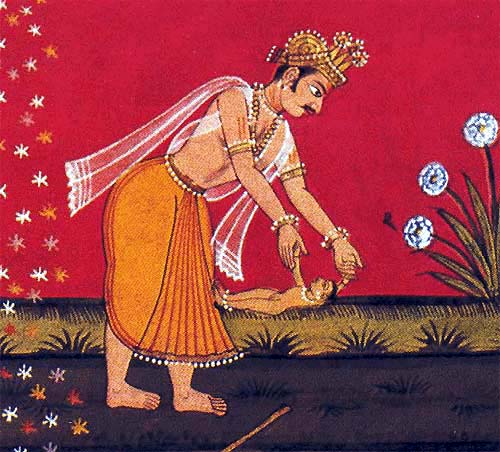 Janaka Maharaj, the king of Mithila, was ploughing a piece of land to prepare it for conducting a yajna. While ploughing, he unearthed a golden casket in which he found a beautiful girl, which caused him to be greatly overjoyed. Because land ploughed by the yoke is called ‘sita’, he named the baby Sita.

With her arrival, the king’s good fortune improved greatly, and his queen gave birth to a daughter named Urmila. The royal couple brought up their children with great affection, giving them good education and all facility. The two beautiful girls, displaying all noble qualities and intelligence, endeared themselves to all and grew to become ideal princesses.

Sita devi was to be given in marriage to anyone who could bend the powerful bow given to Janaka by Lord Shiva. Rama succeeded in bending the great bow, and he married Sita. Their later, inconceivable pastimes are presented throughout Sri Ramayana. 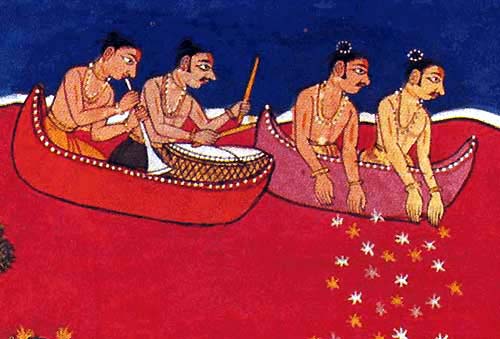 The artist of this Miniature, which was painted in the Mewar school of Udaipur, has presented a panoramic scene of the event of Sita devi’s Appearance. Central to the picture is the scene of Janaka ploughing the field, with his wife following along behind. Janaka guides two beautiful white oxen, who draw a simple plough. The dark brown, furrowed earth gives a rich sense of the field Sita took birth in. At the top edge of the field we see the king reaching down to grasp the hand of baby Sita, who lies on the earth near a beautiful stand of flowers.

A most interesting element of this painting is the upper half, which is given over to create the mystical mood of this pastime. A small blue band above denotes the sky, which is separated by a wavy white line from a bold red background that marks the transcendental nature of this event. Buoyed along in this sea of red are two boats, one carrying celestial musicians who herald Sita’s birth, the other spilling petals down over the king and queen, indicating their great good fortune at being the recipients of the Lord’s mercy. On the right, a winged messenger flutters. 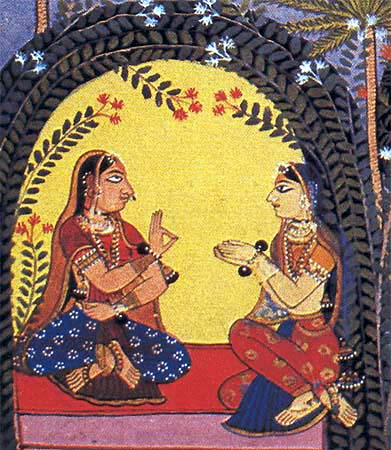 Below and left, in an arched bower beneath a hillside, we get a glimpse of Sita devi’s future pastimes, which are sectioned off from the Appearance scene in the field by a dense grove of trees.

This is a beautiful example of the many Sita-Rama pastimes which are preserved in Indian Miniatures.