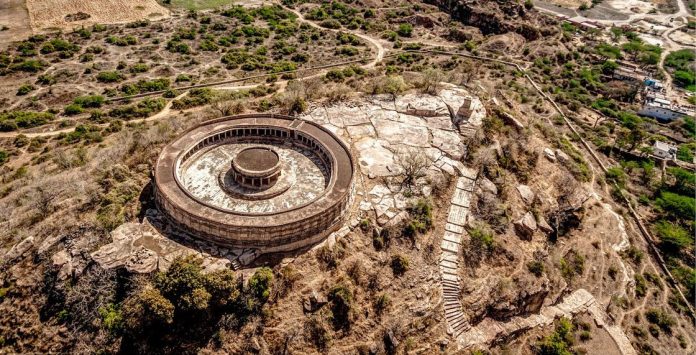 Rich cultural heritage has blessed India with numerous places worth visiting. Many of these are lying hidden in little-known towns and villages, which even many of the tourist circles, at times have no clue about. Whenever you come across such spots, you tend to realize that the current one is more beautiful than the previous one. One of such hidden spots is Mitawali which is situated about 40-50 KM from Gwalior.

A unique ancient temple resembling Parliament House stands atop a hill surrounded by ravines in Madhya Pradesh’s Chambal Valley. The 8th-century Chausath Yogini temple is on more than 100 stone pillars and is said to have inspired the design for Indian Parliament House.

The structures of Indian Parliament House, known as Sansad Bhavan, and Mitawali temple are strikingly similar. It seems that the architects drew inspiration from this temple in designing and building the Parliament House.

The Parliament building, designed by renowned architects Sir Edwin Lutyens and Sir Herbert Baker, was constructed in 1927, 20 years before India’s independence in 1947. The building has been highly appreciated for its design across the world. It is touted to be among one of the world’s best architectural wonders. 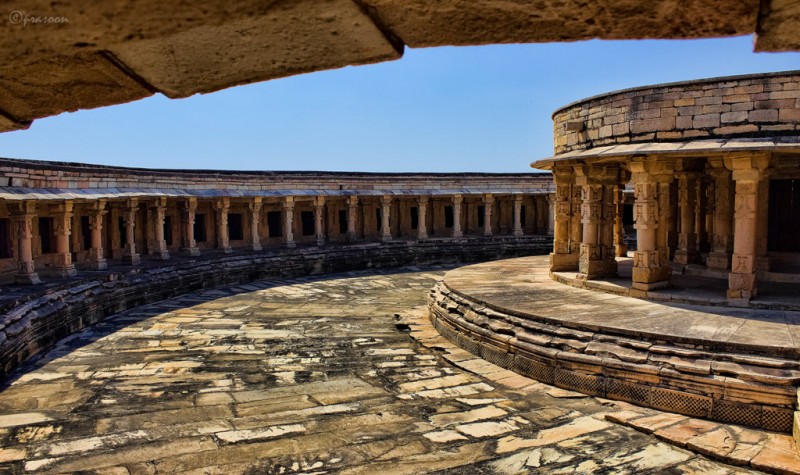 But the temple, which the archaeologists and locals in Mitawali believe might have inspired the magnificent building, is in a state of dilapidation. The Archaeological Survey of India has only deputed a caretaker at the temple premises. Absence of any concerted renovation work is affecting the entire structure, especially the sculptures on the temple wall.

This place has been lying hidden/ forgotten since ages, so very less information is available about this place. According to an inscription dated to 1323 AD (Vikram Samvat), the temple was built by Maharaja Devapala in 8th century.

It is said that the temple was used to be a seat of education of astrology and mathematics with the use of the rays and shades of the Sun.

The Temple is dedicated to Lord Shiva and consists of 64 Yogini small temples surrounding the main Central temple of Lord Shiva. Each small temple has an image of Lord Shiva, also known as Shivling. There was a time when each chamber also had an idol of yogini accompanying Shiva. While some yogini idols were stolen, some others are adorning Indian museums.

Chausath Yogini Temple (Chausath meaning 64) is located on a hill which is about 100 feet (30 m) in height and there are 100 steps to climb leading to the entrance of the temple.

The temple is externally circular in shape with a radius of 170 feet (52 m) and an open mandapa in the centre, separated by a courtyard, which is circular in shape, where Lord Shiva is deified. It is said that the roof over the 64 chambers and the central shrine had towers or shikharas which were probably removed during later modifications. Outer wall of the temple is decorated with numerous images of Hindu Gods and Goddesses.

Unlike the Parliament House that has pillars on the outer verandah, the Mitawali Temple has pillars around the outer circumambulatory path that opens into the central courtyard.

Environment inside the temple is utmost peaceful, walking around in the lonely corridors is a rare delicacy.