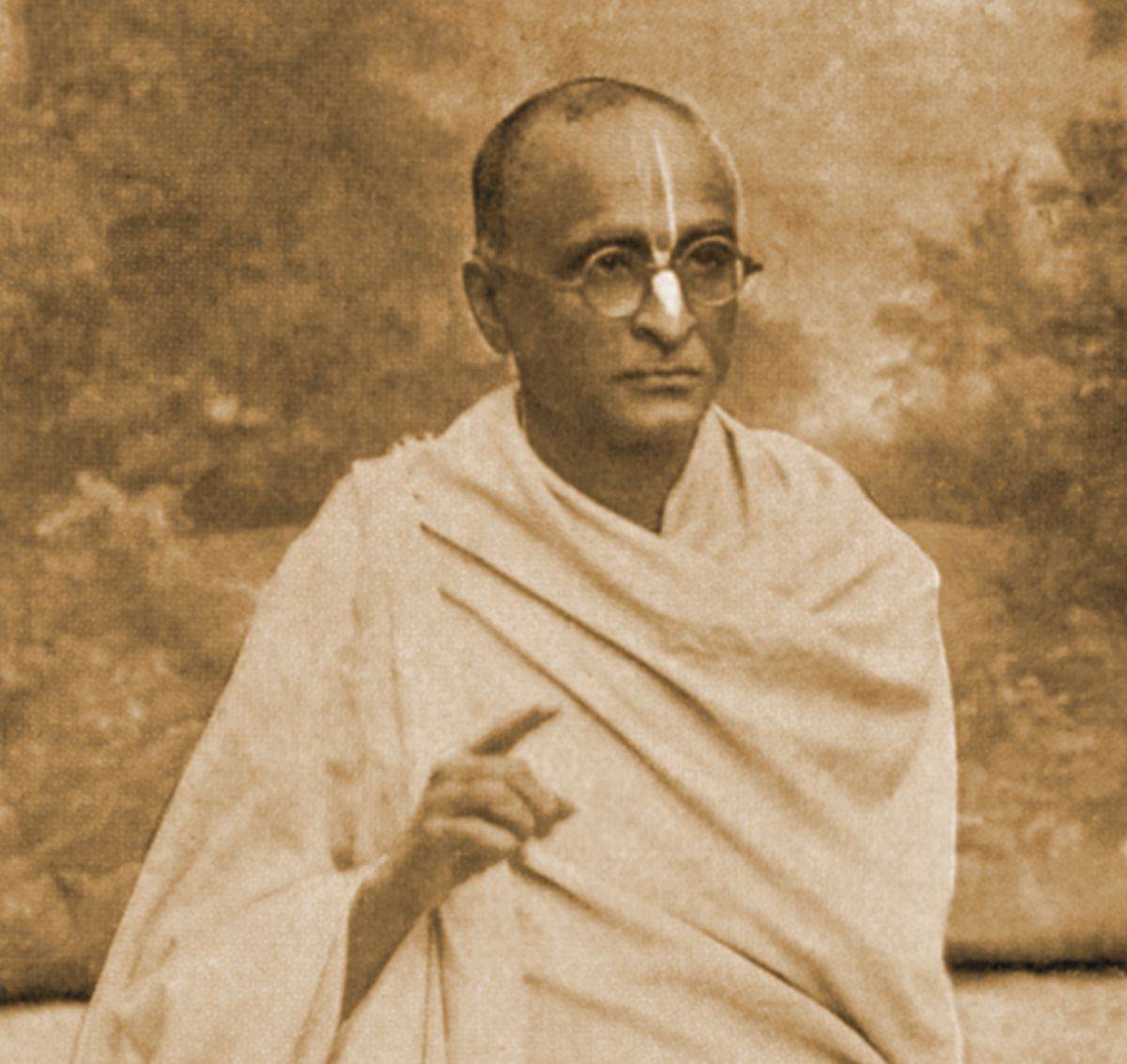 From the book Vaktrtavali by His Divine Grace Bhaktisiddhanta Sarasvati Thakura.

The definition of philosophy, and the function and characteristics of the internal and external senses:

The word darśana refers to the way a relationship between a seer and the seen is established. Generally, one sees an object with the eye; it is with the eyes that we visualize an object’s external form and shape and gather other external knowledge about it. However, it’s not a fact that one can see just because his eyes are functional. For one to see, the eyes need a guide or director.

Although the eye is the medium for the seeing function, we must accept that it is the mind that actually causes the eyes to see. Even if the eyes have no mechanical problems, they cannot function without the mind’s direction.

But the mind does not only direct the eyes. Four other knowledge-acquiring senses work under the mind’s control, and with their support, the mind collects feelings and knowledge about different objects. Often, if an object has no external form or shape, or if it’s too small or too large, or if it’s prone to be covered in one-way or another, or somehow deceptive, or at a distance, we cannot perceive it properly even if we have functioning eyes.

Our four other senses also help us know about external objects. With the help of these senses, or knowledge-acquiring devices, the mind, or lord of the senses, is able to realize things not normally understood by any one sense individually. And those sensations the knowledge-acquiring senses fail to grasp directly, the mind can deduce even without direct perception, because it has other devices in its possession. Although direct perception is the only way to actually know an object, still, if the mind is not infested with discrepancies, the mind’s hypothesizing will also help direct perception. Direct perception can, however, sometimes distort the truth and trick the mind so it doesn’t acquire exact truth. Knowledge gathered under the influence of or with the help of intoxicants, for example, often leads to a faulty conclusion or mistake.

Although in philosophy darśana generally refers to the action of the eyes, when the other senses recognize an object, this too is called darśana. Philosophies that discuss material objects are called “material science,” and philosophies related to objects beyond gross matter fall under the category of cetanābhāsa, or transcendental sophistry.

Evidence and that which is made evident by Vedānta:

The Upaniṣads are the head of the Vedas. Realizing it would be difficult for people to understand the actual purport of the Upaniṣads, Vyāsadeva composed the Brahma-sūtra based on the Upaniṣads. This Brahma-sūtra has become famous as the Uttara-mimāṁsā, Śārīraka-sutra, or Vedānta-darśana. By refuting other philosophers’ objections and by accepting the Vedic statements, or transcendental sound, as the main pramāṇa (while accepting processes like direct perception and hypothesis as secondary supports), Śrī Vyāsa has described the Vedic conclusion.

All of India’s Vedic religious systems are more or less constituted of the Vedanta-darśana. This Śārīraka-mimāṁsā was explained by a number of commentators and interpreters – among them, Baudhāyana, Taṅka, Bhāruci, and Dramiḍa are renowned. Others, like Śrī Śaṅkarācārya, have also become famous vedāntācāryas by writing commentaries, like the Śārīraka Bhāśya.

The paramahaṁsa-saṁhitā, Śrīmad-Bhāgavatam, is cited by the swanlike and learned as the natural commentary on the Brahma-sutra. Thoughtful persons like Yādavācārya, Prabhākara, and Bhāskara Bhatta have also written books and preached different philosophies as teachers of Vedānta. Among Śaṅkarācārya’s followers we find encouragement only for kevalādvaita philosophy, such as in the writings of Ānandagiri, Sāyaṇamādhava, and in the Bhāmati ṭikā of Vācaspati Miśra. A few hundreds years ago, following the doctrine of the Brahma-sūtra, or Uttara Mimamsa, some ācāryas, who were devotees of the Supreme Lord, appeared and discovered that the Supreme Brahman is full of transcendental qualities and variegatedness, contrary to the kevalādvaita philosophy, which teaches impersonal monism. Only these ācāryas are protectors and propagators of brahma-darśana. They were not ordinary philosophers; they possessed knowledge of one’s relationship with the Supreme Lord and were expert in establishing the correct conclusion. Therefore, they were aware of the ultimate goal of life and the process of achieving it in relation to the Absolute Truth.

The cause of the illusory understanding and an example:

In ancient times, astrologers used to imagine that planet earth, our residence and shelter, was at the center of the universe, and that the sun, planets, stars, and so on, orbit around the earth. But by experience and subtle analysis, their ideas changed. Now they say that our earth actually orbits the sun once every solar year, as do Mercury, Venus, and Mars. As earth’s residents fell into illusion while trying to establish their place at the center of the universe, so under the sway of wrong beliefs, materialistic scientists exclaim their faith in material enjoyment by accepting their own gross body as the center for such enjoyment. The psychologists, thinking the mind the master of the body and therefore of more scientific interest than the body, place the mind in the center of the gross body and study things through the eye of the mind while maintaining that gross matter is the greater object of vision. Matter cannot see the mind or understand it, but the mind can see matter – this is their conviction. Actually, without the presence of the power to think, or the intelligence, neither the gross eyes nor the subtle mind are capable of seeing anything. Without the ability to think, the senses are ineffective and powerless.

The opinions of different philosophers in different countries:

Cārvāka, who didn’t believe in the next life, Epicurus, who was a gross materialist, Huxley, who was an agnostic and disciple of ignorance, the Skeptics, who were doubtful about life after death, Hegel, who followed divine knowledge, Schopenhauer, Kant and many of the ancient Greek philosophers as well as the philosophers of our country, have spent their lives studying philosophical and psychological literature. They had displayed their own experience and learned to see things according to their respective philosophical paths. By placing mental speculation or empirical experience at the center of their thought flow, they ended up showing only different faulty pictures to the eyes of different seers in all these places. Since one of their philosophies is often diametrically opposed to that of another, dispute was inevitable, with each philosophy trying to pull the audience into its respective line. Those with similar mentalities joined together in thought and, like the ignorant astronomers of ancient times, nourished their faulty beliefs by accepting one philosophy or another as king. Those who see varieties of things present in their own philosophical world fill up their own insignificant minds and memories with those things according to their adhikāra.

Just as astronomers once thought our earth the center of the universe, and as human beings once thought the body the center of all realization, so, as the various philosophers developed their knowledge they came to accept the mind as the self, or center, of existence. Because of that, only “self-worship,” or impersonalism, has made a place for itself in Vedānta philosophy. As soon as one speaks about Vedānta, immediately the various narrow-minded philosophies like Kevalādvaitavāda, Jīveśvaraikyavāda, Jaḍacidaikyavāda, Vivartavāda, Niḥśaktikavāda, Saguṇa-nirguṇaikyavāda, Nirbhedabrahmavāda, and Nirviśeṣavāda come to mind. These philosophies cover the eyes of all kinds of philosophers in the name of being universally beneficial and liberal. Moreover, innumerable narrow-minded endeavors have spoiled and are spoiling the actual, liberal, universal, nonsectarian philosophies like Śuddhādvaita, Viśiṣṭādvaita, and Dvaitādvaita, which are based on realization of spiritual variegatedness and a personal God. These impersonal philosophies stubbornly try to prove that the Vedānta does not confirm the conclusions of the actual nonsectarian doctrines.