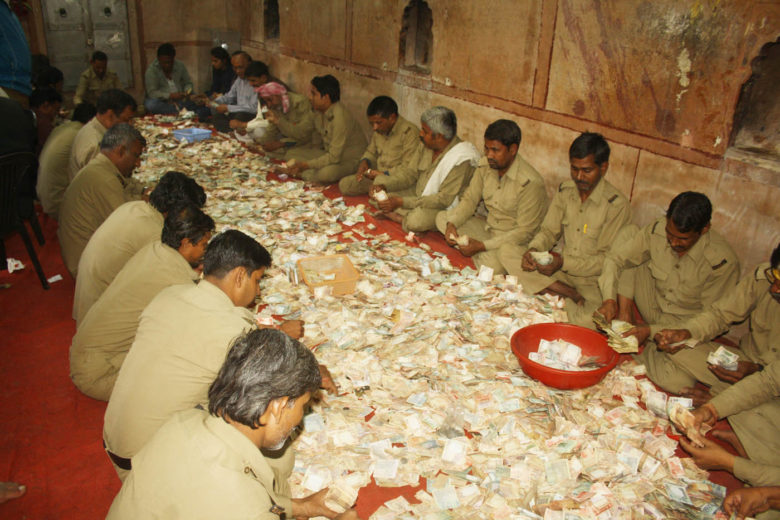 Secret donation boxes at famous temples of Vraja are slowly getting flooded with Rs. 500 and Rs. 1,000 notes following the government’s decision to scrap these denomination notes.

The Union Government’s decision to ban Rs. 500 and Rs. 1000 currency notes and replace them with high denomination notes has prompted the temple authorities to get the donation boxes checked.

Out of 16 donation boxes in the temple, the donation box no. 2 of the Banke Bihari temple was opened amid high security on Friday. Three dozens of employees of the temples were engaged to segregate the banned notes and counting them. Three locks of steel made donation box were opened to take out the cash. The bank officials from the Canara Bank and Bank of India assisted the workers in separating the notes.

It took more than three hours to count the notes. Some jewelries and foreign currency were also found in the temple. It will take 18vrnp08around ten days to open all the boxes and count the notes. 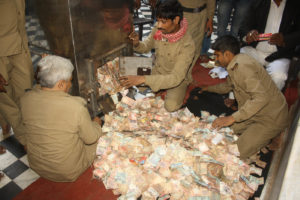 Interestingly, this historic temple records higher footfalls than even the Vaishno Devi shrine in Katra, Jammu. According to UP tourism officer in Mathura, Shri Anupam Shrivastava, nearly 1.26 crore devotees visited Banke Bihari Mandir in 2015. This figure is significantly higher to the 77.76 lakhs devotees who visited Vaishno Devi Temple in the corresponding period. Sources said the increase footfalls of devotees are the main reason for the increase in donations at the temple.