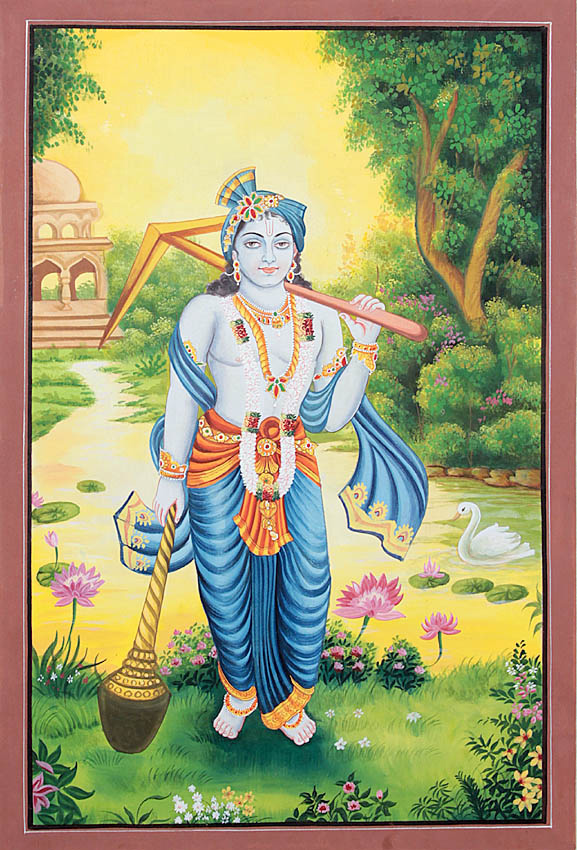 Who is Lord Balarama?

The Supreme Personality of Godhead, Krishna, is the fountainhead of all incarnations. Lord Balarama is His second body. They are both one and the same identity. They differ only in form. Balarama is the first bodily expansion of Krishna, and He assists in Lord Krishna's transcendental pastimes. He is the source of the entire spiritual world and is the adi-guru, the original spiritual master.

He assumes five other forms to serve Lord Krishna. He Himself helps in the pastimes of Lord Krishna, and He does the work of creation in four other forms called the catur-vyuha (four armed) forms known as Vasudeva, Sankarshana, Pradyumna and Anirudha. He executes the orders of Lord Krishna in the work of creation, and in the form of Lord Sesa He serves Sri Krishna in various ways. In all the forms He tastes the transcendental bliss of serving Krishna. No one can approach Krishna without first getting the mercy of Baladeva.

When Baladeva appeared as the seventh child in the womb of Devaki, she could understand that this was a divine child and this made her all the more concerned about His safety. Even Kamsa could sense His potency and he became fearful, thinking he may have been tricked by the prophecy that he will be slain only by the eight child of Devaki. At this time Krishna instructed Yogamaya, His internal potency, to transfer the unborn child from the womb of Devaki to that of Rohini, one of the other wives of Vasudeva, who was hiding from Kamsa in the house of Nanda Maharaja in Gokul.

In this way Balarama was born in Gokul under the protection of Nanda Maharaja. Garga Muni the venerable kulguru (family priest) of the Yadu dynasty revealed to Rohini that the child she was carrying was indeed that of her husband Vasudeva. At the time of the name-giving ceremony he named the child Rama, one who gives all pleasures. Referring to the immense strength of the child, Garga Muni predicted that He will also be known as Balarama (bala meaning strength). Since He was forcibly attracted from the womb of Devaki to that of Rohini, He was also be called Sankarshana. As the son of Rohini He was known as Rohini-nandan and as the elder brother of Krishna He was also called Douji.

The form of Lord Balarama

Powerful Lord Balarama is sixteen years old, full of the luster of youth and has a fair complexion the color of crystal. He wears blue garments and a garland of forest flowers. His handsome hair is tied in a graceful topknot. Splendid earrings adorn His ears and His neck is splendidly decorated with garlands of flowers and strings of jewels. Splendid armlets and bracelets ornament Douji's graceful and very strong arms and His feet are decorated with splendid jeweled anklets.

Lord Balarama's beauty is enhanced by the earrings touching His cheeks. His face is decorated with tilaka made from musk, and His broad chest is ornamented with a garland of gunja. Balarama’s voice is very grave and His arms are very long, touching His thighs.

The splendor of Lord Balarama's transcendental form eclipses many millions of glistening rising moons, and the slightest scent of His boundless strength is sufficient to destroy many armies of demons. Although He knows the supernatural power of His younger brother, Krishna, still, out of love for Him, He never leaves Krishna alone in the forest even for a moment. Balarama is Sri Krishna's dearest friend and is a great reservoir of the nectar mellows of many kinds of transcendental pastimes.

Dhenukasura was a powerful demon who had assumed the form of an ass. With his demon friends he was occupying Talavana, one of the twelve forests of Vrindavana. Out of fear of these demons no one could approach Talavana and enjoy the numerous flowers and fruits in the forest. Balarama, induced by His cowherd friends, entered the forest desiring to kill the demons. He began shaking the fruit trees, making a big noise. Dhenuka, furious at the intrusion, attacked Balarama with his rear legs, but Balarama easily picked him up by his legs and whirled him around until he died. As the other demon friends of Dhenuka rushed to attack, Krishna and Balarama picked them up and threw them on trees, killing them. Soon the forest was free of all demons, and it appeared that the bent trees were being directed by Balarama to pay obeisances to Krishna.

Once when Krishna and Balarama were playing with the cowherd boys, a demon named Pralamba entered their midst, disguised as a cowherd boy. Understanding the invincible potency of Krishna, he instead decided to abduct Balarama. At the end of the game, as the losing party he was supposed to carry Balarama on his shoulders. Carrying the Lord on his shoulders he ran swiftly, but Balarama realizing the true identity of demon began to make himself heavier and heavier. Unable to bear the weight, the demon assumed his original form which was like a huge dark effulgent cloud, decorated with golden ornaments. Balarama then bought His fist down the head of the demon splitting it into two and causing him to give up his life.

As the elder brother of Krishna, Balarama was the object of His love and respect. Once when walking in the forest of Vrindavana, Krishna observed the trees bending down as if paying obeisances. He glorified the lotus feet of Balarama as being the object of devotion even for the demigods. He said that the trees, which were impersonalists in previous life times, witnessing the personal form of Balarama were now praying for His devotion. At other times when Balarama would get tired by playing, He would lie down the lap of one of the cowherd boys and Krishna would personally massage His feet, fan Him and give Him service. Such was the sweet reciprocation of love between Krishna and Balarama.

Once Lord Balarama, Who was at the time living in Dwarka, came back to stay in Vrindavana for two months. At this time He enjoyed pastimes with His gopi friends (who were different from the gopis of Krishna). Enjoying such pastimes on the bank of Yamuna at Rama-ghata, the Lord summoned Yamuna so that He could sport in the waters. When Yamuna devi did not respond. Lord Balarama took up His favorite weapon, His plow, and began to drag Yamuna in a hundred streams. Understanding the position of Balarama, Yamuna devi personally appeared and offered her obeisances to the Lord with many prayers in His glorification. Thus appeased the Lord entered and bathed in the waters of the river.

Samba, the darling son of Jambavati and Krishna, kidnapped Laksmana the daughter of Duryodhana from the assembly were she was supposed to choose her husband. The furious Kauravas after a prolonged fight, finally arrested Samba by sending in six of their greatest warriors. When the Yadavas heard of this they prepared for battle but Lord Balarama pacified them, preferring to find a peaceful solution. However when He requested the Kauravas to return Samba and Laksmana, the Kauravas responded by insulting Him and the Yadava dynasty. Understanding them to be ignorant in their false prestige, Balarama took His plow and began to drag Hastinapura into the Ganges. The terrified Kauravas now surrendered to the lotus feet of Balarama, begging for His mercy. They immediately returned Samba and Laksmana and had them married ceremoniously with many opulent gifts.

In Satya yuga there was a King named Raivata whose daughter Revati was excellent in all respects. Unable to find a match suitable for her, the king took her to the court of Brahma for his advise. After waiting for some time when the king met with Brahma, he was shocked to learn that in the short time he spent in the Brahmaloka, millions of years had already passed on Earth and at the time Dvapara yuga was concluding. However Lord Brahma informed King Raivata that present at this time was Lord Balarama Who was more than qualified to be the husband of Revati.

King Raivata returned and approached Balarama to accept Revati as His wife. However Revati belonged to an earlier yuga when people were much larger physically. So Lord Balarama placed His plow on her head until she shrunk to an appropriate size and accepted her as His wife.

In general Balarama was equally affectionate to both the Pandavas and the Kauravas. He accepted both Duryodhana and Bhima as His disciples in the art of mace-war. As a teacher He appreciated the superior technique of Duryodhana as opposed to the raw strength of Bhima. At the time of Mahabharata, He refused to take sides and instead went on an extended pilgrimage to the holy places. In the battle between Bhima and Duryodhana, He became angry at Bhima for killing Duryodhana by trickery, but was appeased by Sri Krishna.

Towards the end of Dvapara yuga thousands of sages assembled on the banks of Naimyasharana to perform a thousand year yajna in an effort to reverse the onset of Kali yuga. They appointed as their leader Romaharshana, one of the main disciple of Vyasadeva, who was also present when Sukadeva Goswami narrated Srimad Bhagavatam to King Parikshit.

When Lord Balarama entered the assembly, understanding Him to be the Supreme Personality of Godhead, all present rose to offer Him respect. However Romaharshana, proud at occupying the position of the leader did not get up. Lord Balarama could understand that even though Romaharshana was a an expert Vedantist, he had not yet realized these teachings. Considering him unqualified to lead the ceremony, Balarama touched him with a blade of grass causing him to die. He then instituted Suta, the son of Romaharshana as the leader of the assembly and continued with His pilgrimage.

Lord Balarama exemplifies the service attitude to Krishna. His only mission is to please Krishna by rendering service to Him, whether it is in the creation of the material worlds, maintaining the spiritual world or as His personal paraphernalia.

Lord Balarama is the eternal companion of Sri Krishna. He came as Lakshmana with Rama and later as Nityananda Prabhu with Caitanya Mahaprabhu. He is the original spiritual master, and any one desiring to make spiritual progress must first get the mercy of Lord Balarama.

All glories to Lord Balarama !!