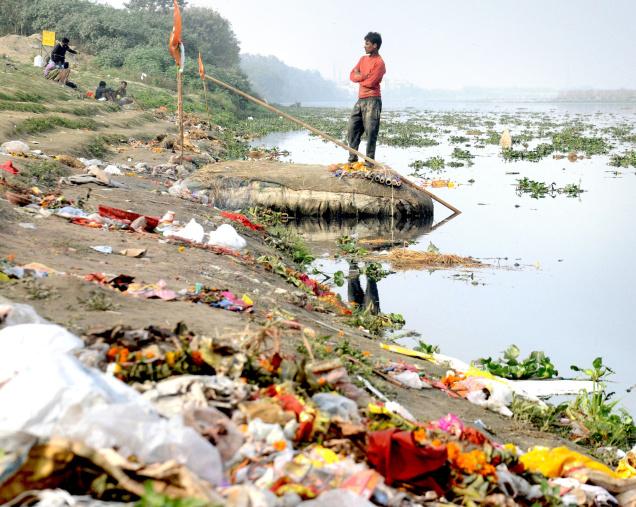 A new plan to clean Yamuna, including removal of solid waste and preventing sewage from flowing into the river, is likely to be announced by the Union and Delhi governments soon.

According to sources in the Delhi government, several measures to improve water quality and an overall plan to combat pollution in the Yamuna are likely to be revealed on Saturday. Union Water Resources Minister Uma Bharti and Delhi Water Minister and chairperson of the Delhi Jal Board Kapil Mishra have had several meetings, and are expected to announce a plan soon.

Mr. Mishra told The Hindu: “Things have been moving in a positive direction. Very soon you would see positive steps.”

The measures are likely to include a Rs.700-crore fund from the Centre for sewage treatment plants at Kondli and Rithala. A new ghat for Chhat prayers is likely to be developed at ITO, while a steamer to collect solid waste from the river is also expected to be announced. Apart from these, Ms. Bharti and Mr. Mishra could issue a joint statement on the plans for cleaning the river.

This isn’t the first time that the two governments have come together for the cause. Last year, the Centre and Delhi government had set up a special purpose vehicle (SPV) to execute projects to clean the Yamuna. Experts, however, say there has been no progress on the ground.

“No work has been done after the announcement of the SPV. Instead of announcing plans, the government should follow the National Green Tribunal’s judgment of last year that lays out a detailed blueprint,” said Manoj Misra, convenor of the Yamuna Jiye Abhiyaan.

Mr. Misra was referring to the NGT’s order titled ‘Maily se Nirmal Yamuna Revitalisation Project, 2017’, which issued strict measures for curbing pollution in the river. Among them was a total ban on construction on the floodplains, and the setting up of 15 mini-sewage treatment plants.

Over the years, both the Centre and Delhi government have spent thousands of crores on cleaning the river. Despite this, Delhi’s 18 major drains drop 3,500 million litres of water into the river every day.