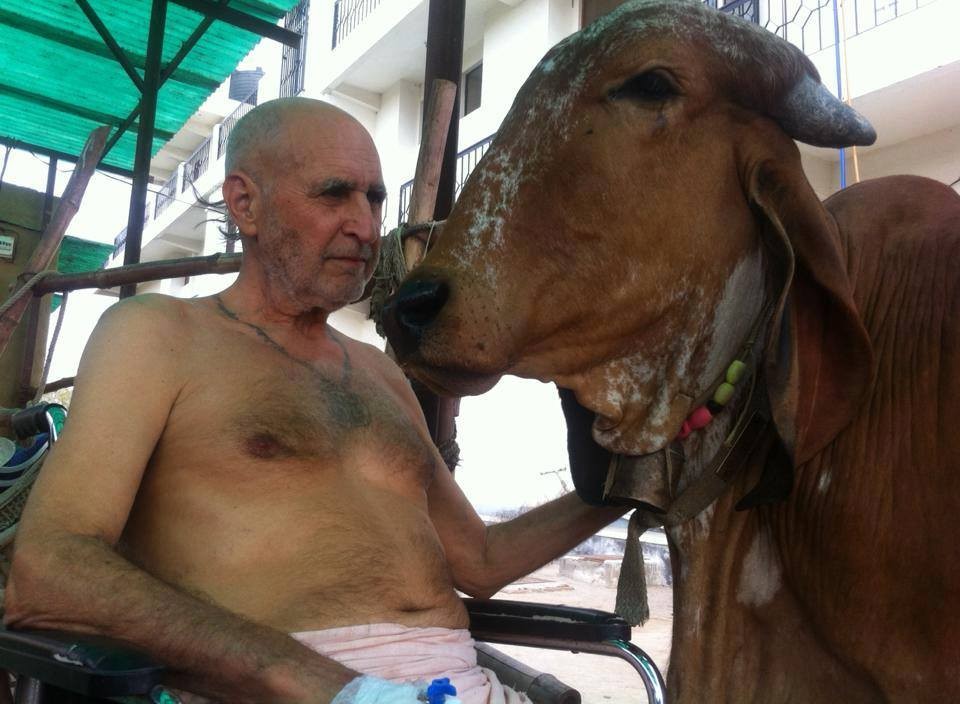 When in Vraja I was informed that Kurma Rupa Prabhu was quickly leaving his body due to cancer. So I walked to his room one evening and we spent time together.

Last month he had his gall bladder removed. I saw a picture on Facebook after the operation and his hand was completely filled with gall stones.

When the doctors performed that operation they detected a tumour at the bottom of his stomach which was blocking passage for the stomach to the small intestine.

It was biopsied and declared to be benign. So the doctors left it and made a small slit in his stomach to connect the stomach to his intestine that he could begin to eat and eliminate.

A few weeks ago he began to experience burning pain in his stomach. He tried all varieties of antacids to no avail. Thus again he went to Delhi to see his doctors.

The burning was caused by bile .. and lots of it.

Since his gall bladder operation the liver had gone into overdrive and could not deal with the creation of bile. The doctors placed a catheter in his liver and the first night night drained 4.5 litres of bile. Everyday since there has been at least a litre drained.

The doctors also realised the tumour had expanded greatly, again biopsied, the doctors returned the verdict of a stage 4 cancer tumour.

They wanted to reopen Kurma Rupa prabhu but he said no .. take me back to Vrindavan to die.
While I was with him he was very weak but very focused.

He was salivating all the time and had to spit regularly. He said the bile was causing him to have a very horrible alkaline tasting saliva.
We spoke.
He said initially he was worried .. but now he had no fear.
We both remembered when we were young in Vrindavan. Whenever we were faced by danger, gundas, thieves, or temple presidents our mantra was,
“Look, I came to Vrindavan to die .. so .. if you want to kill me do it now.”
He softly said that during rare moments in his life of sadhana bhakti, when Krishna had blessed him with His causeless drops of grace, he had seen that his only aspiration was to be with Gopal, helping him to tend to the cows in Vraja.
I mentioned that when I had first spoken to Srila Akinchana Krishna dasa Babaji Maharaja that I told him,
“Babaji Maharaja, I am so blessed to be in Vrindavan.”
Babaji Maharaja looked at me and said, “why are you blessed?”
I replied, “I am blessed because in this Vraja I can see two merciful paramhamsa vaisnavas, you .. and my guru maharaja.”
He looked at me very intensely, yet very kindly, and relied,
“Do you really want to know why you are blessed here in Vrindavan?
You are blessed …
because just outside these windows Sri Krishna and Balaram are walking and playing with Their cows,
and the dust from Their divine feet, and the dust of the divine feet of Their cows, is rising up, and covering your entire body,
and this is your greatest treasure of life.”
Then Babaji Maharaja fell silent.
When I told that to Kurma Rupa he looked down in his deep and serious way,
and replied,
“my only hope and desire is to serve Gopal as He is with his cows.”
Then he said,
“some people think in a beautiful way of service to Sri Radha and Her associates.
I give them my deepest respects .. but my only hope and desire is to be with Gopal and serve Him and His cows.”
He said that he deeply admired how I was always travelling and sharing harinama.
I replied that I love Vrindavan, and if I were not unqualified, I would always remain here. But as I am not qualified, I can only stay for a few days before I am again sent away.
But I said his life was most blessed life because he has spent at least 30 years in Vraja, and everyday fixed in service.
He then said that he felt bad that he did not travel and preach. He said that if he made it through this crisis he may go west somewhere in the west and attempt to start a cow care program.
Then I became very strong and told him,
“No !! If you do recover stay here and serve your cows with more and more love and affection.
But I order you, never, never, never leave Vrindavan.
Never leave …
Until that blessed moment arrives when Gopal comes to take you from this Vrindavan to the other Vrindavan, welcomes you with tears, embraces you with love, swears to you that you that He will never allow you to leave again, and then, introduces you to Sudama, Subala, Madhumangala, and you both walk, arm in arm, in the mist of 900,000 cows.
He said, “I accept your instruction as an order. I will never leave Vrindavan.”
The next day Kurma Rupa returned to Care For Cows.
He told me that he wanted to go back there as soon as he could. he said he wanted to hear the cows, smell the cows, breathe the dust of the cows.
He looked at me seriously and said;
“Maharaja, If you ever have a problem in life .. serve a cow with love .. then, all your problems will dissipate by the grace of Gopal and you’ll be blessed with bhakti.”
I held his hand tight and begged him to forgive me if I’d ever offended him.
I begged him to give me blessings to attain bhakti.
And, I deeply thanked him for his full life of sacrifice to Srila Prabhupada’s mission, harimana, vaisnavas, and his glorious and selfless love for cows.
We embraced and parted.
Just a few minutes ago Dharmatma Prabhu called me and said that Kurma Rupa prabhu’s situation has deteriorated.
Today may be his last day in this section of Vrindavan.
My request is that everyone offer a prayer to Gopal for this selfless servant,
Kurma Rupa Prabhu. May Sri Gopal quickly come, give Kurma Rupa the sweet embrace that he so merits, and deliver him to the planet of the cows.
My realisation was that as youngsters we had souls like Prabhupada, Babaji Maharaja, Shridhar Maharaja and other venerable vaisnavas that we would associate and beg mercy from.
Venerable vaisnavas like Kurma Rupa Prabhu are the saintly monarchs and pure devotees of this age.
Kurma Rupa Prabhu Ki Jai !!
Patita Pavana Srila Prabhupada Ki Jai !!
Harinama Sankirtan Ki Jai !!
Jai Jai Sri Radhe … Shyam !!