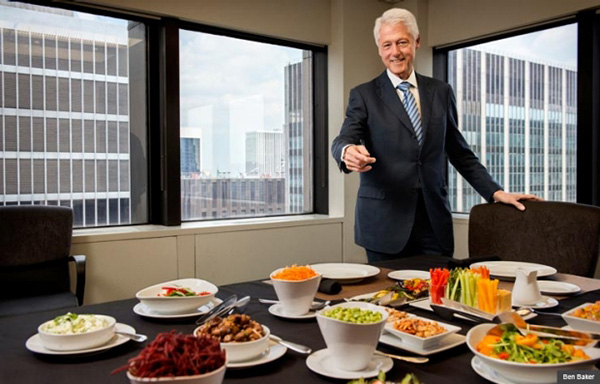 When Bill Clinton invited me to lunch in May, I knew better than to expect fried catfish or barbecued ribs. The former president is now a devoted vegan, meaning no meat, fish or dairy products, and he has pursued a healthier way of life for more than three years. While I figured our lunch menu might be bland, that would be a small price to pay for private time with a world leader who is anything but.

As it happens, the fit, trim and sharply attired Clinton, whom I've come to know well during more than two decades covering his career, is his usual gregarious, charismatic self. But a bland menu? Not even close.

Get Ready, Get Set — Go Vegan!

The luncheon banquet gives a whole new meaning to the dreaded cliché "Eat your vegetables." And this is exactly what Clinton, who is taking on America's obesity epidemic with the same passionate commitment he brought to the presidency, wants.

As I gawk, he smiles. "This looks pretty good, doesn't it?" Clinton asks. It looks better than good. We sit down and with great relish start passing plates back and forth. He favored the quinoa; I loved the roasted cauliflower and snow peas; and we both liked the beans.

The road to a healthier diet

At age 66, Bill Clinton still travels and works at a pace that completely exhausts staffers who are two or three decades younger. Yet, while coping with heart disease and the usual complaints of aging, he has managed to change his diet drastically, lose more than 30 pounds and keep the weight off. If he can do all that, then maybe there's hope for the rest of us baby boomers — and Americans of all ages — whose eating and exercise habits (and medical expenses) worry him a lot.

I first noticed a change in Clinton's eating habits when we were in Capetown, South Africa, back in July 2010. (I have been covering his extraordinary postpresidential career since 2005, interviewing him frequently and traveling with him across Africa, Europe and the Mideast, as well as the United States.) We were all preparing to dig into a tempting dinner sent up to the former president's suite from a very fine restaurant in the hotel. Sitting down next to him, I glanced at his plate and saw none of the steak, shrimp, fish or chicken on the buffet — just a tangle of green lo mein noodles and a pile of broccoli.

"Is that all you're eating?" I blurted.

"That's right," he replied. "I've stopped eating meat, cheese, milk, even fish. No dairy at all." He smiled and yanked on his waistband. "I've lost more than 20 pounds so far, aiming for about 30 before Chelsea's wedding. And I have so much more energy now! I feel great." (He achieved his ideal weight in time for his daughter's marriage to Marc Mezvinsky on July 31, 2010.)

Clinton traces his decision to change back to the morning in February 2010 when he woke up looking pale and feeling tired. His cardiologist quickly brought him into New York-Presbyterian Hospital, where he underwent emergency surgery to insert a pair of stents. One of his veins had given out, a frequent complication following the quadruple-bypass surgery he had undergone in 2004.

At a subsequent press conference, Clinton recalls, his doctors tried "to reassure the public that I wasn't on the verge of death, and so they said, you know, this is actually fairly normal." Soon after, he received a "blistering" email from Dean Ornish, M.D., the renowned diet and heart disease expert.

"Yeah, it's normal," wrote Ornish, an old friend, "because fools like you don't eat like you should."

"I just decided that I was the high-risk person, and I didn't want to fool with this anymore. And I wanted to live to be a grandfather. So I decided to pick the diet that I thought would maximize my chances of long-term survival."

Prodded into action, Clinton started by rereading Dr. Dean Ornish's Program for Reversing Heart Disease, which urges a strict, low-fat, plant-based regimen, along with two books that were, if possible, even more militantly vegan: Prevent and Reverse Heart Disease, by Caldwell Esselstyn, M.D., and The China Study, by Cornell biochemist T. Colin Campbell, Ph.D. (When I suffered a heart attack in late November 2010, Clinton sent me all three books.)

"I just decided that I was the high-risk person, and I didn't want to fool with this anymore. And I wanted to live to be a grandfather," says Clinton. "So I decided to pick the diet that I thought would maximize my chances of long-term survival."