The civilization of Ancient Egypt occurred in a past so remote that today it seems mystical. The pyramids and other temples, with their hieroglyphics depicting a flourishing civilization, have a mysterious, almost magical appeal. It seems inconceivable that people of an advanced society could have walked those ancient streets.

Now a civilization has been uncovered that would have appeared just as ancient to the people who built the pyramids as the pyramids seem to us.

According to marine scientists in India, archaeological remains of this lost city have been discovered 36 metres (120 feet) underwater in the Gulf of Cambay off the western coast of India. And carbon dating says that they are 9,500 years old.

This news completely contradicts the position of most Western historians and archaeologists, who have always rejected, ignored, or suppressed evidence of an older view of mankind's existence on planet Earth. Human civilization is now provably much more ancient than many have believed.

According to the BBC's Tom Housden, reporting on the Cambay find:

The vast city — which is five miles long and two miles wide — is believed to predate the oldest known remains in the subcontinent by more than 5,000 years.

The site was discovered by chance last year by oceanographers from India's National Institute of Ocean Technology, who were conducting a survey of pollution.

Using sidescan sonar, which sends a beam of sound waves down to the bottom of the ocean, they identified huge geometrical structures at a depth of 120 feet.

Debris recovered from the site — including construction material, pottery, sections of walls, beads, sculpture, and human bones and teeth — has been carbon dated and found to be nearly 9,500 years old (BBC article).

Several reports confirm this estimate. Housden added, "The whole model of the origins of civilisation will have to be remade from scratch."

The BBC article tells us that the remains of this ancient city stand upon "enormous foundations." Marine archaeologists discovered them with a technology known as "sub-bottom profiling."

Author and filmmaker Graham Hancock, an authority on archaeological investigations of ancient civilizations, reportedly said that the evidence was compelling. For example, he said that the oceanographers had found two large blocks that were larger than anything that's ever been found. "Cities on this scale," Hancock told BBC Online, "are not known in the archaeological record until roughly 4,500 years ago when the first big cities begin to appear in Mesopotamia.

Theorists are postulating that the area where this city exists was submerged when the ice caps melted at the end of the last Ice Age.

Hancock says on his website, "Marine scientists in India announced they had sonar images of square and rectangular shapes about 130 feet down off the northwestern coast of India in the Gulf of Khambhat (Cambay). . . . [There are] sonar shapes with 90-degree angles. The Indian Minister of Science and Technology ordered that the site be dredged. What was found has surprised archaeologists around the world"

Linda Moulton Howe, who investigates occurrences of this type worldwide, interviewed Michael Cremo about this new discovery. Cremo is a researcher and author of the book Forbidden Archaeology. Cremo, Howe said, has visited India and attended local meetings about the Cambay site.

"Within the past few months," Cremo told her, "the engineers began some dredging operations there and they pulled up human fossil bones, fossil wood, stone tools, pieces of pottery, and many other things that indicated that it indeed was a human habitation site that they had. And they were able to do more intensive sonar work there and were able to identify more structures. They appeared to have been laid out on the bank of a river that had been flowing from the Indian subcontinent out into that area." 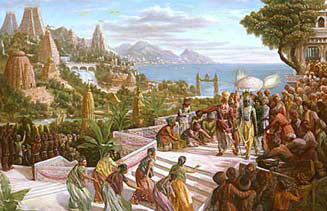 Now, if it further happens that additional research is able to identify the culture of the people who lived in that city that's now underwater — if it turns out they are a Vedic people, which I think is quite probable given the location of this off the coast of India — I think that would radically change the whole picture of Indian history which has basically been written by Western archaeologists.