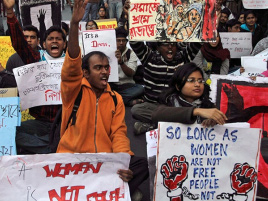 Indian authorities added murder charges Saturday for suspects in the brutal gang rape that led to the death of a 23-year-old woman and sent outraged protesters to the streets.

Six people, including a minor and a bus driver, have been arrested in connection with the rape that occurred in New Delhi this month.

Throngs of people have protested for days, demanding more protection for women and punishment for those behind the assault.

The woman was airlifted to Singapore earlier this week after she was treated for injuries in a New Delhi hospital.

The woman had been in "extremely critical condition" since her arrival Thursday and took a turn for the worse, said Dr. Kelvin Loh, chief executive officer at Mount Elizabeth Hospital.

"She had suffered from severe organ failure following serious injuries to her body and brain," Loh said. "She was courageous in fighting for her life for so long against the odds, but the trauma to her body was too severe for her to overcome."

The victim's body was returned to India, where it was cremated Sunday in a private funeral, Home Ministry spokesman K.S. Dhatwalia said.

The U.S. Embassy in New Delhi expressed its condolences Saturday.

"As we honor the memory of this brave young woman, we also recommit ourselves to changing attitudes and ending all forms of gender-based violence, which plagues every country in the world."