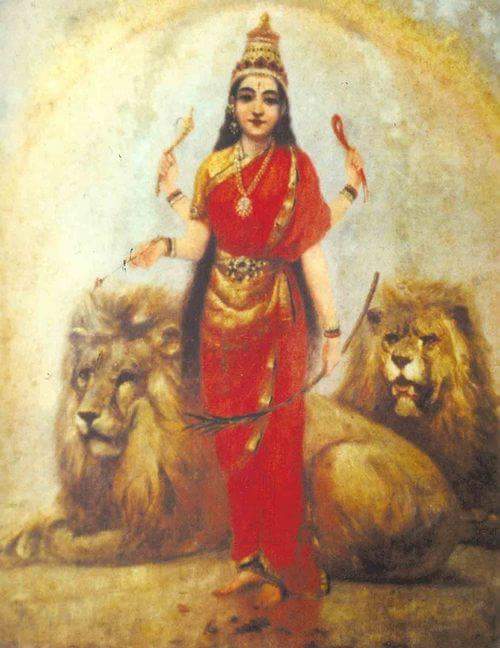 The opposition sometimes raise this question “so are you all the worshipers of the female personification of Divine energy” (Shakta)? The answer is “yes” we are under the shelter of the personification of spiritual energy Srimati Radharani. We are practicing devotions entirely under Her direction. We can compare ourselves in this sense as Shaktas and are therefore non-different from the devotees (Vaishnavas). On the contrary, those not taking shelter of this spiritual potency but only have attraction for the material aspect are not considered devotees but are simply sense enjoyers. In Narada Pancaratra, Durga Devi says: “I am Your loving partner in your delightful Vrndavana pastimes in the form of Your internal pleasure potency”. We perceive from the statement of Durga Devi that this energy is non-dual. In the transcendental feature, this energy is present as Srimati Radhika and in the material form manifests as the material energy. The question is sometimes raised by the opposition that the Smarta Brahmins say that the energy of Lord Siva is the foremost energy (shakti). Why is this?

Srila Bhaktivinoda replies. The material nature is composed of the three modes: goodness, passion and ignorance. The brahmins who are oriented in goodness worship the demigod in that material mode of goodness; those in passion worship the demigod in passion while those in the mode of ignorance worship “material nature” a knowledge. In actual fact, there is no separate energy called material energy and “Maya” is just a transformation of the spiritual potency. It is but the shadow energy of the pure spiritual potency of the Lord. The material energy is mainly responsible for the conditioning of the living entity as a form of punishment due to his forgetfulness of his relationship with the Supreme Lord. The living entity, on regaining his lost relationship with the Lord becomes surcharged with knowledge and bliss. However, if the material energy becomes predominant, it makes the living entities in their forgetfulness refer to this illusory energy (Maya) as all in all. This explains the worship of material nature (shakta). Gradually, the bewildered living entity, by long period of accumulation of pious merit, can be impelled into the position of acquiring divine knowledge (Vaishnava).

The question is raised again: do we sometimes compare Durga Devi to be a transcendental associate within the precincts of Gokula? The answer given by Srila Bhaktivinoda Thakura is:- yes! In the spiritual world Durga Devi is called YogaMaya. She is present as the seed-form in the changes of the spiritual energy. For this reason, she considers herself non-different from the original internal energy of the spiritual world. YogaMaya, also can be transformed into material energy, or shadow potency. The material goddess Durga Devi is the servitor of the spiritual aspect of the same Durga Devi. The spiritual Durga Devi plays an important part in Lord Krishna’s variegated pastimes as YogaMaya. The Srimad Bhagavatam (10/29/20) describes how the Lord takes shelter of His own internal potency in the love-sports of the gopis. (YogaMaya anupasritah). The internal energy which nourishes such divine pastimes may look like ignorance but in reality is an essential ingredient in the blossoming of these transcendental sports.