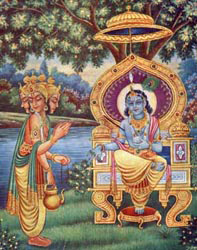 Krishna is God, the Supreme Personality of Godhead. This fact is stated and corroborated in the Vedic scriptures and by various authorities. Lord Brahma in Brahma Samhita says, “Krishna who is known as Govinda is the Supreme Godhead. He has an eternal blissful spiritual body. He is the origin of all. He has no other origin and He is the prime cause of all causes” (BS 5.1). In the Bhagavata Purana Krishna becomes the chief object of devotion. After describing various incarnations of the Lord such as Rama, Balarama, Vamana, Nrsimha, and Vishnu, Srila Sukadeva Goswami states, “All of the above mentioned incarnations are either plenary portions or portions of the plenary portions of the Lord, but Lord Krishna is the original Personality of Godhead” (SB 1.3.28).

Lord Shiva in Gita Mahatmya, states that “only one God – Krishna, the son of Devaki” (Verse 7). In the Padma Purana it is stated, “By scrutinizingly reviewing all the revealed scriptures and judging them again and again, it is now concluded that Lord Narayana is the Supreme Absolute Truth, and thus He alone should be worshipped”. Similarly it is said in the Skanda Purana, “In the material world, which is full of darkness and dangers, combined with birth and death and full of different anxieties, the only way to get out of the great entanglement is to accept loving transcendental devotional service to Lord Vasudeva. This is accepted by all classes of philosophers”.

The position of Krishna as God is confirmed by great personalities like Narada, Asita, Devala, Vyasa, Parasara, Brahma and Shiva. Finally Krishna Himself confirms this fact in the Bhagavad-gita to His friend and devotee, Arjuna. He clearly says that He is “the Supreme Lord of all planets and demigods” (BG 5.29), that “there is no truth superior to Me” (BG 7.7) and – “I am the source of all spiritual and material worlds. Everything emanates from Me” (BG 10.8).

What is the position of Krishna? 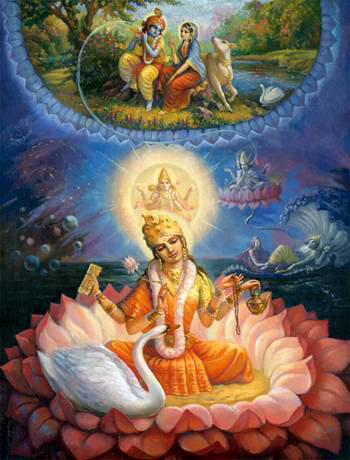 As God, there is no one equal to or greater than Krishna. He is the original, unborn, eternal person, the most ancient, completely independent, and the cause of all causes. Parasara Muni, the father of Srila Vyasadeva and a great scholar who had himself held the position of Vyasa in a previous kalpa, very nicely defines the position of Bhagavan (God) as one Who is complete in six kinds of opulence namely – wisdom, beauty, fame, power, wealth and renunciation. While there are many great personalities who are very famous or very wealthy, only Krishna as God is replete in all six opulence.

The scriptures not only give us the unique position of Krishna but also give us a detailed description of all His aspects. They tell us that above this temporary material universe is an eternal spiritual world called Vaikuntha, and Krishna lives in the topmost planet of this universe called Goloka Vrindavana which is full of palaces made of touch-stone (cintamani), with trees that are capable of fulfilling all desires (kalpa-vraksha) and cows that are called Surabhi.

Here Krishna eternally resides, served by hundreds and thousands of goddesses of fortune. He sports with His most confidential and intimate devotees, headed by Srimati Radharani. He has a form just like us but His body is spiritual and thus eternal. His complexion is dark-blue, like that of a rain-filled cloud and His eyes are like lotus petals. He is ever youthful, full of bliss and His beauty excels that of thousands of cupids. He likes to play the flute, He sports a crown with a peacock feather and He is adorned by the exquisite kastuba jewel.

What is Krishna avatar?

In Chaitanya-charitamrita (2.20.263-264) it is stated that the “avatar, or incarnation of Godhead, descends from the kingdom of God for creating and maintaining the material manifestation. And the particular form of the Personality of Godhead who so descends is called an incarnation, or avatar. Such incarnations are situated in the spiritual world, the kingdom of God. When They descend to the material creation, They assume the name avatar.”

The Srimad Bhagavatam states that there are countless incarnations just like the waves of the oceans. They fall in various categories like lila (pastime), yuga (period of yuga), manavantara (period of Manu), purusa (Vishnu expansions) and shaktivesa (empowered). These avatars perform various pastimes based on the time, place and circumstances, but their purpose is always the same – “to attract the conditioned souls back to their eternal spiritual abode”.

However only once in a day of Lord Brahma (which lasts for 4.32 billion of our years), does Krishna descend in His original form, as the avataree, the cause of all avatars. When Krishna appears all the incarnations join with Him. The Supreme Personality of Godhead is the complete whole and all the plenary portions and incarnations always live with Him. So when Krishna appeared, Lord Vishnu was always with Him, and while Krishna enjoyed His pastimes in Vrindavan, the killing of the demons was actually carried out by the His Vishnu portion. Since Krishna eternally resides in Vrindavan, when He left Vrindavan at the age of ten, it was His Vasudeva expansion that actually left. 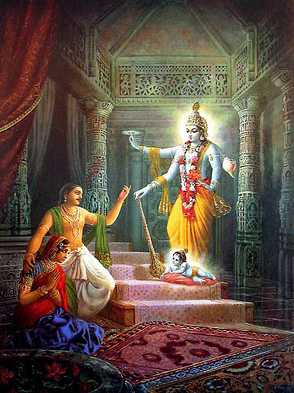 In the era of the Svayambhuva Manu, prajapati Sutapa and his wife Prsni were instructed by Lord Brahma to have progeny. They performed severe austerities for twelve thousand years of the demigods to have the Lord as their child. Pleased by their austerities the Lord appeared and granted them this benediction. Since He gave them this benediction three times, in Satya-yuga He first appeared as the son of Prsni and Sutapa and was called Prsnigarba. In Treta-yuga they were Aditi and Kasyapa Muni and the Lord appeared as Vamanadeva. Finally in the Dvapara yuga, Krishna in His original form, appeared as the child of Devaki and Vasudeva.

Krishna appeared specifically on the request of Bhudevi, the presiding deity of the Earth planet. Distressed by the burden of many demons who had appeared as powerful Kshatriyas and were ruling the planet impiously, she assumed the form of a cow and pleaded to Lord Brahma for help. Lord Brahma with all the demigods prayed to Lord Vishnu in Svetadvipa by chanting the Purusa-sukta prayers. At this time the Lord informed Brahma that in order to establish religiosity and destroy evil, He would soon appear as His original Self. In the meantime the various demigods were instructed to take birth in various families in the Yadu dynasty and prepare for the appearance of the Lord.

Historically, Lord Krishna appeared in the Dvapara yuga, on the midnight of the 8th day of the dark half of the month of Sravan. This corresponds to July 19th in the year 3228 BC. He exhibited His pastimes for a little over 125 years and disappeared on February 18th 3102 BC on the new moon night of Phalgun. His departure marks the beginning of the current age of corruption known as Kali.

The great scholar Srila Vishvanatha Chakravarti neatly outlines Lord Krishna’s activities in this way. He was born in Mathura in the prison cell of Kamsa and carried to Gokul. The first three years and four months were spent in Gokula, then equal lengths of time in Vrindavan and Nandagram. At the age of eleven He left Vrindavan for Mathura where He lived for eighteen years and four months, and finally ninety-six years and eight months in Dvaraka totaling about 126 years of manifest pastimes. At the time of Mahabharata, when Krishna spoke the Bhagavad-gita, He was about ninety years of age.

The tenth canto of Srimad Bhagavatam describes the activities and transcendental pastimes of Sri Krishna. They are also described in the epic Mahabharata, specially in the Bhishma parva which also contains the Bhagavad-gita. The pastimes of Krishna appeal to the liberated souls, those that are trying to get liberated and also to the gross materialists.

The pastimes of Sri Krishna, known as Krishna-katha fall into two categories. Words spoken by Krishna, as the Bhagavad-gita, and words spoken about Krishna, as in the Srimad Bhagavatam. Souls in the liberated stage derive great pleasure in relishing anything and everything related to Krishna. For those that are trying to be liberated, Krishna-katha makes their path of liberation very clear. By studying the Gita one becomes fully conscious of the position of Sri Krishna; and when one is situated at the lotus feet of the Lord, he understands the narration’s of Krishna as described in the Srimad Bhagavatam.

Even the gross materialists are attracted by the pleasure pastimes of Krishna with the Gopis and His wives. Even though the loving affairs of Krishna have nothing to do with the gross, mundane sex affairs, they attract the people engrossed in sense-gratification and gradually elevate them to higher levels of spirituality. 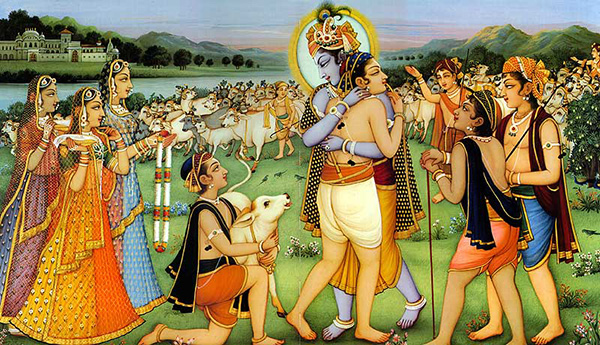 Krishna is so merciful that He not only helps His devotees, but also those who are envious of Him. Krishna destroys evil by providing them with an opportunity to take up devotion.

On the greatly auspicious day of Krishna-Janamashtami, let us all pray to Sri Krishna for a drop of His causeless mercy, for only that alone is sufficient to take us out from this material word, back home, back to Godhead.