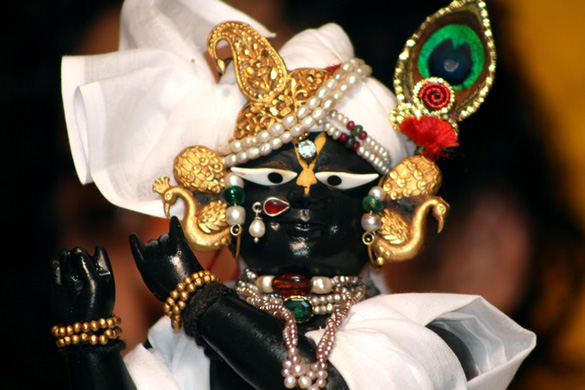 May 17th Vaisakha Purnima was the auspicious appearance day of the self-manifest Deity, Sri Radharaman Lalji, one of the most important and beloved Deities of Vrindavan who was served by Gopala Bhatta Goswami. It was celebrated with great pomp and ceremony with an incredible abhisheka with more than 2,000 liters of milk! There was also pancagavya, milk, ghee, yogurt, cowdung, cow urine, and pancamrita, milk, yogurt, honey, ghee, and sugarcane juice, along with many other auspicious ingredients such as Keshar jal, ratna jal, aguru jal, chandan jal, water from the Seven Sacred rivers and many other substances. Below, we present a brief history of his appearance.

When Gopala Bhatta heard of the disappearance of Mahaprabhu, he felt intense separation from the Lord, having associated with him only in his childhood. One night Lord Caitanya appeared in a dream and told him, “If you want my darshana, make a pilgrimage to Nepal.” In Nepal, Gopala Bhatta visited the river Gandaki. After taking his bath he filled his water pot and was surprised to see that some Shalagrama-shilas had entered it. Emptying his pot, he filled it again, only to find the shilas had re-entered his water pot. Again he emptied his pot, and when he filled it for a third time he found that now twelve Shalagrama-shilas were there. Thinking this must be the mercy of the Lord, he decided to bring those shilas with him to Vrindavana. – One day after returning to Vrindavana, a wealthy devotee approached Gopala Bhatta Goswami with dresses and ornaments for his Deity. Gopala Bhatta told him that as he was only worshiping a shalagrama-shila, it would be better to give to someone else who was worshiping a Deity and could use them. It happened to be Narasimha-caturdast and thinking deeply on this incident Gopala Bhatta remembered how Lord Narasimha deva had manifested from a stone pillar. He then began to prey to the Lord, “O Lord, you are very merciful and fulfil the desires of your devotees. I wish to serve you in your full form.” In esctasy he read the chapters of Shrimad Bhagvatam about Lord Narasimha deva’s pastimes, and then took rest. In the morning when he awoke, he found that one of the twelve Shalagramas, the Damodara-shila, had manifested as Shri Radharamana (vide picture). The time of this writing, 2011, is the 469th anniversary of his appearance.

To see photos of the abhisheka and Sringara Darshan follow the link below: