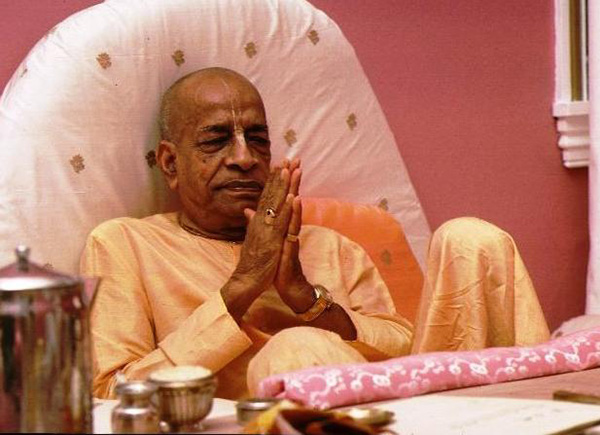 ISKCON Cinema, in association with the Vedic Community Foundation (VCF) will produce the Documentary Feature Film, ACHARYA—One Who Teaches by Example; a 90 minute, broadcast quality, HDTV production depicting the life and teachings of Srila Prabhupada. Through archival films, interviews, locations shoots and re-enactments, the film will depict the incredible story of one devoted soul’s mission to re-spiritualize humanity. The movement he started in 1965 continues to thrive worldwide 36 years after his disappearance.

“Yoga, vegetarianism, reincarnation, karma and Hare Krishna have become household words; all were introduced by Srila Prabhupada in the 1960‘s when very few knew what they meant. With the recent success of the HBO production, George Harrison: Living in the Material World (George Harrison was an avid admirer of the Swami) it is clear that young truth seekers worldwide continue to look for answers to life’s mysteries,” said John Griesser (Yadubara das) the film’s Executive Producer. “Srila Prabhupada has given answers and solutions coming from an age old tradition that have stood the test of time. His story and teachings will be of riveting interest to people who are searching for a positive option in their lives and in the world. In 1983, my wife Visakha devi and I produced the first documentary film on Srila Prabhupada entitled ‘Your Ever Well Wisher.’ That production was very successful with the devotional community. Now we need a film for the public.”

“In a world troubled by social, environmental, racial and religious strife, there is an urgent need for an updated, revised film on Srila Prabhupada with language and imagery appropriate for 21st century viewers. To produce ACHARYA, we will join forces with media professionals in the Washington DC area. Financial backing will come from supporters, followers and well-wishers around the world who have witnessed and experienced the positive influence of Srila Prabhupada’s teachings,” stated John.

The film will re-create through archival footage major historical events that shaped Srila Prabhupada’s life and mission: Gandhi’s non-violence movement, the partition of India and Pakistan and the widespread social unrest in America due to Vietnam War protests and a dissatisfied youth. Srila Prabhupada entered into an America torn apart with unrest and strife. How he attracted the alienated youth is a miracle in itself and will be examined through interviews with those whose lives were impacted forever.

A handpicked, professional crew will travel throughout the US, Europe, and India conducting interviews, filming sites relevant to Srila Prabhupada’s story and creating re-enactments. “In a short period of 12 years, what Srila Prabhupada accomplished was superhuman. This film should prove to be a real eye opener for moviegoers and audiences around the world,” said Krishna Gopal das, Executive Director of VCF. The movie is a not-for-profit production assisted by the VCF which will help the producers raise funds for production costs through donations. The deadline for release is September, 2015, the 50th anniversary of Srila Prabhupada’s arrival on the shores of America. The film will be offered to major networks such as Showtime, Discovery, the History Channel and other quality network channels worldwide.