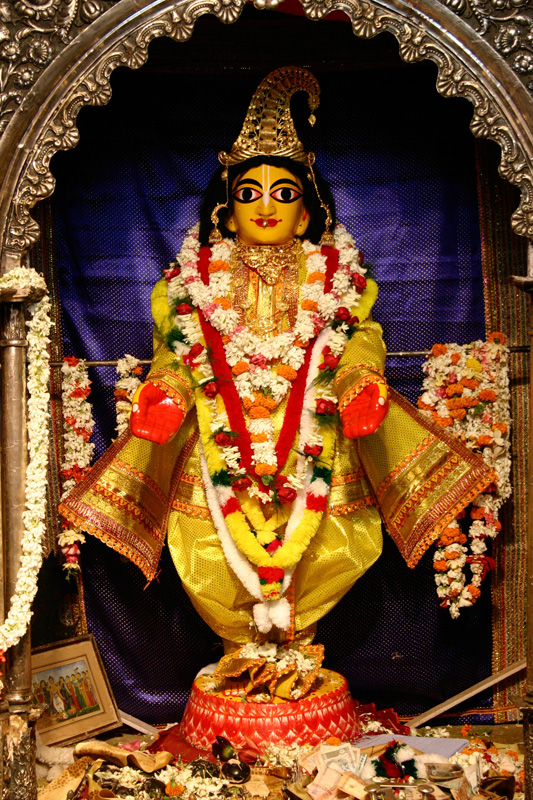 "Visnupriya is the personification of devotional service. She appeared during the advent of Sri Gaura to assist him in preaching the holy names of the Lord."

Q. It seems that later followers of Jesus, principally those who had never personally met him, deified him in a way that was not done during his lifetime and was not explicitly taught by him. Has the same thing happened with Caitanya Mahaprabhu? In Gaudiya Vaisnavism the Caitanya-caritamrita by Krsnadasa Kaviraja is the lens through which Mahaprabhu is viewed, but do all those mentioned in the book share its vision? Does Jiva Goswami speak about Mahaprabhu's ontological status in the same way as Krsnadasa Kaviraja?

A. It is abundantly clear from the writing of the associates of Sri Caitanya that Krsnadasa Kaviraja, although coming a generation later, has represented not his own ideas regarding the divinity of Sri Caitanya but those of the immediate disciples of Sri Caitanya. Raghunatha dasa Goswami, who lived for many years in the personal association of Sri Caitanya writes in his Saci-suta Astakam, "Will Lord Hari, who upon seeing his own incomparable sweetness in a mirror in Vraja and desiring to become like his dearest friend Radha manifested an incomparable golden form and took birth in Bengal as the son of Saci, again walk on the pathway of my eyes?" In this prayer Raghunatha dasa Goswami identifies the son of Saci, Sri Caitanya, with Krsna (Hari) and furthermore with the sentiment and complexion of Radha. Dasa Goswami's siksa guru, Svarupa Damodara, who was the personal secretary of Sri Caitanya in Puri, also wrote about Sri Caitanya's divinity and identification with Radha's bhava, and a significant verse of his has been included in Sri Krsnadasa's text as one among four verses through which Sri Krsnadasa seeks to establish the theology of Gaudiya Vaisnavism with regard to Sri Caitanya's divinity and devotion in the ecstasy of Radha.

In this verse Sri Svarupa writes, "Radha and Krsna's love is a transformation of hladini-sakti. On earth, the one, Krsna, has become two, Radha and Krsna, eternally. Then, as Gaurasundara, these two formed a dynamic unity. Pranam to that Krsna endowed with Radha's countenance and personality." It is principally from the notes of these two, Svarupa Damodara and Raghunatha dasa Goswami, that Sri Krsnadasa has developed his treatise. It is also clear that his Sri Caitanya-caritamrta draws heavily on the earlier works of Rupa, Sanatana, and Sri Jiva Goswamis. Texts such as Bhakti-rasamrta-sindhu, Laghu-bhagavatamrta, Hari-bhakti-vilasa, Sat-sandarbha, and the Vaisnava-tosani Bhagavata commentary are well represented in his work. Regarding Sri Jiva Goswami's opinion, we find this in his Sat-sandarbha, perhaps the most important text in terms of Gaudiya siddhanta and the tradition's understanding of the Srimad Bhagavatam, so dear to Sri Caitanya. Jiva Goswami begins this sixfold treatise with a citation from the Srimad Bhagavatam that speaks of Sri Caitanya's divinity:

"In Kali-yuga, those who possess very fine theistic intelligence worship Sri Krsna who has appeared in disguise as Sri Krsna Caitanya . . . "

Finally, regarding the authority of Caitanya-caritamrta, Srila Sridhara Deva Goswami emphatically has this to say, "The Caitanya-caritamrta, the gift of Kaviraja Goswami, is the highest wealth of our sampradaya. With great authenticity we can rely on Caitanya-caritamrta on every point. Every part of Caitanya-caritamrta represents Mahaprabhu completely, because the source is Rupa-Sanatana and Raghunatha. They all came into direct contact with Mahaprabhu and were inspired by him. He empowered Rupa Goswami to reveal, in a scientific and exhaustive way, the shastras of divine love–the love of Vrindavana. Mahaprabhu said to Svarupa Damodara, 'I have given my all to him–you also grace him. He (Sri Rupa Goswami) is the fittest person to deal with this science of divine love. You can put full confidence in him.'

"First was Rupa Goswami and then there was Raghunatha dasa Goswami, who also had direct contact with Mahaprabhu. Kaviraja Goswami was a disciple of Raghunatha dasa Goswami and he came in close association with Rupa-Sanatana and got their blessings. So what Kaviraja Goswami has given is unparalleled. Our Guru Maharaja (Bhaktisiddhanta Saraswati Thakura) wrote in a letter that every part of Caitanya-caritamrta can be taken as fully bona fide, both from the historical and ontological point of view." (Encounters with Divinity)

Thus it is the insights of the direct disciples of Sri Caitanya that are represented in Sri Caitanya-caritamrta and these insights remain the heart and soul of Gaudiya Vaisnavism today.

A. Gaudiya Vaisnavism teaches that Sri Caitanya Mahaprabhu (Gaura) is Krsna and that Nadiya is nondifferent from Vrindavana. They are nondifferent in that they are constituted of the same bhava, albeit expressed differently. This Radha-bhava cannot be found in any other abode of Bhagavan.

In Vrindavana, Krsna is the perfect object of love, and in the furthest reach of Nadiya he demonstrates how to worship perfectly in the mood of Sri Radha. Gaura is the same Krsna of Vrindavana, however, the highest understanding of Gaura-tattva reveals him to be in the mood of Radha, having accepted her position as the abode of love. At the same time, in Nadiya Gaura is married to Visnupriya, who worships him and is attended to by her servant associates just as Satyabhama is attended to in Dvaraka. Gaura-ganoddesa-dipika informs us, sri-sanatana-misro'yam pura satrajito nrpah, visnupriya jagan-mata yat-kanya bhu-svarupini: "He who was King Satrajit in Krsna lila was Sanatana Mishra in Caitanya lila. The mother of the universe, the incarnation of the Lord's bhu-sakti, is his daughter Vishnupriya."

In this light, Gaura-Visnupriya are worshipped in dasya-bhava. When Gaura is worshipped along with Visnupriya, his search for his own self in the mood of Radhika is subdued, whereas in the worship of Gaura-Gadadhara it is out in the open. Nonetheless, when those who worship Gaura-Visnupriya are blessed through this worship, they may follow Gaura's Vraja-bhava as it manifests in Gaura-lila and enter the inner life of Gaura-Gadadhara and the Vraja mandala along with them in forms suitable for seva in Krsna-lila.

However, when Gaura enters Krsna-lila, Visnupriya does not transform into Radha. The reason for this is that she is Radha's expansion and not svayam-sakti Radha herself, while Radha herself is present in Gaura-lila as Gadadhara. Visnupriya worships Gaura's internal experience, his love for Radha, with respect and some distance. She does not, for example, enter the kirtana at the house of Srivasa Thakura where Gaura tastes Vraja-bhava in the company of Gadadhara. In Caitanya-lila, Gaura has stolen Radha's bhava, and thus Gadadhara follows him like his shadow, tendering to Gaura's necessity as he tries to make sense of his maddening experience.

Bhaktivinoda Thakura first installed the Deities of Gaura-Visnupriya at the birthplace (yoga-pitha) of Caitanya Mahaprabhu in Mayapura. In the vision of the Thakura, there are two sides to Gaura-lila, vaidhi-bhakti offered to Gaura-Visnupriya and raganuga-bhakti, for which the corresponding Deity is Gaura-Gadadhara. It should also be noted that although Gaura is Krsna and Gadadhara is Radha, the two do not externally relate to one another as Radha and Krsna do in their Vraja-lila. Gadadhara sees Gaura internally as Krsna–Krsna trying to experience the love of Radha that only Gadadhara knows. Thus Gadadhara is there to assist his object of love in an appropriate, corresponding form.

However, those interested in the raga-marga as taught by Sriman Mahaprabhu should not neglect the worship of Visnupriya. In his Sajjana-tosani, Thakura Bhaktivinoda writes, "If one gives up the worship of Visnupriya, one cannot claim to be a devotee of the Lord." Vishnupriya Devi is the personification of transcendental knowledge, divya Saraswati. Devotees worship her on her appearance day on the sukla pancami of the month of Magh. On the same day materialistic persons desiring material knowledge worship her partial manifestation, the goddess of learning Saraswati.

In his Jaiva Dharma Thakura Bhaktivinoda writes, "Know for certain that Sri Nimai is directly the son of Maharaja Nanda. Do not consider him separate from Krsna. Do not think that because He incarnated in Navadvipa and exhibited separate pastimes to demonstrate the process of bhajana that he is therefore Navadvipa-nagara, or the paramour of Navadvipa. If you think in that way you will ruin your bhajana…. Sri Visnupriya is the Lord's combined energies of hladhini and samvit. In other words, she is the personification of devotional service (bhakti-devi). She appeared during the advent of Sri Gaura to assist him in preaching the holy names of the Lord. Just as Sri Navadvipa, which consists of nine islands, is the personification of the nine types of devotional service, similarly, Srimati Visnupriya is also the personification of the nine types of devotional service."