Since the time of Vivekananda and Yogananda the popularity of indian thought and philosophy has been growing steadily around the world. Faith in anything which originated in vedic India is almost spontaneous. At the same time India has increasingly shown an unnatural distance towards it's vedic past by trying to imitate the American way of life. In the middle of this paradox indian merchandizers of yoga fashion are teaching gymnastics without giving information about vedic morals and lifestyles. Where will all this lead?

The need for clarification is great. What is the treasure vedic tradition could offer to a modern world? What is the true information the Vedas give about the Creator of this world? What can be learned from vedic morals and wisdom that could help our youth and family? What really represents the vedic siddhanta or knowledge? 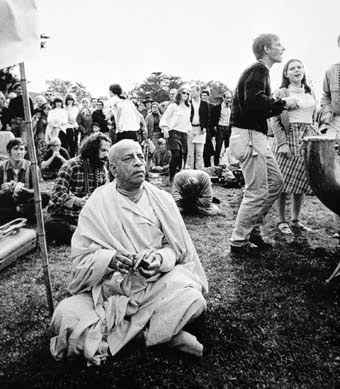 Srila Prabhupada came to the west in 1965 and established the first western bhakti yoga ashrams. He wrote in his Bhagavad gita that to deny God a personal form is not according to the vedic teachings. This type of philosophy would limit God. He stressed the path of love for God as the essencial medicine for becoming sincere in one's relationships with man and animals. He also taught that the perfection of yoga is to reach a world of eternal love after leaving this body and after having transcended material egotistic desires.

It is remarkable that years of english occupation in India did not produce a single well known british Vaishnava or follower of the vedic culture, while Srila Prabhupada in just twelve years opened 108 Krishna ashrams and got people from all over the world, even from England, to bow down and voluntarily work for the glory and welfare of India and the vedic culture. He also inspired many indians to reevaluate their own relationship to their own treasures and culture.

Today indian temples in the western world are not rare anymore and Krishna ashrams are opening, inspired by Srila Prabhpada, even 29 years after his departure from this world. Judging by this result indians should pay more attention to the devotional essense of their own culture for their own benefits as well as for the welfare of the world at large.

Pure devotion cannot be imitated like yoga exercises. It can only come about by entering into a committed relationship with a true Krishna lover by disinterested service for Krishna and humanity. A real revolution of consciousness, disconnecting ourselved from the cheating mentality, exploitation of man and animals and indifference to the sufferings of others. Obviously that is not a cheap and easy path. It requirers sacrifice and good character.

The vedic rishis who guided the saintly kings of Bharata varsa gave us the indication to stand up for the truth. If the intelligent people of India go to the west to simply get money, not caring that humanity is in lack of values, they fail to fullfill the wishes of the compassioned leaders of India's glorious past.

It would be appropriate to understand that the most basic vedic wisdom can solve most modern individual and social problems.

As you can see India has so much to give to the world. It requirers generosity to spend some of your time for the benefit of others.