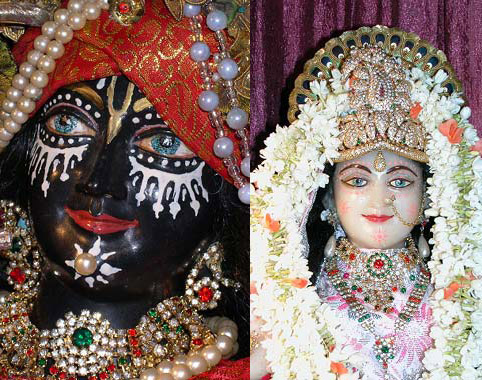 There is a great misunderstanding in the secular and religious world and especially within the Abrahamic traditions, (Judaism, Islam and Christianity) on the question of Deity worship. The English word 'idol' is usually used when describing any worship that concentrates on likenesses of demons, gods, goddesses, Visnu or Krsna. The term 'idol' has a very bad connotation in the west and conjures up images of pagans, heathens and other wild uncultured persons engaged in worshipping such things as animals or half-animal, half-human horned aberrations in the form of statues. These idols usually advocate lascivious activity like unrestricted sex, the taking of all kinds of drugs and even human sacrifice. Such idols are usually very mean spirited and lusty.

The American Heritage Dictionary describes an idol as:

1. An image used as an object of worship.
2. A false god.
3. One that is adored, often blindly or excessively.
4. Something visible but without substance.

That is the standard dictionary definition that leaves no room for doubt. Idol worship is a bad and sinful thing according to the religious.

Srila Bhaktivinoda Thakura, one of the foremost devotees of Lord Krsna in the 19th century, addresses the question of idolatry in his book Sri Caitanya Mahaprabhu, His Life and Precepts. The book was written for missionary purposes. It was Bhaktivinoda's desire to open the floodgate of love distributed by Caitanya Mahaprabhu and distribute it to the western world. The book was sent out in 1896 the very same year that Srila A.C. Bhaktivedanta Svami Prabhupada made his appearance. The booklet found its way into the library of McGill University in Canada, the library of the Royal Asiatic Society of London, and a few other highly respectable institutions.  This book is still available in many libraries in the western world.

Srila Bhaktivinoda Thakura acknowledged that there are those who object to the concept of worshipping the deity or Sri-murti (the Deity form of Lord Krsna). He wrote:

"They say, 'It is idolatry to worship Sri-murti. Sri-murti is an idol formed by an artist and introduced by no one other than Satan himself. Worshipping such an object would arouse the jealousy of God and limit His omnipotence, omniscience, and omnipresence!' To this we reply, 'Brethren! Candidly understand the question and do not allow yourself to be misled by sectarian dogmas. God is not jealous, as He is one without a second. Satan is no other than an object of the imagination or the subject of an allegory. An allegorical or imaginary being should not be allowed to act as an obstacle to the development of our loving relationship with God.'"

Those in the darkest of ignorance who want to deify evil in the form of an imaginary being called Satan are really the ones who engage in idolatry by giving substance to something imaginary. Bhaktivinoda Thakura is of the same opinion here.   It may also be added it would have been more prudent to give substance to good, rather than evil. The same people who decry the bona-fide method of Deity worship and call it idolatry, cannot give a clear or substantial description of God. However they have gone to great lengths to depict an evil devil called Satan or Lucifer, complete with horns and a three-pronged fork overseeing the fires of hell. Every person reared in the west has this image in their head, but they have no clear image of God there. We can thank Christianity more than any other sect for this irony.

"Some conception of God is there, but it is not so much developed as we find in Hindu ontology, or in the Vedas or Upanisads – in the revealed scriptures." (Divine Aspirations)

The Abrahamic religions are indeed not very developed and the Guardian of Devotion alludes that Hindu ontology, which would include the worship of so many other divinities like Siva, Durga and Hanuman, in their deity form, is superior to Christianity and Islam. What we would call mainstream Hinduism has more sound concepts of theism.  He also indirectly states the Abrahamic scripture is not revealed scripture. It was the Bible, the Torah and the Koran, all Abrahamic scriptures, and those who follow them are responsible for the grave misunderstanding concerning deity worship.

In his book, Srila Bhaktivinoda Thakura – a pure lover of Krsna with the deepest transcendental insight – discloses that God is personal and all-beautiful; His holy and perfect personality exists eternally in the spiritual world of Vaikun†ha, the transcendental abode of God. He is identical with His all-beautiful form, having such powers as omnipresence, omniscience and omnipotence, complete with six opulences in full viz. all wealth, all power, all renunciation, all wisdom, all fame and all beauty.  This disclosure is backed by volumes of transcendental revealed scripture like the Srimad Bhagavatam and Srimad Bhagavad-gita.

The pure lovers of Krsna who have seen Him face to face have left us descriptions of this most wonderful person, therefore Bhaktivinoda Thakura says,

"According to those descriptions, one delineates a Sri-murti and sees the great God of our heart there with intense pleasure. Brethren! Is that wrong or sinful?"

The acaryas coming in disciplic succession through the Brahma Madhva Gaudiya Vaisnava sampradaya teach not only is it not sinful to worship Krsna in His deity form but it is one of the paramount practices of devotion. And Krsna Himself derides those who do not recognize Him as the Supreme Lord of all that be. Those who decry Krsna and the worship of Krsna are called 'fools' by the Supreme Lord Krsna Himself. This was deliberated by the Supreme Lord at the battle of Kuruksetra 5,000 years ago. Srila Bhaktivinoda Thakura continues:

"Those who say that God has no form, either material or spiritual, and at the same time imagine a false form for worship are certainly idolatrous; but those who see the spiritual form of the Deity in their soul's eyes, carry that impression as far as possible to the mind, and then frame an emblem for the satisfaction of the material eye for continual study of the higher feeling are by no means idolatrous. When seeing a Sri-murti, do not even see the image itself, but see the spiritual model of the image and you are a pure theist. Idolatry and Sri Murti worship are two different things!"

Yes, it is a fact that idol worship does take place in this material world. The worship of many imagined entities takes place in all corners of the world from India to America. Idol worship is real and going strong. But the beautiful form of Krsna does not fall into that category. Even the forms of different demigods whose descriptions are found throughout the revealed scriptures are also a bona-fide method of worship even if not followed by the Gaudiya Vaisnava adherents. Krsna Himself states such worship is for the less intelligent but, none-the-less, such divinities do exist and by worshipping them many have attained material boons.  We must comment here on one point that is touchy in the Vaisnava world at this time. Many followers of Caitanya Mahaprabhu embrace the leaders of religious movements like Christianity that have very sketchy credentials. Not only do they have very lightweight credentials, but such movements decry the worship of demigods like Lord Siva. In fact, the worship of such demigods is far superior to the Abrahamic traditions, including Christianity that were created out of thin air with no revealed scripture or disciplic succession as backing. We might ask our readers who have some affinity for scriptures and dogmas that lack clear definition of Godhead and decries the worship of Krsna as 'idol worship' to reconsider their sentiments. As Bhaktivinoda Thakura has said,  "Do not allow yourself to be misled by sectarian dogmas."

Caitanya Mahaprabhu put much emphasis on the worship of Sri-murti and placed it on the top of the list along with association of devotees, residing in a holy dhama, hearing Srimad Bhagavatam and Chanting the Holy Name. So important is the worship of the Deity that Bhaktivnoda Thakura says,

"To tell you the truth, Sri-murti worship is the only true worship of the Deity, without which you cannot sufficiently cultivate your religious feeling. The world attracts you through your senses, and as long as you do not see God in the objects of your senses, you live in an awkward position, which scarcely helps you in procuring spiritual elevation. Place a Sri-murti in your house. Think that God Almighty is the guardian of the home. Offer food to Him and take it as His prasada (mercy). Flowers and scents should also be offered to Him and accepted as prasada. The eye, ear, nose, skin and tongue all have a spiritual culture. You do it with a holy heart and God will know it and judge you by your sincerity. If divine compassion, love and justice could be portrayed by the pencil and expressed by the chisel, then why shouldn't the personal beauty of the Deity be portrayed in poetry or in picture or expressed by the chisel for the benefit of man?"

Srila Bhaktivinoda Thakura at the time of his writing 'Sri Caitanya Mahaprabhu, His Life and Precepts' was entering into uncharted waters trying to persuade the people of the west to consider the creed of the Gaudiya Vaisnavas and to learn something about Sri Krsna Caitanya Mahaprabhu. No doubt he spoke in a way as not to offend those he was trying to bring into the fold of Mahaprabhu. But even so if we read between the lines, the Thakura makes some pretty strong statements indirectly condemning the Christians for creating an idol called the devil while criticizing the worship of bona-fide Deities. The Thakura boldly asks the Christian world to embrace and engage in the worship of Sri-murti!

Not only do the followers of Mahaprabhu worship the beautiful form of Krsna but they also are of the opinion anyone who sees such forms as material or who decry such forms are sinful miscreants. So-called scripture or dogmas and institutions that decry the worship of Krsna in his deity form are sacrilegious, not fit for a sane and sober man on the progressive path back to Godhead, they should be rejected like stool.

The example is given of the authorized mailbox. If one places letters in the government authorized mailbox the letter arrives at it's destination. However if one without the authority to do so erects his own mailbox the letters placed there will go nowhere. Similary, those on the platform of Love for God who have seen Him are qualified to install His beautiful form. Krsna accepts such a form as His own and in this way accepts our service. The prayers, offerings worship and all other forms of service reach the Supreme Lord in that authorized form.  But if one is not authorized and using his own imagination tries to establish worship then indeed that image would be valueless, such worship would bare only sour fruit as all idolatry does.

Krsna, the Lord of all that be, is all-powerful and He may appear anywhere at anytime and through any element He so chooses. If His devotee desires He appear in His Sri-murti form, He can do it.  Not only does Krsna appear to us as Sri-murti but He relishes accepting the love and devotion rendered to him by those, who, with a pure heart, serve Him selflessly in that form.

All glories to Sri-murti the transcendentally beautiful form of Krsna resplendent with all opulence and storehouse of all transcendental bliss and rasa.