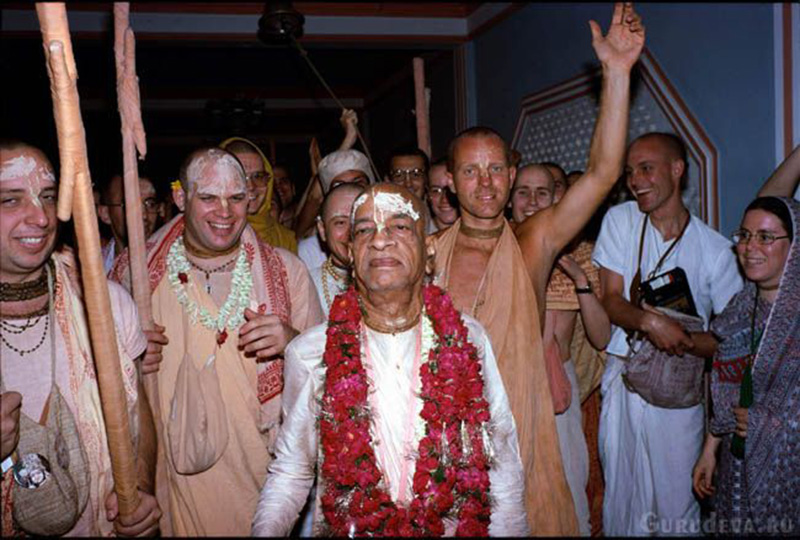 In 1971, I flew with Srila Prabhupada and several Godbrothers from New York to London. As our plane descended into Heathrow Airport, I was looking forward to seeing the ISKCON temple at 7 Bury Place and participating in the devotees’ reception for Srila Prabhupada. However, when we arrived at the airport, one of Srila Prabhupada’s suitcases was missing. It was the suitcase that contained his books of commentaries by the previous acaryas, and he used those books in his translation work. I was devastated when Syamasundara Prabhu asked me to remain behind to wait for the suitcase and bring it to the temple. As the reception party escorted Srila Prabhupada to his car, I sat dejected on a bench, waiting for the suitcase to show up.

Two hours later it was located and I caught a taxi into London. It was raining as we drove into the city, and by the time we reached the temple it was evening and dark outside. Dragging the heavy suitcase into the temple, I found a number of devotees sitting on the floor finishing the feast. When I asked for prasadam, they sheepishly replied that there was nothing left. When I asked for help to take Srila Prabhupada’s suitcase up to his room, they declined, saying that they were too full from the feast. Tired and hungry, I made an effort to pull the suitcase up the stairs to Srila Prabhupada’s room. Dazed from the exertion, I didn’t think to knock on Prabhupada’s door but simply opened it and proceeded to pull the suitcase into the room backwards.

Whirling around, I found myself face to face with His Divine Grace. I fell at his lotus feet and offered my obeisances. While reciting my prayers, I suddenly felt a strong slap on my back and heard Srila Prabhupada say a few words. After a few moments, Srila Prabhupada walked away to his bathroom and I cautiously got up. I found Nanda Kumara looking at me, his mouth open.

“Boy, did you get some mercy. Srila Prabhupada slapped you on the back. I never saw him do that before.”

I was amazed and blissful. “What did he say?”

“He told you, ‘So much endeavor in this material world, but when I take you home, back to Godhead, everything will be easy and sublime.”