Vrindavan, the land of Radha Rani, has ancient past associated with Hindu history. The “City of Temples” has more than 5000 temples to showcase the pastimes of Radha and Krishna, including temples as old as 5500 years. One of its oldest surviving temples is the Govinda Dev temple, built in 1590, with the town founded earlier in the same century.

The essence of Vrindavan was lost over time until the 16th century, when it was rediscovered by Chaitanya Mahaprabhu. In the year 1515, Chaitanya Mahaprabhu visited Vrindavana, with the purpose of locating the lost holy places associated with Lord Sri Krishna’s transcendent pastimes. Chaitanya wandered through the different sacred forests of Vrindavana in a spiritual trance of divine love. It was believed that by His divine spiritual power, He was able to locate all the important places of Krishna’s pastimes in and around Vrindavan including the seven main temples or sapta devalay, which are worshiped by Vaishnavas in the Chaitanya tradition to this day.

In 1670, the Moghal emperor Aurangazeb invaded Sri Vrindavan, he planned to destroy many temples and deface the Deities there. For this reason the principle Deities of Vraja were moved to the safe confines of the city of Jaipur in Rajasthan under the auspices of the Rajput kings. Most of the Deities remained there, such as Govindadeva, Gopinatha and Madana-mohana. 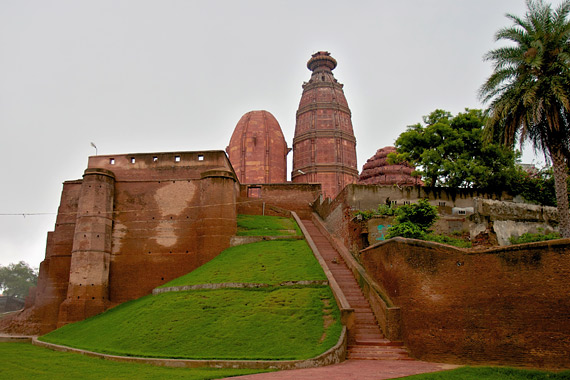 This 60 foot high temple was opened in 1580 on a 50-foot hill called Dvadasaditya Tila, next to the Yamuna. Built by Ram Das Kapur at the request of Sanatana Goswami this was the first temple to be built in Vrindavan, which at that time was just a forest. The deity of Krishna (Madana Mohana) was discovered by Sanatana Goswami. Worshiped along with Madana Mohana are Radharani and Lalita Sakhi. During the attack by Aurangzeb, the two images were taken from Vrindavan, one placed at Karauli and the other at Jaipur. Locals say that in order to complete Govardhan Yatra, it is mandatory to visit Madan Mohan Ji and the Govind Dev Ji temples.

Established in 1542 by Jiva Goswami, this temple is located at Seva Kunj. The temple is said to be located in the central of the spiritual world. The Deities of Sri Sri Radha Damodar were given to Srila Jiva Goswami by his guru, Srila Rupa Goswami Prabhupada, and have been worshiped here since then.

The founder acharya of the International Society for Krishna Consciousness, Srila Prabhupada, spent his time here meditating on his mission and doing bhajans before establishing the society.

This temple also has a small shila depicting Giriraj (Govardhan hill). Sripad Sanatan Goswami used to live in Vrindavan near Sri Radha Madanmohan temple. Everyday he would go to Goverdhan hill from Vrindavan for parikrama. When he got old, even then he carried on with this routine and continued with his parikrama. Seeing this, the Lord himself appeared before him and told him that he was happy with his devotion but that he did not need to do so any longer, and should stay at Vrindavan and serve Radha Krishna. Srila Sanatan Goswami said that if he did not go to Govardhan Hill, he felt pain and grief. So Krishna gave him a Govardhan Sila with His foot print, flute, stick and cows foot print on it and told Goswamipad that by doing four Parikramas of this Govardhan Sila with the four signs you will get the complete benefit of Govardhan Parikrama. 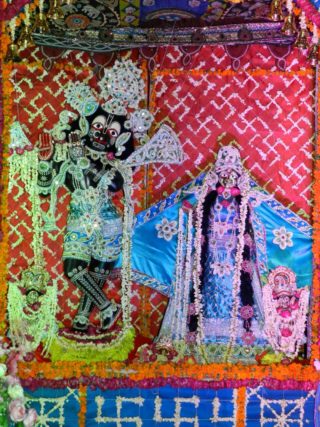 This is one of the most important temples for Gaudiya Vaishnavas. Established by Sri Syamananda Pandit the deity itself was gifted to him by Srimati Radharani, the consort of Lord Krishna, who had manifested it from her heart. 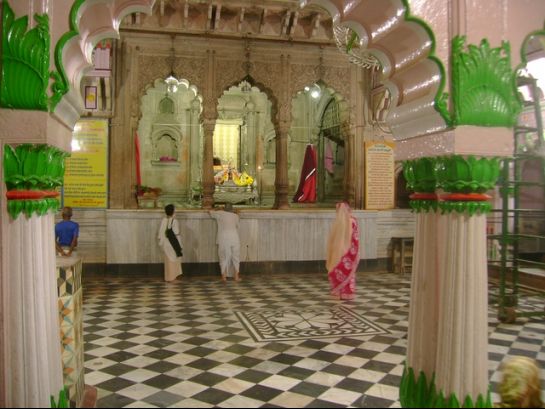 Constructed at the request of Gopala Bhatta Goswami in the sixteenth century, Radha Raman temple is one of the most exquisitely crafted and revered temples of Vrindavan “Radha Ramana” means “one who gives pleasure to Radha”, and Radha Raman is one of the few original deities still left in Vrindavan. In Nepal, Gopala Bhatta bathed in the famous Kali-Gandaki River. Upon dipping his waterpot in the river, he was surprised to see several Shaligrama shilas enter his pot. He dropped the shilas back into the river, but the shilas re-entered his pot when he refilled it.

On the Purnima (full moon) day, in the evening after offering naivedhya to his Shaligrama shilas, Gopala Bhatta put them to rest covering them with a wicker basket. Late in the night, Gopala Bhatta took a little rest. In the early morning he went to take bath in the Yamuna River. Returning from his bath, he uncovered the Shaligramas in order to render puja, and saw amongst them a Deity of Krishna playing the flute. There were now only eleven shilas and a Deity. The “Damodara shila” had manifested as the beautiful three-fold bending form of tri-bhangananda-krishna. In this way Radha Raman emerged in a perfectly shaped deity form from a sacred shaligrama shila. Devotees consider this image to be alive and that he grants a chosen family the privilege of assisting him in his daily schedule. The fires for cooking in the temple kitchen have been burning continuously since the Deity was installed over 460 years ago and the cooking still follows cookbooks from that time.

A few minutes’ walk from Vrinda Kund is Sri Radha Govindaji temple, built by Maharaja Man Singh and a general from the army of King Akbar. Maharaja Man Singh was a disciple of Raghunath Bhatta Goswami. The temple was a grand seven-story structure, with an altar of marble, silver and gold. Architecturally this temple is one of the finest in North India. A sculptured lotus flower weighing several tons decorates the main hall ceiling. It was said to have cost ten million rupees, and several thousand men were working for five full years to complete it. Akbar himself had donated the red sandstone for its construction.

In 1670, during the rule of a later Mughal king, Aurangzeb, it was plundered and destroyed leaving only three stories of the original temple. During this attack, when few stories remained, all of a sudden the ground began to shake violently and Aurangzeb’s men were terrified and ran for their lives, never to return. A replica of Govindaji is worshiped in the new Govindaji Mandir (located behind the original temple). The original Govindaji is worshiped in Jaipur. 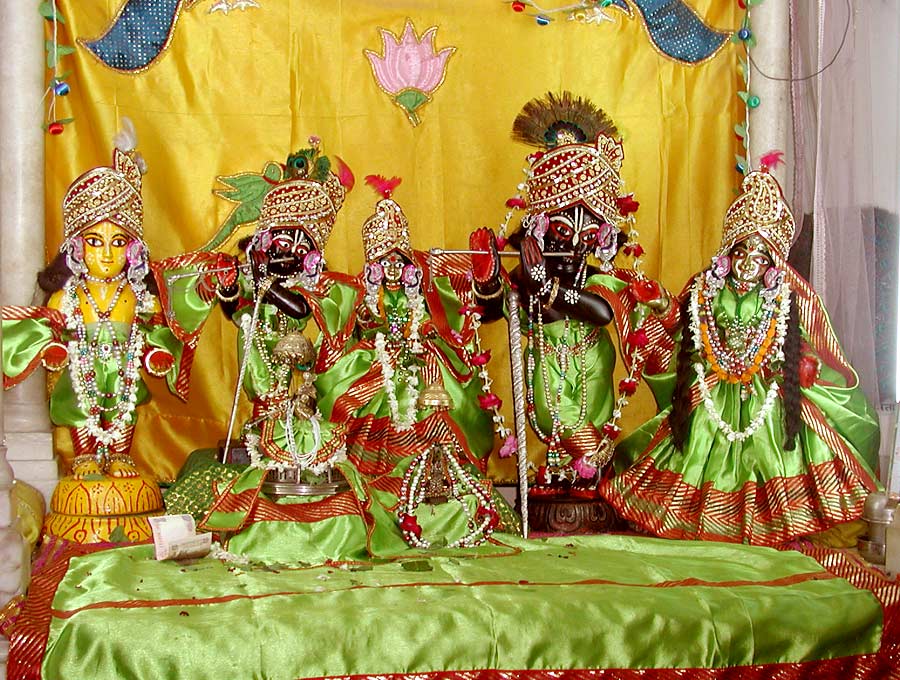 Built by Visvanath Cakravarti, a vaisnava scholar and poet, the temple houses the deity of Sri Radha Vinod worshiped by Lokanath Goswami (one of the contemporaries of the Six Goswamis), a Govardhana shila gifted by Lord Chaitanya to Raghunath Dasa Gosvami, the deity of Sri Vijaya Govinda worshiped by Baladeva Vidyabhushan, and a stone with the thumbprint of Lord Chaitanya.

There is the small Radha-Vinoda Deities of Lokanatha Gosvami, the larger Deities of Vijaya Govinda of Baladeva Vidyabhushan, and the Radha Gokulananda Deities of Viswanath Cakravarti. The small Deity of Krishna in front of Gokulananda and the Deity of Caitanya Mahaprabhu were worshiped by Narottama Dasa Thakur. Viswanath Cakravarti arranged to have this temple built. Formerly, all the Deities in this temple were worshiped alone, in their own temples. There is a Govardhana-shila in this temple that was given by Lord Caitanya to Raghunath Das Gosvami. This shila bears the thumbprint of Lord Caitanya. He used to chant while holding the shila, pressing it to His heart or eyes. The shila was always moist with Lord Caitanya’s tears. He would place it on His head or smell it. Lord Caitanya kept this shila for three years and then gave it to Raghunatha Das. 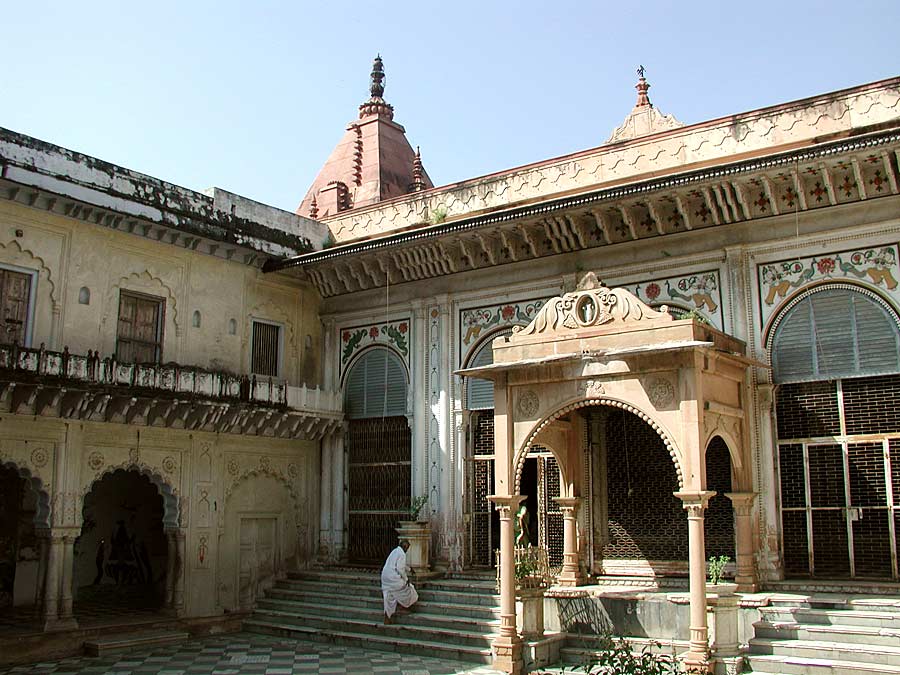 This temple is a few minutes’ walk from Govindaji’s temple, was founded by Madhu Pandit Goswami, and its marvelous construction reveals a glorious past. Gopinatha, the presiding deity was first installed 5,000 years ago by Vajranabha, Lord Krishna’s grandson, and rediscovered at Vamsi-vata by Paramananda Goswami.

During the oppression of Aurangzeb, the original deities of Gopinathji, Radhika and Jahnava also proceeded to Jaipur together with other deities. The Pratibhu Vigrahas now preside in the temple built by Nand Kumar Vasu. Jahnava Thakurani is seated on the left side of Gopinath, and Lalita Sakhi and a small deity of Radhika are seated on His right. The deity of Mahaprabhu Shri Gaurasundara is in a separate chamber.

Close to the famous Vanshivat, on the bank of the Yamuna, Shri Paramanand Bhattacharya and Madhu Pandita used to worship Shri Radha-Krishna Yugala with extreme renunciation. Once, the current of the Yamuna cut into her bank and a very beautiful deity of Shri Gopinath was revealed from under the sand. In the morning, when the devotee Paramananda came to the Yamuna to bathe, he found this exceptional deity who stole his heart. He entrusted the service of Shri Gopinath to Shri Madhu Pandita. First, Shri Gopinath resided near Vanshivat, but later on a magnificent new temple was constructed elsewhere and His service and worship continued there.