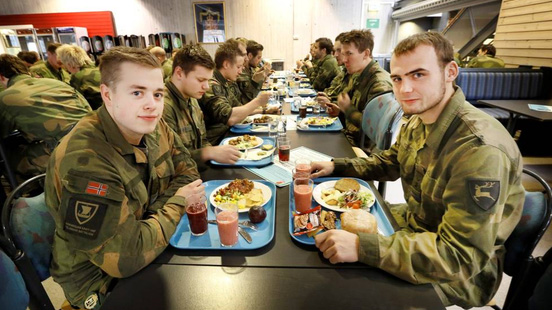 Some people combat climate change by holding grand international conferences; others, by serving up a heaping lunch buffet of falafel, couscous, and beets to a cafeteria full of hungry soldiers.

Last week, at the Rena military base 90 miles north of Oslo, the Norwegian armed forces staged its first-ever "meat-free Monday" (on a Thursday, oddly enough) as part of a larger effort to decrease the military's consumption of meat and protect the environment (in September, the U.N. Food and Agriculture Organization estimated that livestock supply chains are responsible for nearly 15 percent of all man-made greenhouse gas emissions). In one of the more unlikely ecological experiments we've seen recently, the military plans to test out the concept at other bases over the next year—and estimates that it can cut its meat consumption by more than 330,000 pounds a year if it extends meatless Mondays to all units at home and abroad.

"It seems that people don't think it's possible to be an iron man as a vegetarian, it seems like they don't think a good soldier can be a vegetarian, but we have a lot of soldiers who are vegetarian, so I know it's possible," says Pal Stenberg, a nutritionist and navy commander who heads up the army's catering division. "We have to use a lot of effort in communicating both the environmental benefits and the health benefits."

Stenberg, who is in charge of feeding 10,000 Norwegian troops 35,000 meals per day, says the soldiers in Rena, who received questionnaires to fill out at the end of last week's lunch, have generally responded well to the initiative.

"They seemed to eat a lot of it, until journalists asked, "You know it’s not meat in there?'" Stenberg tells me. "And then they said, 'What?'" (The Norwegian newspaper Aftenposten spotted one soldier who was convinced the mysterious soy product in his taco was ground beef.)

This isn't the Norwegian military's first push to be more environmentally friendly; Stenberg says the armed forces, mimicking national targets, have already met a goal of carving out 15 percent of the catering budget for organic food.

And the experiment has Norwegian politicians talking—and arguing. This week, one lawmaker from the country's Socialist Left Party urged parliament to adopt meatless Mondays as well. That drew a fiery response from right-wing politician Per Sandberg. "Why not Tuesday's?" Sandberg asked. "Both meat and fish are on Parliament's menu. People have the sense to choose for themselves."

Stenberg, who, for the record, is not a vegetarian himself, responds to that criticism by arguing that institutions like the armed forces "are supposed to be ahead of others with regard to environmentally friendly, ethical standards as well as healthy food. That's our vision."

But it's not a vision everyone in Norway shares. Andrea Bruer with the Oslo-based Norwegian Vegan Society points out that while Norwegians are becoming more aware of meat's harmful effects on the environment and climate issues more generally (the Norwegian Green Party won its first parliamentary seat this fall), a 2005 report found that only 1 to 2 percent of Norwegians are vegetarians (other studies suggest this figure may be slightly higher).

During a recent trip to neighboring Sweden, she notes, she found stores selling ready-to-eat vegan hot dogs. “Go across the border to Norway," she adds, "and there's lots of meat and potatoes staring you in the face.” According to the Norwegian environmental group The Future in Our Hands, the average Norwegian eats more than 1,200 animals in his or her lifetime, including 1,147 chickens, 22 sheep, six cattle, and 2.6 deer.

So, might the U.S. military, which isn't exactly known for catering to vegetarians, follow suit? Before we get ahead of ourselves, it's worth keeping in mind that Norwegian military officials aren't even sure their flirtation with vegetarianism will pan out.

"We need to get our soldiers to understand why they should eat more environmentally friendly," Stenberg says. "If we don't, the project will fail."