Sri Vrindavan Das Thakura's mother's name was Sri Narayani Devi. Narayani Devi was the daughter of Srivas Thakura's brother. When Lord Sri Caitanya Mahaprabhu revealed his divinity in the house of Srivasa, showing his true self to the assembled devotees there, Narayani Devi was only a four year-old girl. In the Caitanya Bhagavata it is written: "The golden moon, Sri Gauranga, revealed himself as the soul of all souls. At that time he ordered Narayani to chant the name of Krishna. Although she was only four years old, she became mad with love of God. And crying, "O Krishna!" she swooned in ecstasy. As she laid on the ground in a trance of bliss, her eyes filled with tears, overwhelmed with divine love."

Narayani Devi's son was Vrindavana Das Thakura. In the Caitanya Bhagavata he has written of how Narayani was the object of Sri Caitanya Mahaprabhu's affection: "As a result of her great piety, Narayani would get whatever remnants the Lord might leave after eating. Although she was only an unschooled little girl, the Lord would favour Srivas Thakur's niece by giving her the leftovers of food touched by His holy lips."

Indeed it was by the mercy of Lord Caitanya that Vrindavan dasa Thakura took birth in the womb of Narayani. Sri Gauranga and Sri Nityananda were the very life and soul of Vrindavana dasa Thakura.

Gaura Ganodesa Dipika describes that Narayani was previously Kilimbika, the younger sister of Lord Sri Krishna's nursemaid, Ambika. It is also explained that Ambika became Malini Devi, the wife of Srivasa Pandita. Therefore, Ambika and Kilimbika reappeared in Gauranga Mahaprabhu's pastimes as Malini Devi and Narayani Devi, in their same roles as maidservants.

After assuring everyone there was nothing to fear from Chand Kazi's soldiers, Gauranga Mahaprabhu divulged His plans to defeat the Kazi and his ban on Harinam Sankirtan. First, as the Supersoul, He would change the Kazi's heart. Then, if necessary, He would defeat all the Kazi's priests to establish supremacy of chanting the Holy Name: Hare Krishna Hare Krishna Krishna Krishna Hare Hare / Hare Rama Hare Rama Rama Rama Hare Hare. And to prove that supremacy, He would make all people and animals chant Hare Krishna in sublime ecstasy. Seeing Narayani, Gaurahari then said, "Narayani! Chant Krishna's Name and cry in ecstasy." At this, little Narayani became agitated with spiritual emotions and cried out, "O Krishna," while rolling around, absorbed in Krishna-prema.

Gaurahari always gave Narayani special attention whenever He saw her, and personally gave her betel nut remnants from His mouth. Sometime after Mahaprabhu left Mayapur, Narayani married and moved to another village. She was pregnant when her husband suddenly died and this is when Malini Devi brought her to Mamgachhi to live.

Sri Vrindavan Das Thakura is an incarnation of Krishna Dvaipayana Vyasa. Vedavyasa wrote the Vedas. He then wrote Srimad Bhagavatam, the mature fruit of the Vedas that describes Lord Krishna's pastimes. Then, as Vrindavan Das Thakura, Vyasdeva wrote Sri Caitanya Bhagavata (previously known as Caitanya Mangala); it describes Krishna's pastimes as Gaurahari in Navadvipa-Mayapur. This most enchanting rendition of Gauranga Mahaprabhu's pastimes gives the conclusion of Srimad Bhagavatam — Bhakti, the devotional service to Lord Sri Krishna.

Bhaktisiddhanta Sarasvati Thakura wrote in his commentary to Caitanya Bhagavata, "At the ancestral home of Malini Devi, Vrindavan Das played as a small boy growing up. There he was nourished and cared for just like a valuable gem." Vrindavan Das Thakura took initiation from Lord Nityananda at 16 years of age and went travelling and preaching with Him. When they were in Denur, in the district of Burdwan, Lord Nityananda told him to stay and preach there and so he never personally saw Lord Caitanya. He went to the first Gaura Purnima festival at Kheturi-grama, accompanying Sri Jahnava Devi, the eternal consort of Lord Nityananda.

"Vrndavana Dasa Thakura is Lord Nityananda's favourite devotee. And therefore he is the original Vyasadeva in describing the pas¬times of Sri Caitanya Mahaprabhu."

"Hearing Caitanya Bhagavata destroys all misfortune. By reading Caitanya Bhagavata one will understand the glories of Lord Caitanya and Lord Nityananda. And he will attain the highest perfection of knowledge-pure love of Krishna. "Since such a wonderful book could not be written by a human being, it seems that Sri Caitanya Mahaprabhu Himself has spoken it through the mouth of Srila Vrindavana Dasa Thakura. I offer millions of respectful obeisances to the lotus feet of Vrindavana Dasa Thakura. By compiling such a valuable book he has delivered everyone from the cycle of birth and death." (Caitanya-Caritamrta Adi 8.33-42)

Sri Vrindavan Das Thakura's samadhi is in the 64 Samadhis Area of Sridham Vrindavana.

Nearby places to visit at Mamgachhi:

#1) Sri Vasudeva Dutta's house: This is 50 meters away from Sri Vrindavan Das Thakura's birthplace. Vasudeva Datta was a very liberal Vaisnava who would spend all his money for the worship of his beloved Deity, Madana Gopala, without any consideration of future expenses in spite of the difficulties for his family. Sri Caitanya Mahaprabhu has such affection for Vasudeva Datta, He vowed on 3 separate occasions that He belonged to Vasudeva Datta. He would say, "I am only Vasudeva Datta's man. My body is meant only to please Vasudeva Datta and he can sell me anywhere."

#3) Siddha-Bakul tree: In the courtyard of Sri Sarangapani's house there is a neem tree also known as Siddha-Bakul. This tree was totally dried up but only until Lord Sri Caitanya Mahaprabhu embraced this tree. The tree came back to life by Lord Gauranga Mahaprabhu's embrace. Lord Caitanya used to come here regularly along with His associates to perform Harinam Sankirtan.

#2) Sri Vrindavan Das Thakura's birthplace can also be visited by taking a rickshaw from Navadvipa Ghat. It will take about 45minutes to reach this place. Packaged tours can also be arranged by contacting Mayapur Tourism office at: Mayapurtours@gmail.com. 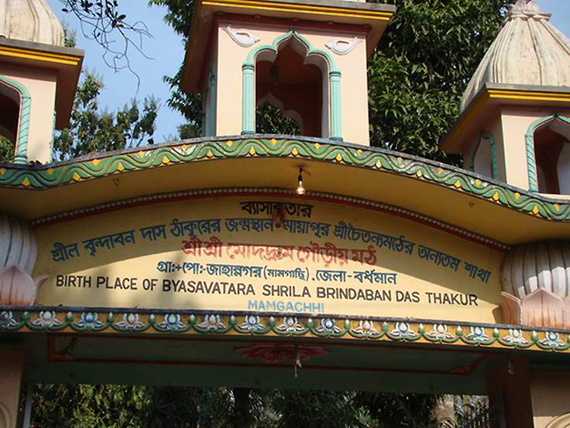 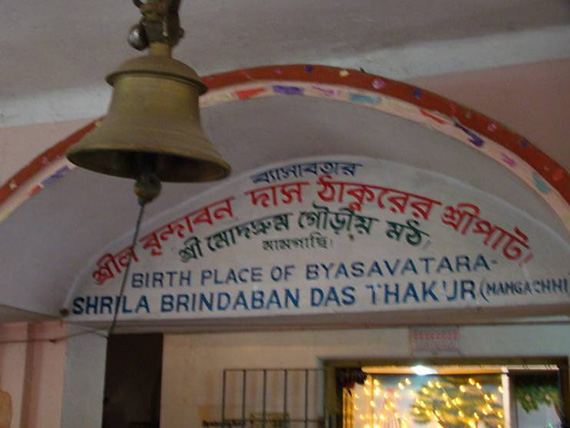 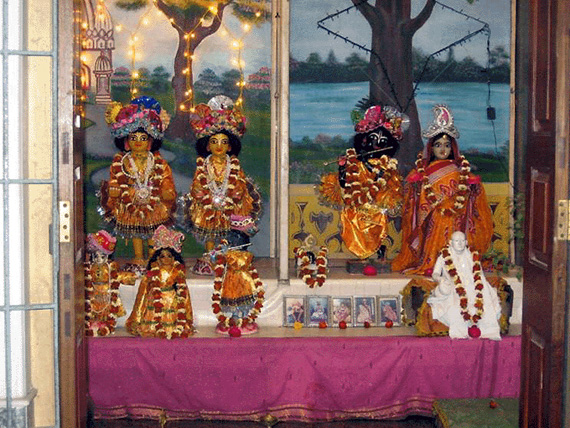 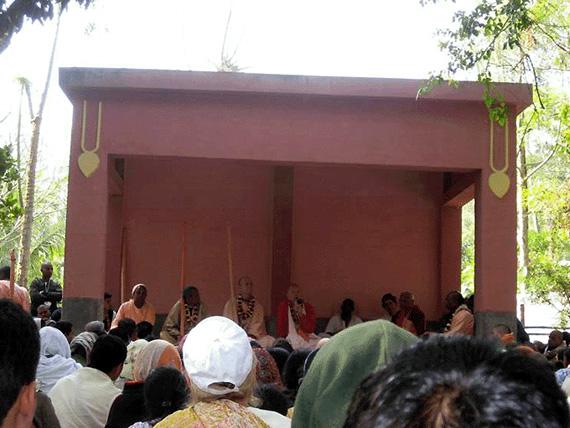