The Hungarian Deputy Prime Minister Dr. Zsolt Semjen, Deputy Speaker of Hungarian Parliament Janos Latorcai, along with the Hungarian Ambassador to India and seven other Hungarian government officials visited ISKCON Delhi on the 6th of May. 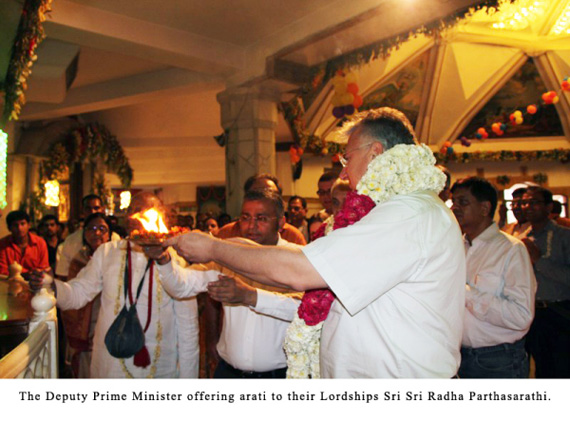 The delegation arrived at 5.30 PM, and they were greeted at the main entrance of Sri Sri Radha Parathasarathi Temple by Gopal Krishna Goswami. There were several other senior devotees and well-wishers also present at the entrance, such as Vedavyasa Das (Chairman – Prakash Group of companies), Piyush Goyal (Chairman – Goyal group of companies), Rajesh Sharma (Deputy Director – ASSOCHAM), Meera Goyal (Chairman- Sri Radha Parthasarathi Steering Committee) and several other established businessmen connected to Delhi temple were present.

For Mr.Semjen's visit, thirty additional policemen from the Delhi police were deployed all around the temple campus.

The tour began with Gopal Krishna Goswami showing the delegation the auditorium in the museum block used for cultural programs and events. From there they were led to the Vedic Museum, starting with the Bhagavad Gita exhibit, presenting the teaching of the Gita in an animatronics and visual format. Then the group headed to second floor of the museum which presents the Mahabharat, an original art gallery on Ramayan painted by international devotees, and the exhibits on Vedic sciences. Here the Deputy Prime Minister commented that he was aware of the ancient Mahabharat, and as we passed through the Ramayan art gallery he appreciated the paintings.

Then the members of the delegation were then led to the temple for the darshan of their Lordships. A special pathway was created solely for their movement. The dignitaries were brought before the altar, where the temple priest greeted them by chanting Vedic mantras for auspiciousness and wellbeing of all. Then Mr.Semjen, the Deputy Speaker of Parliament and the Hungarian ambassador to India performed an arati to their Lordships, and all the dignitaries were offered a Maha garland.

They were quite pleased and amazed at the same time seeing the nearly 500 devotees who were seated in the temple hall engaged in a melodious kirtan that was led by the temple brahmacaris.

They were then brought to the VIP room and offered prasadam. Dr. Zsolt Semjen gave a speech for 10 minutes and praised ISKCON's activities in Hungary and
worldwide. He explained that the Hungarians are very respectful to the minorities also.
After his talk, Gopal Krishna Goswami gave a speech in which he appreciated the Hungarian people and thanked the Hungarian government for restoring the recognized church status of ISKCON. He then briefed the dignitaries about the programs in Delhi and pan India, such as the Mid Day Meal.

Mr. Semjen then presented Gopal Krishna Goswami with a silver medallion with the Hungarian emblem inscribed on it and a crockery set, who in turn, presented the Dr. Semjen with a Darshan Book.

The Deputy Prime Minister thanked Gopal Krishna Goswami and said he was indeed very pleased that he had come here and assured he would try to come again.