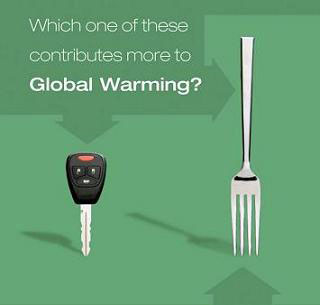 It is one of the great failings of the environmental movement—and successes of the food lobby—that most people have no idea that bacon cheeseburgers have anything to do with starving babies, or climate change. Meat production is incredibly energy intensive. According to the U.N.'s Food and Agriculture Organization, meat production accounts for 18% of annual greenhouse-gas emissions — more than transportation, which accounts for roughly 14%. What's more, millions of acres of rain forest are cleared each year for cattle ranchers and suppliers of animal feed, wiping out one of the world's great "carbon sinks" and further accelerating climate change. A simultaneous problem is that meat production is also incredibly energy inefficient. We feed far more calories to cattle in the form of grain than we consume from their flesh. In a world where hundreds of millions of people go hungry, we snatch food from the mouths of starving babies and feed it to plump beasts.

Anyone doubting the severity of the issue would do well to spend a few hours browsing through the collection of 21 studies published today in the journal Philosophical Transactions of the Royal Society B. The special issue, published by the Royal Society and overseen by the UK government chief scientist John Beggington, looks at the issue of food security in 2050—by then, the population of the earth is predicted to reach around 9 billion, meaning that global food supplies will need to increase by as much as 70% to meet increased demand. Clearly that's not possible if all 9 billion people want to eat bacon cheese burgers.

The special issue looks at various technological innovations that could help tackle food scarcity, including the possibility of growing meat in test tubes or using nanotechnology to deliver medication to livestock. It also talks about the importance of reducing food waste, particularly in developed countries (we end up throwing away a third of our food). Some of the scientists in the issue express optimism that global food security is achievable. And the issue points out that there will be some benefits from global warming when it comes to food production: extra carbon dioxide in the air could actually help increase yields and reduce water consumption, according to one study by a team of scientists at Rothamsted, a British agricultural research center. The Guardian offers a good summary of the entire special publication here.

There's no doubt that the task of feeding the world and tackling climate change would be helped if people fortunate enough to afford to eat meat decided to stop doing so. In 2008, Rajendra Pachauri, chairman of the U.N. Intergovernmental Panel on Climate Change, suggested that the most useful step ordinary citizens could take to help combat climate change would be to embrace a vegetarian diet. Even meat reduction can be useful: in Belgium, the Flemish city of Ghent has designated every Thursday as "Veggiedag" — Veggie Day — calling for meat-free meals to be served in schools and public buildings, and encouraging vegetarianism among citizens by promoting vegetarian eateries and offering advice on how to follow a herbivorous diet.

Maybe it's time to follow the lead of the enlightened citizens of Ghent. In his great profile this week of the novelist Jonathan Franzen, TIME's Lev Grossman writes about how Franzen believes Americans would do well to adjust their conception of the concept of "freedom." To Franzen, constraints can actually be liberating. I know what he means. When I stopped eating meat, I felt free from the guilt of eating meat. By constraining my freedom of choice, I felt more free. So altruism, in a sense, can be self-serving and liberating. That's an alignment of incentives that even the most red-blooded, meat-loving American could appreciate.